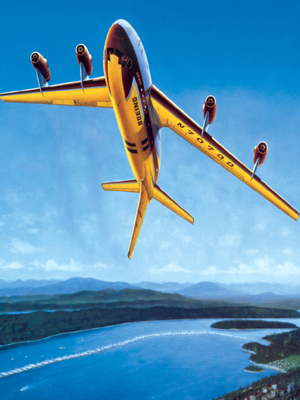 In the movie, Captain Whitaker flips his twin-engine 150-seat MD-88 on its back to keep it flying longer to avoid crashing into a neighborhood before it makes a crash landing – right way up – in an empty field.

The scene, a Hollywood masterpiece of special effects, has people asking can an airliner fly upside down. The answer is yes for a “little” bit!

Unlike military fighters, commercial planes do not have the engine power for sustained inverted flight and rely on lift from the wings.

Boeing, which in 1997 merged with McDonnell Douglas, builders of the MD-88, was very clear when the movie was released: “The MD-80 series cannot sustain inverted flight. The MD-80, as with all commercial airliners, was designed to fly upright. Commercial airliners are only tested and certified for upright flight.”

However, one Boeing aircraft has flown upside down – twice!

The highlight, before the power boat race was to be a fly-by of the “Dash-80” Boeing 707 prototype. But to impress the chiefs of the world’s airlines, Boeing’s legendary test pilot “Tex” Johnston put the Dash-80 into a 1G roll which, while not overstressing the airframe, gave Boeing’s then-President Bill Allen severe heart palpitations.

Not content with one roll, and in case any of the airline executives thought they were seeing things, Tex brought the Dash-80 around again and repeated the maneuver. The next day Tex quipped to Allen when asked about the barrel roll, “I was just selling airplanes.”

The famous barrel roll was made even more famous when commemorated on canvas by famous artist – and Airlineratings.com US Bureau Chief – Mike Machat