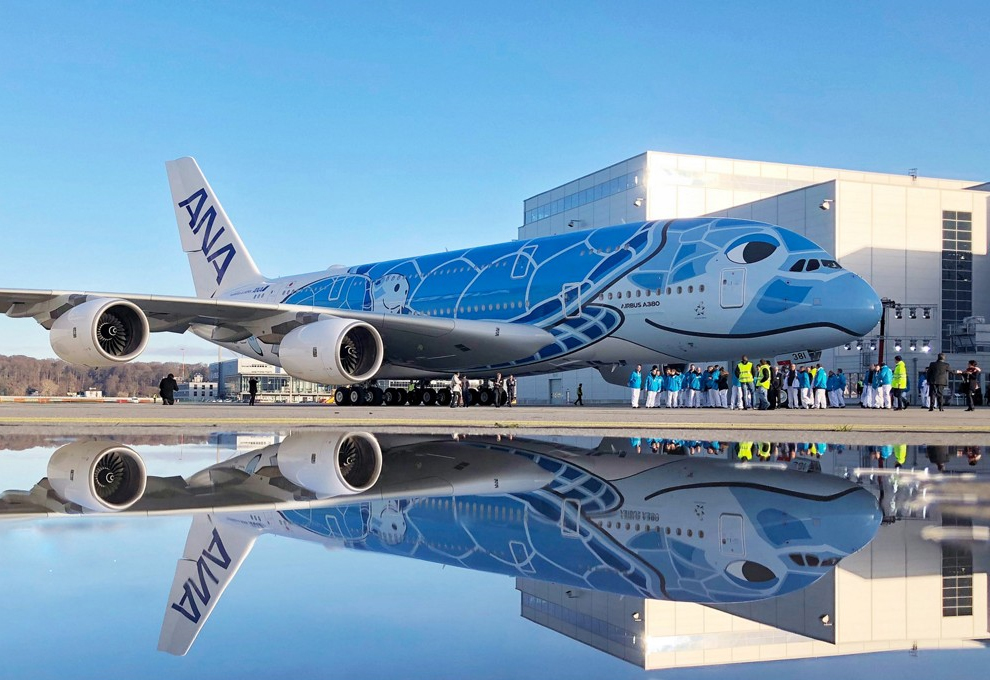 ANA’s A380 is the most complex aircraft paint job ever done by Airbus taking 8,000 man hours and 21 days but the giant aerospace company is happy as, finally, it is delivering the superjumbo to Japan.

Japan was always on top of the list of markets where Airbus hoped to sell its giant double-decker A380.

It wasn’t to be, though Japan had pioneered special short-range Boeing 747s with over 600 seats for domestic flights decades ago. The A380 is certified for up to 853 passengers, but to Airbus’s disappointment, Japanese carriers never warmed to the A380.

Initially, the only customer was Skymark Airlines, a low-cost carrier that went bankrupt before it could take its two ordered aircraft, which were already assembled and in the early stages of being painted. Ultimately Emirates took the two airframes.

But in January 2016, finally, a big name among Japanese airlines ordered the A380 with ANA going for three aircraft. Not the order boom from the Far East Airbus had bet on, but at least a start. “We all hope there still will be more orders from Japan,” Didier Evrard, Airbus Head of Programmes told airline ratings on Thursday in Hamburg at the Roll-Out event for the first of ANA’s A380s from the paint shop.

READ: Boeing will launch its 797 – a plane passengers will love

ANA has purchased the A380s specifically for its heavily-traveled leisure route from Tokyo to Hawaii. To come up with a suitable special livery for the aircraft ANA held a competition for the public resulting in 2,197 entries.

The winner was Chihiro Masuoka, it was his idea to create a family of “flying Honu”, the endangered Green Sea Turtles living around Hawaii, also a symbol of good fortune and prosperity.

The basic design of all aircraft is almost identical, with one huge, one large and one small turtle adorning each fuselage. The difference is the color, the first one called “Lani” (blue sky) was unveiled now, appearing in blue.

The others will be painted in emerald green called “Kai” (meaning ocean) and in orange, called “Ka La”, Hawaiian for sunset.

“This was the most difficult livery we have ever applied to an A380,” said Ralph Maurer, head of the paint center in Hamburg. “We needed 16 different colors and had to use 930 stencils to be able to paint the design onto the fuselage, normally we use about 150.”

The whole fuselage surface measures about 1,500 square meters, and while the 600 extra kilos in weight the paint job adds to the aircraft are within the normal range, the 8,000 man hours of work time it took to paint the ANA scheme within 21 days were considerably above average.

Basic liveries can be applied in just 13 days. Airbus didn’t use decals for the ANA livery, but painstakingly spray-painted layer after layer.

The first ANA A380 (serial number 262) will start to serve the Narita to Honolulu route on May 24 of next year with three weekly round-trips, being increased to ten on arrival of the second A380 in July.

The cabins will be fitted with 520 seats in four classes, the high seat count is second only to Emirates’ high density 615-seat A380. The upper deck is for premium customers only, seating eight in First Class, 56 in Business and 73 in Premium Economy.

The main deck features 383 Economy seats, of which the last six rows features “couch” seats, similar to Air New Zealand-pioneered Skycouches. The big aircraft is in line with Japan’s ambitious tourism growth targets, aiming at receiving 40 million visitors by 2020, supposedly boosted by the Summer Olympic Games in Tokyo that year.

ANA wants to encourage European visitors to fly to Hawaii via Japan instead of transiting in North America, as it will soon serve seven European cities (including Vienna from February 17th).

The total flight time via Japan (about twelve hours from Europe, about eight hours to Hawaii) is considerably longer than via the US or Canada.