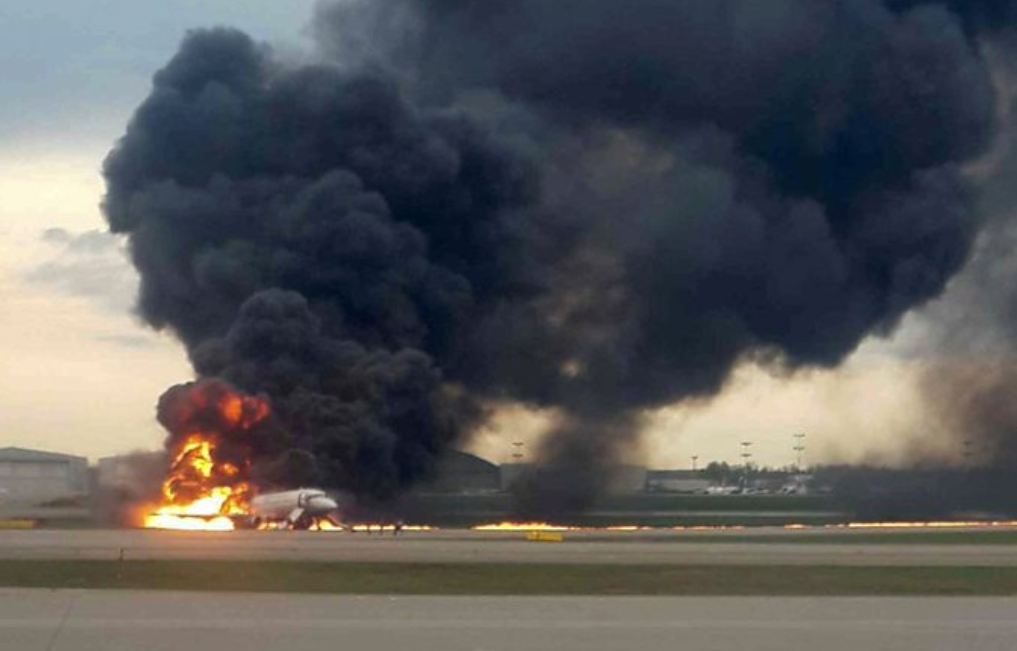 The death toll from an Aeroflot plane fire has risen to 41, according to a statement issued by investigators.

The Aeroflot Sukhoi Superjet 100-95, operating flight SU-1492 from Moscow Sheremetyevo to Murmansk (Russia) with 73 passengers and 5 crew, crashed at Sheremetyevo.

A statement issued by the Russian Investigative Committee and reported by Euronews said  37 had survived.

It said two children were among the dead and at least six people were reported injured.

The survivors exited the plane via emergency slides at the front and there were reports of a flight attendant desperately trying open the door at the back of the aircraft as it was engulfed in flames.

Aeroflot issued a list of the names of 33 surviving passengers, including five that were hospitalized, but said the list was incomplete.

The airline said the crew did everything possible to save passengers.

“The aircraft was evacuated in 55 seconds, compared to the industry norm of 90 seconds,” it said. “The captain was the last to leave the burning aircraft.”

It confirmed “malfunctions” on the plane were detected shortly after takeoff and the engines caught fire after landing but said this “was swiftly extinguished”.

The plane took off but stopped its climb at about a 1000ft when the pilot’s declared loss of radio communication first, and later emergency via transponder codes.

It returned to the airport for what reports described as a hard landing on runway 24L at 18:31 local time.

Observers said the aircraft bounced and the undercarriage collapsed after which the fire broke out.

The pilot said the crew did not have problems during descent and they had followed the flight manual.

The jet still had a full load of fuel and while Evdokimov said the pilots followed the protocol for an overweight landing, RT said he suggested the bumpy landing could have ignited the fire.

“They were always with us, helping people to climb the slide and get out of the cabin full os smoke…,” he said. “It was dark and incredibly hot inside.”

“Most occupants were able to evacuate the aircraft via both front door emergency slides, the flight crew escaped via the escape ropes through the cockpit windows, it is unknown how many injuries occurred. The aircraft’s tail section completely burned down and was destroyed.

However, once again passengers insisted on taking bags off with them,  potentially slowing the evacuation process.

READ: Grab for bags could cause airfares to triple.

The picture and video below highlight this. Note passenger at left and passengers in front of the nose of the plane.

BREAKING: Panicked passengers rushing to evacuate a burning Aeroflot plane at Moscow’s Sheremetyevo Airport after the Sukhoi Superjet-100 made a mind-blowing fiery crash-landing from the second attempt. Injuries reported. Video Via @bazabazon pic.twitter.com/Fa5UAUEHop

Emergency services reported the fire was extinguished about 45 minutes after landing.

The BBC reported that one witness saying it was a “miracle” anyone escaped the jet, which was reportedly carrying 78 passengers.

It added that the crew issued a distress signal shortly after departure from Moscow’s Sheremetyevo airport.

The Sukhoi Superjet 100 is a regional jet that entered service in 2011. It has been involved in one other fatal accident involving a  2012 demonstration flight that hit a mountain in Indonesia and killed all 45 people on board.

Sukhoi issued a statement expressing its condolences to the families and loved ones of people who died and said its representatives were taking part in the investigation.

It said the crashed aircraft left the factory in August 2017, and underwent scheduled maintenance at the beginning of April this year.