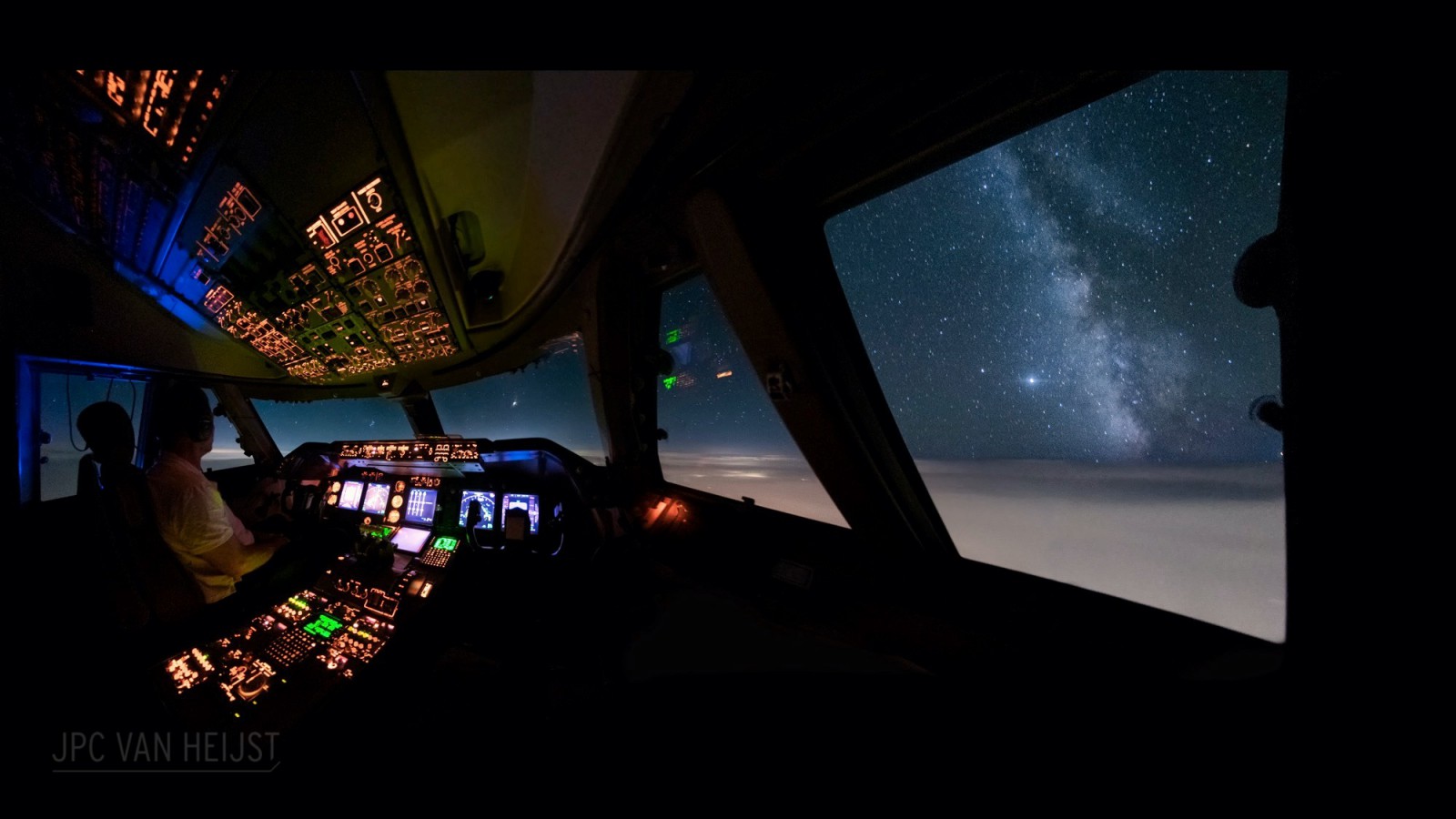 Billions and billions of stars have been captured from “spaceship 747” by pilot  Christiaan van Heijst as he speeds vital cargo across the globe.
Christiaan takes up the story…

Over ten million superclusters in the observable universe. Each containing tens- or even hundred thousands of galaxies. Each containing hundreds of billions of stars. Each star home to multiple planets, most likely.

Punching a few numbers on my calculator, while eating my steak with veggies, presents me a rough number of 10^25 planets (or 10,000,000,000,000,000,000,000,000). Give or take a dozen. Counting only those that orbit around stars: an unknown number of orphaned planets have been ejected by their sun since the beginning of time, floating around in the deep void. And I’m not even taking into account all the potential life-friendly moons.

Numbers like these can easily trick one to believe that intelligent and space-faring lifeforms MUST, therefore, be the norm. But I have the impression most people overlook the unimaginable time-scales involved. Planets and stars have a rather limited life-span on cosmic scales and with the only known place where life actually emerged (Earth), it took almost until the end of our planet’s lifespan before intelligence started to evolve.

Geoffrey Thomas discusses new safety ratings on Sky News.
SUBSCRIBE to enhanced safety ratings including COVID-19 ratings
That means that even if life starts on a planet or moon (and the chances of that happening are simply unknown), it takes an extraordinarily long time for it to eventually become intelligent. Is life common and teeming out there? Or are we unique in a sterile and lifeless universe? No-one knows and I’m open to either. Both invite a wide range of new questions to be explored and enjoyed.

My colleague and I discussed a wide range of topics the last few days. From technical glitches of the 747 and fuel decisions to more important things like relationships, food, human nature, and life.

We dimmed all lights after sunset and quietly enjoyed the night sky unfolding before our windows.

A moonless night revealed billions of stars, the bright core of the galaxy, a handful of planets, and all of the adventures that are waiting to be experienced out there one day.Technical data: Nikon D850, 10.5mm Fisheye, f/2.8, 13 seconds, ISO 8000.