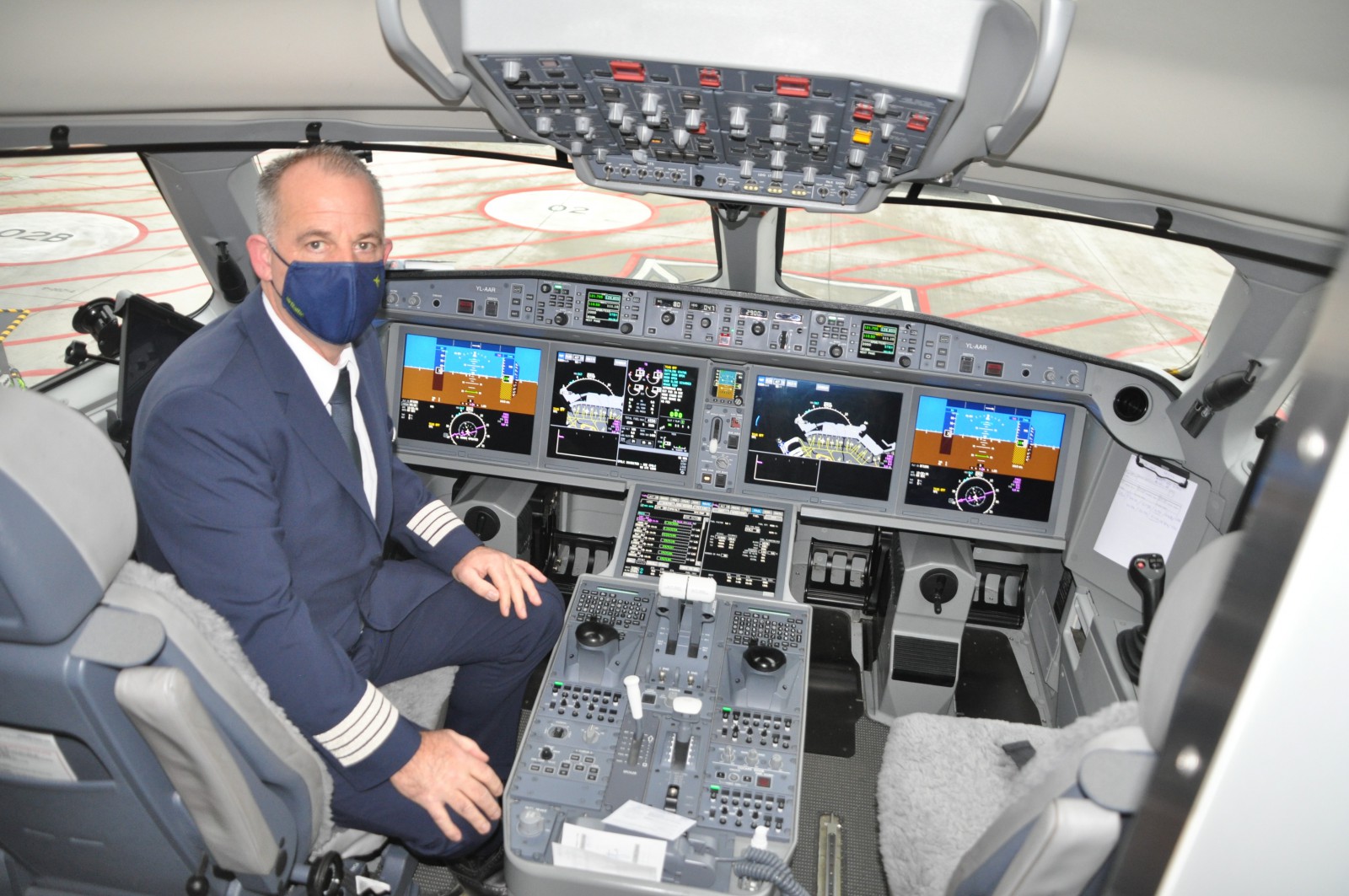 Air Baltic CEO Martin Gauss is at the control both of his airline and its A220s.

Asked recently on which airport he’d love to land most, given a choice, Martin Gauss, without hesitation, said “Sydney”.

He’s been to the city he now misses several times, most notably in October 2019 on a promotional tour to the Pacific on the Airbus A220.

That brought his aircraft in Air Baltic livery nose to nose with a Qantas A380, and CEO Alan Joyce joined him for a demo flight. At the time, Gauss was riding as a passenger.

“For Australia, that would be a perfect aircraft. And I’m still thinking that Qantas might one day go for it”, he said this week from Latvia’s capital Riga in an online interview format called CAPA live, airing from Sydney.

While consultancy CAPA claimed their feed was live, in reality, Martin Gauss at exactly that time was sitting in the left seat of one of his company’s Airbus A220 jets several thousand meters above the Baltic Sea, piloting flight BT 251 from Riga to Hamburg.

As both Latvia and Germany currently have strict travel restrictions, Airlineratings.com was only able to meet with him during the layover on the aircraft while at Hamburg airport.

BELOW; Video of Martin Gauss getting his type rating.

“It is only my sixth flight with passengers”, a clearly delighted Gauss beamed. The fact that their CEO is, as far as anyone knows, currently the only boss of a commercial airline flying his or her company’s airliners has been a centerpiece of Air Baltic’s PR efforts since Gauss received his type rating in October.

He had started his conversion training in December 2019 but due to the pandemic, everything took longer. Air Baltic had completely shut down all flights for two months from March, “but during that time I spent lots of time in our simulator,” Gauss recalls.

Martin Gauss has been in aviation most of his life. The 52year-old German started out as a pilot flying Boeing 737s for then Deutsche BA, former German offspring of British Airways. Later he also joined the airline’s management team but kept his license current, also when he joined Air Baltic in 2011.

“I have accumulated over 8,000 flight hours over the years,” reports Gauss. Very early on, when nobody would bet on Bombardier of Canada to actually bring its regional jet called C Series at the time to market, Gauss strongly believed in its concept and placed a major order in 2012.

Today, Air Baltic is the first all-A220 airline in the world, currently operating 23 aircraft, two more are coming still in December. The total order stands at 50 A220-300s and options for a further 30, and Gauss confirms there are no changes to this plan.

During Covid, the airline phased out its two other aircraft types, Boeing 737-300 and Dash 8-Q400. Currently Gauss, as any other line pilot after receiving a new type rating, flies under the supervision of a training captain on the right seat. On this rotation to Hamburg, that role fell to another German, Air Baltic’s chief pilot.

“When I go flying, my role as CEO is dormant, but also the other way round, when I lead the airline I’m not a pilot, and leading the company is my priority,” says Gauss, “so I will only fly a limited amount of hours.”

Of course in the cockpit, the usual and mandatory crew coordination rules apply, and not the chain of command that would otherwise be used when he talks as the CEO to his employees. “There are many good airline CEOs that are not pilots themselves,” Gauss stresses, “but of course it can be an advantage to know both sides.” The A220 is a particularly appealing aircraft to fly, “but technologically it’s worlds apart from the 737 Classic that I used fly.”

Martin Gauss has never made a secret of how much he likes the new aircraft, never missing an air show in recent years to promote what is now an Airbus type. The pandemic has made the A220 even better suited to current market requirements, the CEO-cum-pilot says.

“With 145 seats and being able to fly shorter and longer routes, this is certainly the perfect aircraft for the times, a winner in the pandemic. Currently, even at load factors of 30 percent on average, we are making a slight profit with it, it’ll be very suitable to reopen destinations soon when there is not that much demand yet.”

Air Baltic is currently offering less than half of its usual network and only with 20 percent of its capacity. “To serve that we only need eleven aircraft, but none of our 23 A220s is in long-term storage, we all get to fly them on a rotating basis”, the CEO points out.

Airline bosses flying commercially themselves are a surprisingly rare breed. Both former BA and IAG boss (and soon-to-be IATA Secretary-General) Willie Walsh and Lufthansa’s CEO Carsten Spohr started their careers as airline pilots but didn’t fly anymore as head of an airline.

Alaska Airlines’ CEO Brad Tilden holds a commercial pilot’s license but doesn’t fly for his or any other airline. The most well known CEO-pilot was probably former Formula 1 race driver Niki Lauda from Austria, who often used to be in command of his company’s scheduled flights before the airline merged with Austrian Airlines.

In 2003 he founded FlyNiki and again flew his own airliners. Lauda (who died in 2019) had become a celebrity as a race driver for Ferrari and stayed close to the Italian car manufacturer after. That’s something he shared with Martin Gauss – who is known in industry circles for his passion for the Italian automobile brand and its iconic designs.