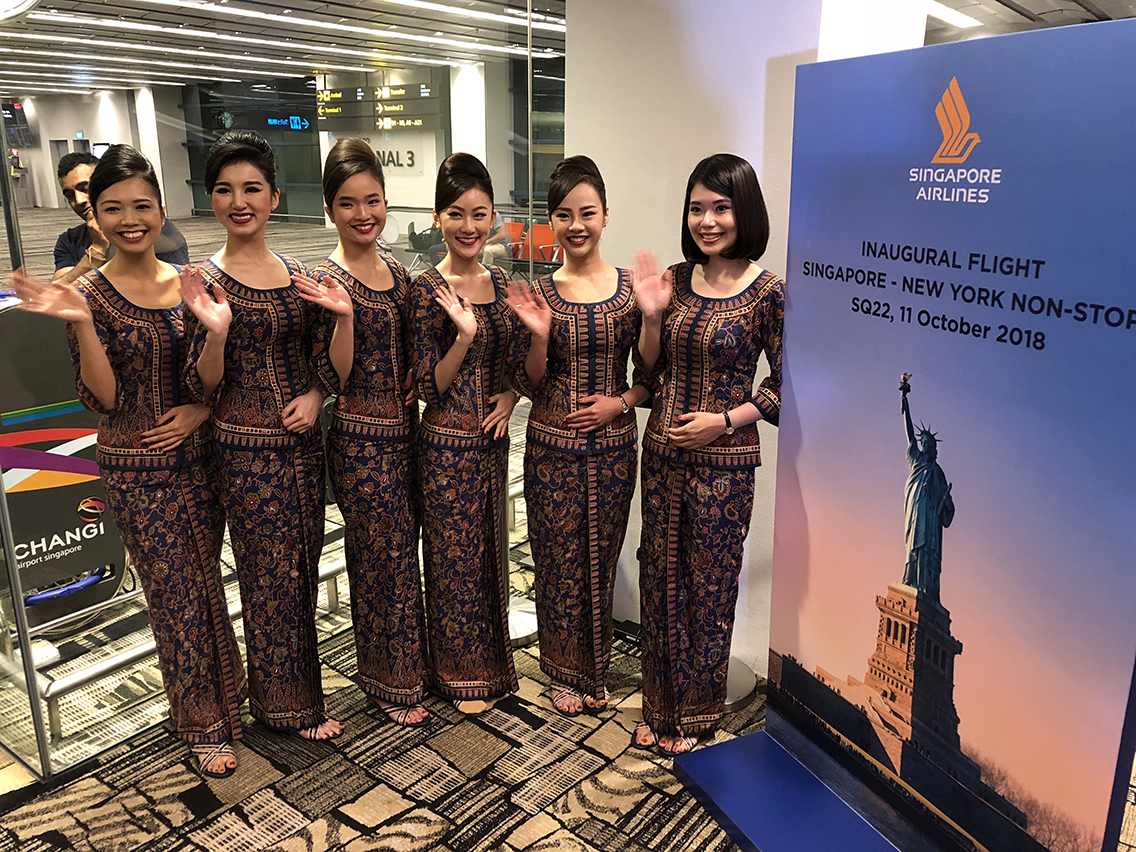 Singapore Airlines’ relaunch of the Singapore to New York nonstop, the world’s longest flight, was an outstanding success by any measure and passengers dusted off the 17 hours 52 minutes as “no big deal”.

Key to its success is the Airbus A350-900ULR, the all-composite twin-engine ultra-long-range jet that burns about 35 percent less fuel than the aircraft it directly replaces for this route the A340-500.

The numbers are impressive. Compared to the A340-500, which the airline used on the route between 2004 and 2013, the A350-900ULR can carry 14 percent more passengers while being 15 percent lighter and its take-off weight – thanks to less fuel required – is 26 percent less!

This week saw Singapore Airlines' relaunch the non-stop Singapore to New York.Join Geoff Thomas on board the A350 for the world’s longest flight by distance.

Posted by Airlineratings.com on Friday, 12 October 2018

But away from the numbers for passengers, the A350 is a dream machine with lower cabin altitude, higher humidity, lower noise and better air conditioning making it a “great way to fly” and helping significantly to reduce the impact of the long non-stop flight.

Now to the flight!

Celebrations started at the Gate Lounge at 9.35pm with passengers entertained with singers reeling off great Broadway hit songs to get everyone in the mood. Not that we need much encouragement as we were making history.

Wine and food were on offer and the atmosphere was charged like a good Singapore thunderstorm that has been rolling through during the day.

Posted by Airlineratings.com on Friday, 12 October 2018

Not long after take-off on the world’s longest flight, a marathon of food and wine started. But this was a bit different being influenced by the partnership with the chefs and nutritionists from Canyon Ranch, one of the leaders in healthy living and wellness. But there were also the traditional favorites from SIA’s own meal selections and creations by its International Culinary Panel of chefs.

Our Pacific track took us across the South China Sea, abeam Vietnam, Hong Kong and Taiwan and onwards toward Japan.

The supper service was seamless and I chose the snapper which was cooked to perfection.

Cabin mood lighting was soothing and quickly the passengers settled down for slumber.

The A350 was very stable and the flight very smooth and the occasional bump was handled noticed.

The business class seating on this aircraft is not the latest that was unveiled early this year for the A380 but nonetheless was very comfortable and still considered state-of-the-art. The airline, however, has made modifications for this ULR aircraft adding more padding to the “sleep mode” of the seat.

After Japan, the sun rose and our aircraft tracked toward Alaska.

A few hours later a full lunch was on offer.

Singapore Airlines’ described this as an “Epicurean Journey” and gives passengers a small book of selections to prove the point.

The starter was the famous Singapore Chicken and Beef Satay and it hasn’t lost any of its shine. This signature dish was followed by a Salad of Crab.

For the main course, there were 6 selections and I opted for the Beef Cheek in Red Wine Sauce. It was perfectly cooked.

Of course, you could have selected, in the days before departure, options from the Book the Cook which appear to be almost endless.

Night fell over Fairbanks and many returned to slumber or a good movie.

For this flight, Singapore Airlines has added another 200 hours of content. For me it as back to my iPad and a catch up on some favorite TV series.

Passengers can also stay in touch with high-speed in-flight WiFi service. The A350 is equipped with Panasonic Avionics’ new satellite modem that operates with its third generation satellite network. The service is capable of delivering higher-speed Internet to passengers.

Before we knew it, Captain Leong was advising us that Newark was only 48 minutes away. Where have all those 17 hours gone? The world’s longest flight was shorter than we all thought!

All in all, a wonderful world’s longest flight and a big tick for Singapore Airlines and aviation.

Geoffrey Thomas was a guest of Singapore Airlines