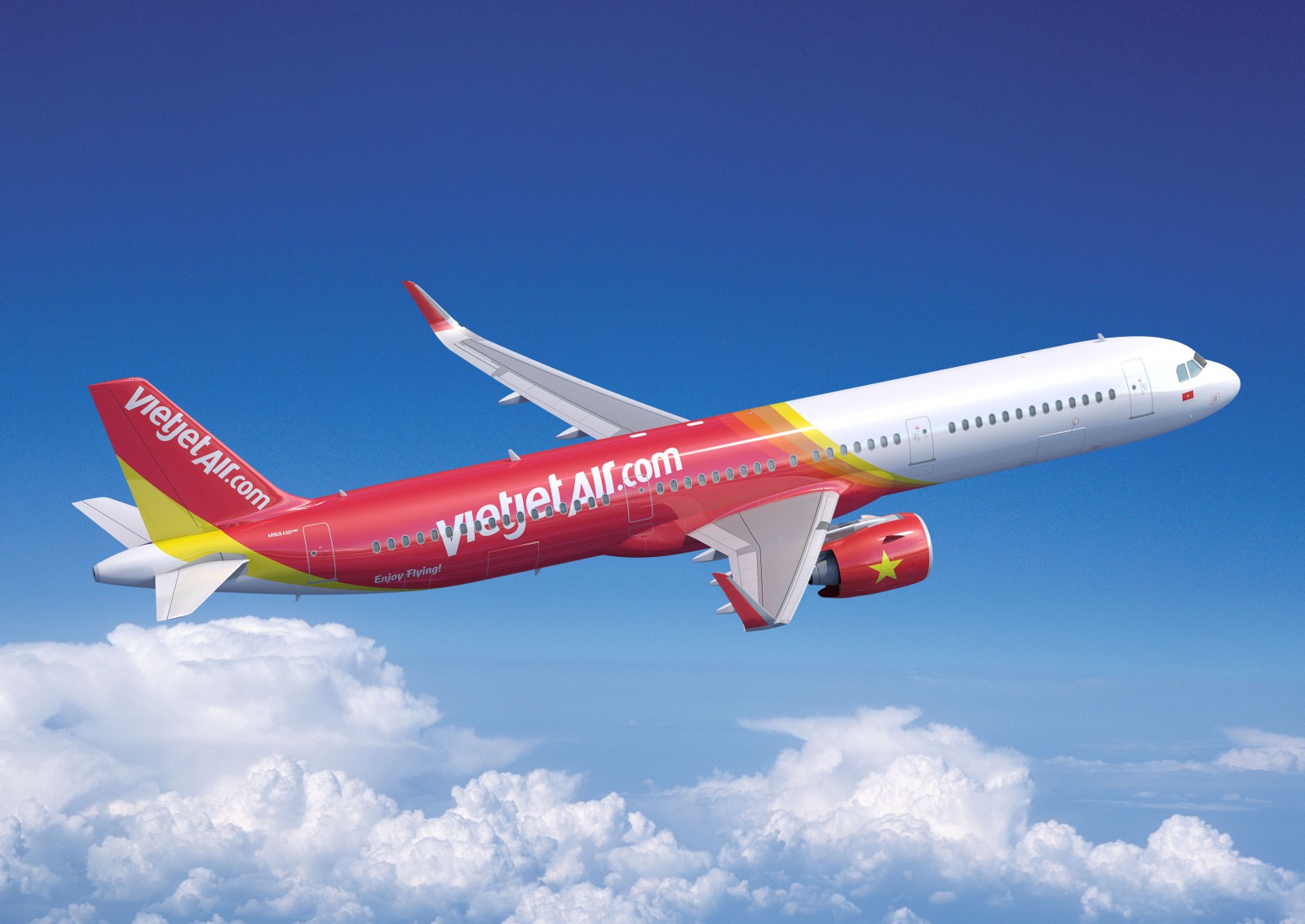 It’s no secret that the global aviation industry has had an incredibly challenging year in 2020. As a result of the COVID-19 pandemic, airlines all over the world are facing financial difficulties. Many have to make drastic cuts to survive and some are sadly no longer flying.

However, the Vietnam-based carrier, Vietjet, has managed to fly in the face of this dispiriting trend. To weather the initial storm caused by the pandemic, the airline has shown great agility by adjusting its business focus.

Vietjet flight crew about to board a flight before the pandemic

Aware that border restrictions would lead to a sharp decline in passenger transportation, Vietjet was one of the first LCCs in Asia to shift towards air cargo. As far back as March, the airline began to meet surging demand for freight transportation. It is also the first airline in Vietnam to receive approval to deploy cargo operations in the passenger cabin (CIPC).

Since then thousands of cargo flights delivering essential goods, garments, and medical equipment have been operated by Vietjet. Cargo volumes between April and August 2020 grew by 23 percent to 19,872 tons.

Cargo being unloaded from a Vietjet flight in 2020

To further enhance the airline’s cargo business, Vietjet recently teamed up with UPS, a global leader in logistics, to leverage both parties’ global and regional networks. The collaboration provides Vietjet with access to UPS’s extensive global network via UPS’s “browntails” while UPS will be able to tap on Vietjet’s extensive reach within Vietnam, Thailand, and all over Asia region, to serve businesses in more areas and at quicker speeds.

For the first time on September 26, 2020, UPS and Vietjet successfully operated a cargo flight from Hanoi to the US via Incheon (South Korea). The service has been operated with one service per week since then. The transported cargo, including garment products, seafood, medical commodities, and other general cargo, are collected from all Vietjet’s hubs in Vietnam, Thailand, and other Asian destinations to Hanoi.

In the meantime, the new-age carrier has launched a number of new commercial products and services to keep its passengers thirsting for travel amidst a global pandemic. It became the world’s first airline to offer a COVID-19 insurance package, called “Sky Covid Care”, in March that brought passengers peace of mind with medical coverage and numerous benefits when flying in Vietnam. The package instantly caught the attention of the public in Vietnam, encouraging travelers to book flights knowing that they could travel with safety and confidence.

Also, to bolster ticket sales, the airline launched a number of options for ‘All you can fly” passes, which have never existed before in Vietnam. The passes, which were available for both Eco and SkyBoss ticket classes, allow holders to fly on up to nearly 300 flights daily on over 50 routes within Vietnam in a year.

The airline has also diversified its services by unveiling Deluxe, a brand-new ticket fare in addition to the SkyBoss and Eco. Deluxe has been specially created to enhance customers’ all-around flying experiences and comes with Deluxe Flight Care insurance included. All of these new products helped the carrier successfully ramp up revenue at a time when the pandemic has frozen sales for airlines elsewhere in the world.

Back to back domestic and repatriation flights

Thanks to Vietnam’s outstanding, preliminary achievements in controlling the COVID-19 pandemic, Vietjet has been able to play an important role in stimulating tourism and trade within the country’s borders. The airline has operated thousands of fully loaded flights since Vietnam completed its national social distancing at the end of April 2020.

As soon as domestic flights resumed, way ahead of most countries, Vietjet quickly implemented a campaign called “Returning to the sky” to encourage sales. Not only that but the airline inaugurated eight new routes, increasing the domestic flight network to a total of 53 routes. Its domestic network even managed to reach full capacity in September 2020.

During the third quarter of 2020, the LCC operated up to 15,000 safe flights, serving more than 3 million passengers in the domestic market with an on-time performance (OTP) of 91% on average and a technical reliability rate of 99.64 percent.

Meanwhile, in the Land of Smiles, Thai Vietjet, a subsidiary airline of Vietjet, has also thrived through 2020. Despite the global pandemic, it has managed to launch seven new routes in Thailand, doubling its service in the country to 14 by December 2020. The airline expects to operate a fleet of 15 aircraft by the end of this year.

Besides the resumption and expansion of its domestic flight network, Vietjet as a group has also taken a lead in cooperating with local authorities to repatriate stranded citizens back to Vietnam and Thailand. Over 10,000 people have been brought home from Asian countries on Vietjet flights since March 2020. These international operations have been a real highlight for Vietjet.

In order to ensure community health and prevent the spread of the pandemic, Vietjet has toughened its disease prevention efforts and strictly monitored the screening of passengers and cabin crews before and after each flight as well as following compulsory medical procedures. All Vietjet flights meet the highest safety standards of the authorities, the World Health Organization (WHO) and the International Air Transport Association (IATA) to guarantee the well being of passengers, cabin crews, and the whole community.

Vietjet has reached many milestones and made many achievements in 2020. In particular, the airline was honored “Vietnam Brand, Global Impact” at the PR Newswire Awards 2020, which are selected by a judging panel composed of international experts and leaders in communications and public relations.

Speaking at the award ceremony, Vietjet’s Vice President Nguyen Thi Thuy Binh said: “We are proud that Vietjet, a Vietnamese brand operating in the aviation industry, has been favored by millions of customers and partners and has truly become an inspiration for young generations around the world.”

Amid the pandemic, Vietjet was also honored at the HR Asia Awards 2020, the most prestigious annual award for human resources at a regional level. The award honors leading enterprises offering attractive welfare policies, an ideal work environment, and regular training and development programs.

The award ceremony for the Top 50 “Best Companies to Work for in Asia 2020” –organized by Asia’s leading human resource magazine, HR Asia Magazine – took place in Ho Chi Minh City. The event honored all of the leading enterprises with the best working environment throughout Asia, such as Vietjet, Techcombank, Coca Cola, and others.

Amid a bleak year for aviation, during which tens of thousands of airline staff have been made redundant around the world, Vietjet and Thai Vietjet, however, have been able to secure jobs for employees. In fact, Thai Vietjet recruited more manpower to continue expanding its flight network in Thailand and overseas. The airline aims to increase its manpower from 700 to 1,000 and its fleet to 15 from 11 by the end of 2020.

In December 2020, Thai Vietjet also received global recognition as the ‘Fastest Growing Low-Cost Carrier of the year’ in Thailand by Global Business Outlook Magazine. The award highlights Thai Vietjet’s achievements in fleet and new destination growth. Starting operations for both international and domestic services in late 2016 with only 3 aircraft, the carrier has obtained triple-digit growth since then with 13 aircraft, together with 14 Thai domestic destinations and 17 other international routes operated to Vietnam, Taiwan, and mainland China.

Winning over customers and industry experts

First launched in December 2011, Vietjet became the first private airline in Vietnam to offer domestic and international services. Since then, the airline has grown from strength to strength, continually winning over customers by offering great value, fun promotions and innovative services and operating safe flights on modern aircraft with a fleet of A320s.

The airline has also continually impressed industry experts. In 2018, Vietjet has been awarded by Airline Ratings the highest ranking for safety in global aviation with 7-stars. It is also now a fully-fledged member of the International Air Transport Association (IATA) with the IATA Operational Safety Audit (IOSA) certificate and technical reliability rate standing of 99.64 percent.

The airline has also been listed as one of the world’s 50 best airlines for healthy financing and operations by Airfinance Journal in 2018 and 2019 and been named ‘Best Low-Cost Carrier’ by the likes of Skytrax, CAPA, Airline Ratings, and many others.

“Vietjet has become an important part of Asia’s way of life bringing affordable fares to many,” says Geoffrey Thomas – Editor-in-chief of AirlineRatings.com, which named the carrier ‘Best Ultra Low-Cost Airline’ for two consecutive years in 2019 and 2020. “The airline has a very modern fleet of Airbus aircraft and operationally is now up there with the very best. That is great news for the traveling public and tourists in the region.”