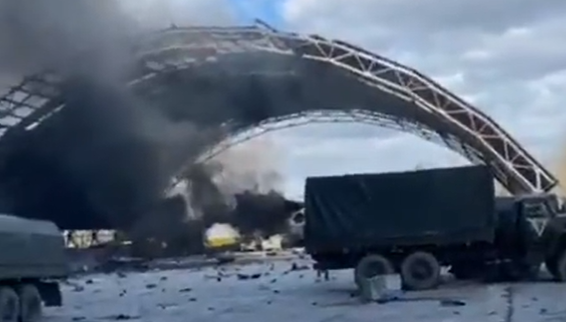 A video has emerged that shows the world’s largest and much-loved AN-225 destroyed by fire in its hangar at Hostomel Airport in Ukraine.

There had been considerable speculation and contradictory accounts surrounding the fate of the AN-225 but the video below confirms its destruction. during the unprovoked attacks from Russian forces.

And sadly here are the pictures.

Earlier drone and satellite images of its damaged hangar showed the tail of the giant jet still intact indicating the whole aircraft may have survived.

Paul Byrne (@ThePlanetaryGuy) superposed a drawing of the aircraft (below) onto what appears to be the jet’s exposed tailplane, seen on an image posted earlier by @CSBiggers

Byrne comments that “although there’s substantial damage to the hangar, most of the airframe is under the undamaged section.”

The Antonov Company has also tweeted “Currently until the AN-225 has been inspected by experts, we cannot report on the technical condition of the aircraft. Stay tuned for a further official announcement.”