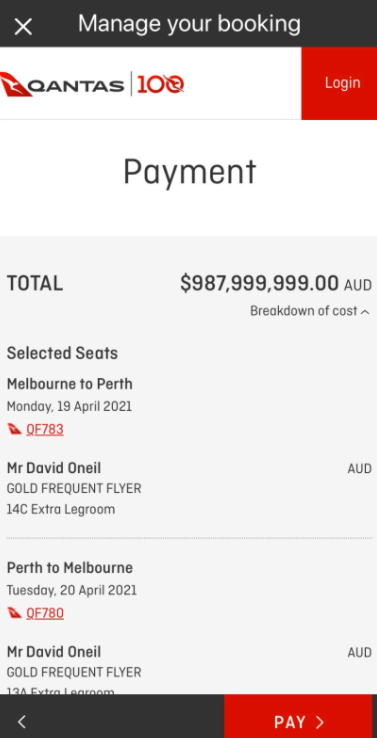 Instead of $70 for more legroom, Qantas has tried to charge an Aussie traveler almost $1 billion for extra legroom.

Australia comedian Dave O’Neil has shared a photo of his flight details for a Melbourne to Perth flight saying on Twitter; “Hey Qantas all I wanted was extra legroom on my flight to Perth, very happy to pay for it but this seems a bit expensive.”

Qantas has responded saying “looks slightly over the normal price”.

That exchange started an avalanche of down-under humor with one lady asking if a meal onboard was included.

Another tweeted: “Imagine if you asked to purchase an additional baggage allowance.”

The airline told 7News.com.au the bill “was a bit of a stretch” and added, “we can confirm the passenger was charged the correct amount of $70 per sector for the extra legroom and we’re investigating what caused the incorrect amount to be displayed.”

Another man tweeted; “You celebrity types. Never want to pay full retail for anything.”

While another said; “Qantas could have rounded it up”

“That’s a lotta legs!” said another.

“Is the airline’s fleet of planes included?” was another comment.

Which got us thinking.