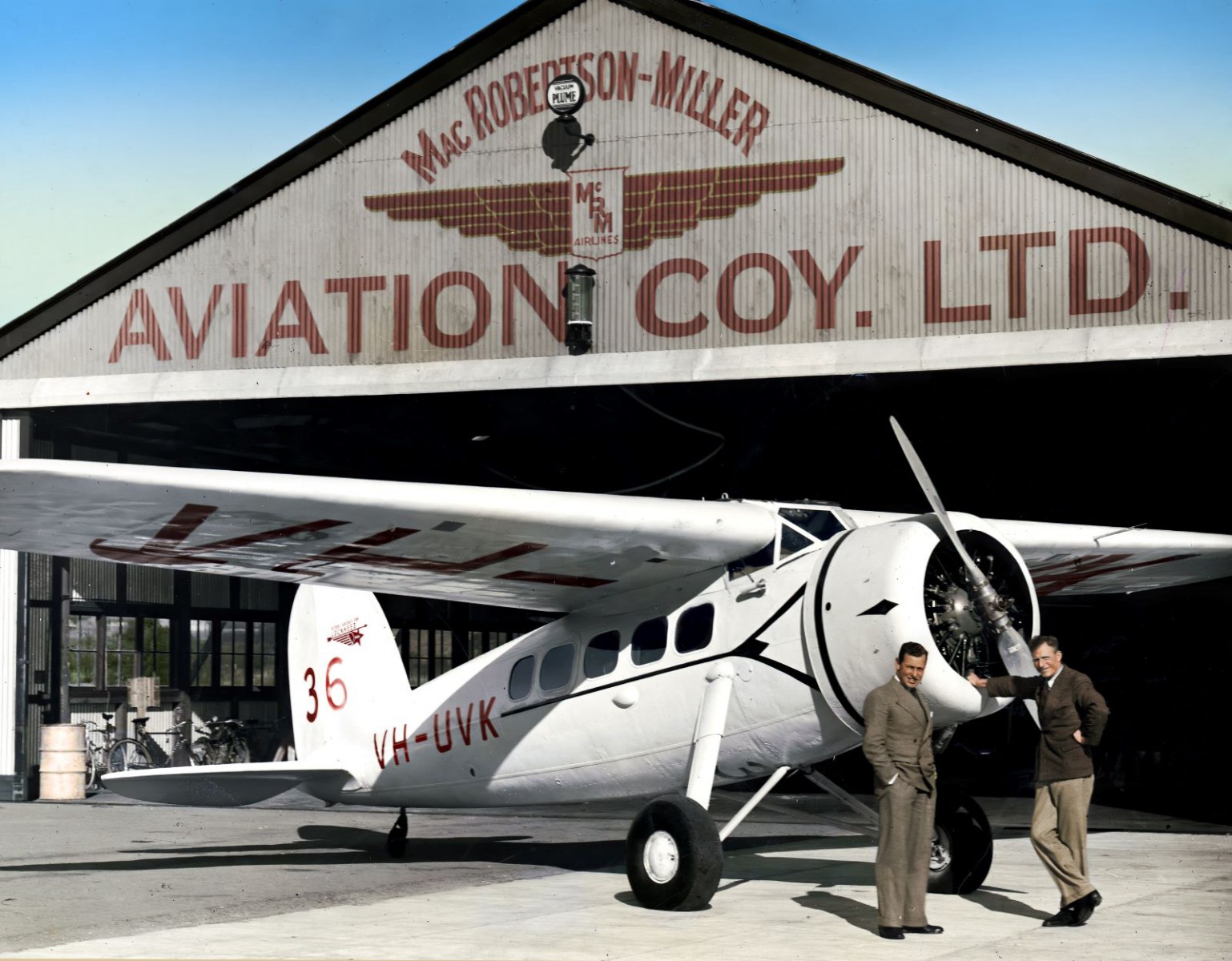 They may be almost 90 years apart but the Lockheed Vega of MacRoberston Miller Airlines (MMA) and the A320 of QantasLink have two things in common – extraordinary performance and the same registration – VH-UVK.

“When we were looking for a new set of registrations for our latest A320s we operate for QantasLink, we were delighted to see that the UV series was available,” Mr Miller said.

“We saw it as a great opportunity to honour WA aviation and the legendary Horrie Miller, who founded MacRoberston Miller Airlines.”

Mr Miller, an aviation tragic and not related to Horrie Miller, added that MMA, later to be absorbed by Ansett, set up the WA air route network we know today.

In 1934 Horrie Miller was attracted by the six-passenger Lockheed Vega, designed by aeronautical genesis Jack Northrop and Gerald Vultee, with its speed of 266km/hr and range of 1,167 km – almost double that of the airline’s ten-passenger de Havilland Dragons.

While stunning in its day the Vega’s capabilities pale beside the A320 which cruises at 870km/hr, flies 6,000km with up to 180 passengers.

The A320 is used by both Qantaslink and Virgin Australia, mostly to support the booming resource industry’s FIFO requirements.

The Vega had smashed records across the globe and arrived in Perth in 1935. Its first commercial service was on October 13, 1935, when she departed Maylands at 5.15 am bound for Adelaide with two passengers under the command of the famous Capt. Jimmy Woods who would later form his own airline flying holidaymakers to Rottnest.

Capt. Woods reached Parafield in Adelaide after just 7 hours 55 minutes with stops at Kalgoorlie, Forrest and Ceduna for fuel.

That was an impressive performance compared to the two full days flying for West Australian Airways DH.89 Rapides which required a night stop at Forrest on the same route.

According to aviation historian Geoff Goodall, Capt. Miller then settled the Vega down into her specialised role for the airline of charter work and fast communication flights between his MMA bases in Perth and across the network.

The Vega ranged far and wide across WA and in 1938 set another record flying from Perth to Darwin in just 14 hours 20 minutes with stops at Geraldton, Port Hedland, Broome, Noonkanbah, Fitzroy Crossing and Wyndham.

When WWII broke out the Vega was transferred to the RAAF but after hostilities ended, the regulator of the day the Department of Civil Aviation insisted that she be broken up due to alleged instability problems, an issue hotly contested by Capt. Woods who wanted to acquire her for his planned Perth to Rottnest airline.

Capt. Woods had to be satisfied with two Avro Ansons which plied that air route from 1948 until 1962.

Fast forward to 2021 and VH-UVK is the 8th A320 to wear QantasLink colours and she joins a Perth-based fleet of 17 100-seat Fokker 100s to support the fast-growing resource industry.

Network Aviation Chief Pilot Rick Heaton says the Airbus A320 is a remarkable aircraft and the perfect solution for WA’s “demanding environment of long distances and very hot temperatures.”

The Airbus A320 is now the world’s most popular commercial jet with over 15,499 sales since the first entered service in 1987.

The design has been constantly upgraded and Qantas has over 100 of the latest version, the A320neo, on order for the group.

We saw it as a great opportunity to honour WA aviation and the legendary Horrie Miller, who foundered MacRoberston Miller Airlines.