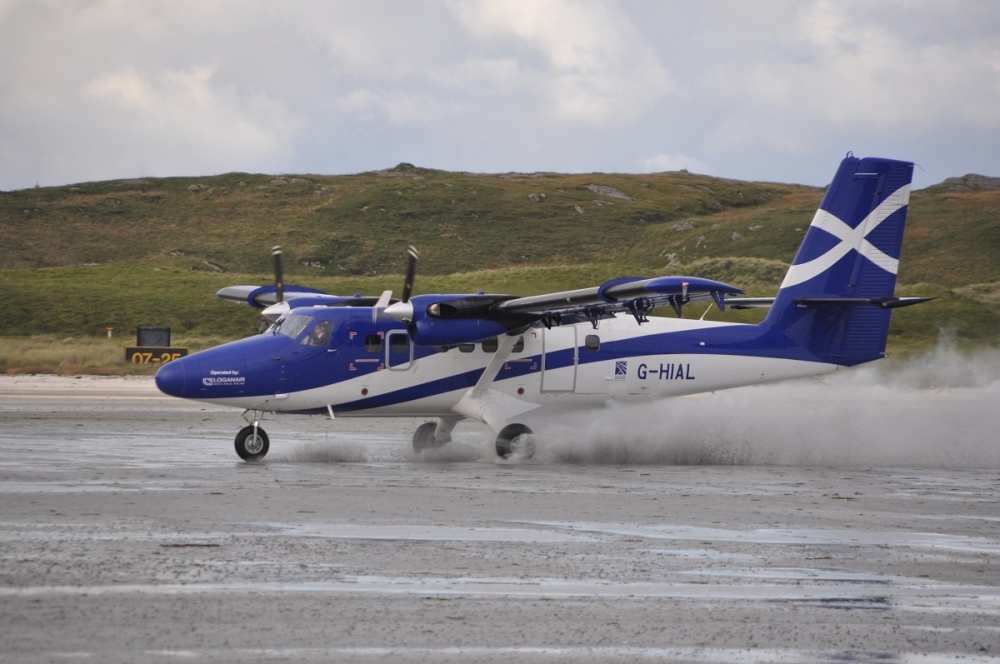 It’s a unique airport where runway debris has included a two-metre shark and a dead dolphin, not to mention regular piles of seaweed.

The Scottish island of Barra, in the Outer Hebrides islands, boasts the only airport in the world where scheduled airline flights land on the beach — and it’s still going strong.

Flights to the Atlantic Ocean outpost started in 1936 — the same year a modest passenger terminal opened adjacent to the Gatwick racecourse, south of London.

The island could otherwise only to be reached by a weather-prone ferry from Oban, 90 miles away.

The British Air Ministry granted the official airfield licence to An Tràigh Mhòr, meaning “big beach “, on August 7, 1936.  An eight-seater Dragon Rapide, which had to stop several times on the journey to Glasgow, was used on the island flights and successfully used the beach as an airfield during low tide.

Gatwick would evolve over the next eight decades to handle more than 40 million passengers a year and become a major global airport known to passengers around the world.

Barra’s unique beach airport, which has also endured for 80 years and even boasts three runways, has achieved fame in its own way.  People come from as far away as Australia to experience the beach landing and in 2016, its 80th anniversary year, it handled almost 11,000 passengers on scheduled flights.

AIrlineRatings took Flight BE6581 from Glasgow to Barra, a service operated by Loganair under a soon-ending code share agreement with Flybe. The company utilises a new blue-and-white Viking DH-6-400 Twin Otter in the Scottish national colours.

After an hour above the Scottish Highlands and over white crested waves on the Atlantic, pilot Annag Bagley lowers the nose of the Twin Otter and puts it into a left turn.

The 35-year-old was born and raised in Barra. About 1,200 people live on the island, which was strategically important in former times because it offered the first sheltered harbour north of Ireland.

As we approach the island, those who have never taken the flight can be forgiven for nervously asking: “Where the hell are we going to land?”.

Through the cockpit windows, one can see only water puddles and tidal flats ahead before the arrival of the moment many come to  the island to experience: the world’s only scheduled flight landing on a beach.

With a short hop, the aircraft touches down on the sand, rattling a bit as the water-formed riffles on the beach are felt inside the cabin.

Despite it being low tide, there is still a bit of water on the “runway” – even though nothing resembling a runway can be seen.

Water splashes up waist-high from both wheels of the main gear as, like an all-terrain vehicle, the aircraft ploughs over the beach and slows down quickly.  Then Bagley and her first officer park the aircraft on dry sand next to the terminal.

The pilots walk the few metres over mussel remains and dried seaweed to the building.

“I have watched the airplanes here as a kid; that I fly them myself now was always a dream, ‘’ explains Bagley “These flights are a lifeline for the island.”

When she is on duty, Bagley comes here once a day mostly, spending barely 30 minutes on the ground before taking off on the return flight.

“Our flight schedule naturally takes the tide into account, as one can’t land during high tide,’’ she says. “That’s why our two daily flights to Glasgow are taking place within two hours of each other.”

The small café in the terminal is packed. On the walls are historic photos of the world’s most unusual airport.

“There was never an accident, but sometimes an aircraft gets stuck in the loose sand,’’ says the airport’s manager Michael Galbraith.

Exactly 10,658 passengers were handled at the airport in 2015 spread over 947 scheduled flights.

Barra’s three sand runways are invisible as such even from the tower and are only designated by wooden markers at each end.

“We have to regularly smoothen the surface of the runways with tractors and remove sandbanks, otherwise it gets too uneven for the aircraft,’’ notes Galbraith.

Staff inspect the runways twice daily, an important function because waves from the Atlantic Ocean regularly flood airport and often carry objects that definitely shouldn’t be lying on a runway.

Accumulations of seaweed or algae must be removed as does driftwood or plastic packaging.

“You have to be prepared for anything here”, says the airport manager, who can’t be surprised easily anymore in Barra. “Recently we found a two-meter-long dead shark on a runway, and there once was also a deceased dolphin on another.”

Preventing encounters of aircraft and marine animals is one of the many tasks of Michael Galbraith and his team, there is certainly little room for boredom.

“On paper, it looks like the best job in the world, two flights a day, a beautifully located airport in an enticing landscape, everybody here is fully relaxed”, laughs the Scot. “In reality, however, we have a lot to do, real multi-tasking.  I am sitting in the tower, (I) work at the airport fire service, look after security and the terminal building.”