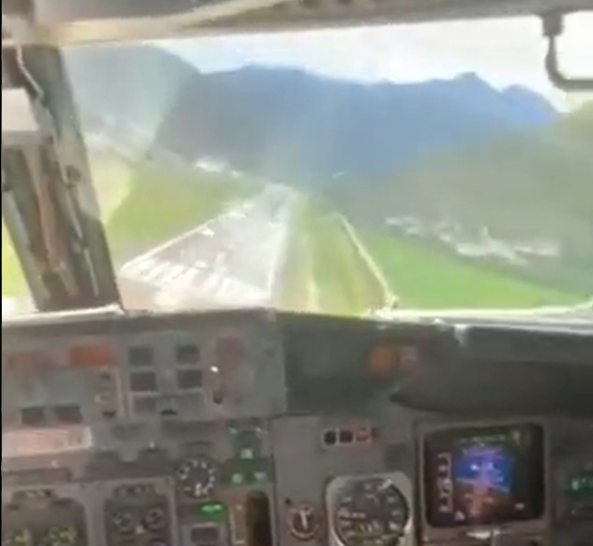 An incredible video of a perilous landing by an Indonesian airline has been posted to YouTube.

The aircraft was reportedly a Boeing 737-300 registered PK-YGW and owned by Tri M.G. Asian Airlines, a charter cargo operator.

According to the Aviation Herald website, the 737-300 freighter, was performing flight GM-515 from Kolkata (India) to Paro (Bhutan), and “was on approach to Paro’s runway 33 when the crew received a “BANK ANGLE” warning as well as a GPWS “Sink Rate! Pull Up!” warning but continued the approach resulting in a hard touch down”.

According to UNICEF, the site said, the aircraft was carrying Moderna vaccines to Bhutan that were donated to Bhutan within the COVAX initiative.

It said the aircraft remained on the ground in Paro for about 16 hours, then departed for the next sector to Bangkok (Thailand).

Watch carefully and you can see one of the pilots – a captain from his four stripes – in the right-hand seat seemingly videoing the landing with his iPhone. It’s at the very end and he has the phone in his right hand. Also, at about the same time, you can see a GoPro attached to the window.

This video was taken by someone sitting in the jump seat.

The pilots, who should have performed a go-around.

Anyone know the runway? Indonesian registered aircraft but I don’t recognise it 🤔 pic.twitter.com/42OQracYRl

“Tri MG Airlines is a Schedule Cargo Airline operator approved by the Director-General Civil Aviation Authority of Indonesia “DGCA”. The airline has been in operations since Y2003 and is based in Halim Airport Perdana Kusuma, Jakarta, Indonesia. It has outfits in several Indonesian States and flies to various sectors within Indonesia.