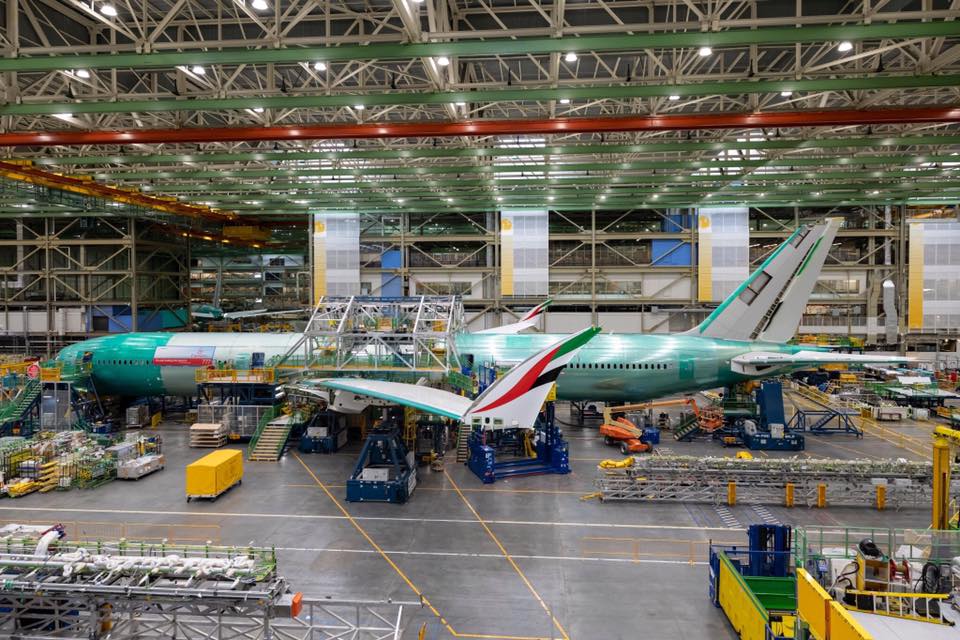 Emirates first 777Xs are strutting their stuff at Boeing’s Everett factory. One has been rolled out onto the flight line showing off her folding wingtips and the other is just behind.

Next stop is the paint shop.

The Emirates 777X shown below is the 7th to be built and delivery is expected to be made in January 2021.

However, Boeing has been advised by General Electric that delivery of new engines for the aircraft has been delayed till early next year.

It was understood that the new engines would be delivered later this year.

The GE engines have been impacted by durability issues and according to Aviation Week’s Guy Norris “an anomaly was detected in the forward part of the 11-stage high-pressure compressor on a GE9X that was undergoing one of the final batches of certification tests.”

“It’s a mechanical issue and nothing to do with the overall performance of the engine or the way it is set up. It is not an aerodynamic issue whatsoever,” GE Aviation GE9X General Manager Ted Ingling told Norris.

In an earnings call with analysts, Boeing CEO Dennis Muilenburg said the engine remained the “pacing item” as the aircraft moved towards first flight.

“As we previously mentioned, GE, our engine supplier is working through some challenges with the engine that are putting risk on the overall test schedule.

“Based on GE’s latest assessment on what it will take to address these challenges, we are currently projecting that first flight will occur in early 2020 rather than in 2019 as we have previously mentioned.

“This scheduled flight is obviously disappointing given how well the aircraft has been performing in preflight tests and that we are on track on non-engine activities.”

Muilenburg said the first two flight test aircraft were performing well in preflight testing, with the intermediate gauntlet and initial taxi tests completed during the quarter.