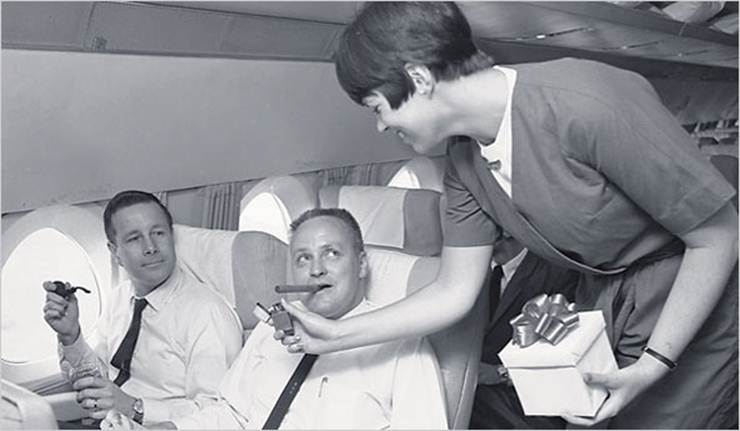 In the hip late 1950s and 1960s and dawn of the Kennedy era in the U. S., what better way to show the world what America was all about than having airline service for men only!

It started with United’s DC-6Bs and the flights would depart New York and Chicago at 5pm every week day and took 3 hours 15 minutes.

It was so popular it was extended to mornings at 9am.

Then United swapped the DC-6s for the French Sud-Est SE. 210 Caravelle and it was almost amusing to seen the conga line of nattily dressed businessmen carrying leather briefcases and wearing grey flannel suits with white button-down shirts and skinny black ties walking out to the rear stairs of the Caravelle.

Yes, as politically incorrect as that may seem today, United’s famous “Men Only” executive service was perceived as a special perk for successful businessmen heading off to, or returning home from important business meetings in a day-and-age well before women airline captains, astronauts, and fighter pilots, not to mention video conferencing.

In another seemingly astonishing move, cigars were not only permitted on these flights, but were eagerly provided to passengers by the stewardesses themselves – the only two women on the aircraft. With its four-abreast seating and large triangular windows, the sleek 64-seat jetliner was an instant hit with passengers and United’s “New York Executive” and “Chicago Executive” men-only flights became an undeniable success with business travelers.

These flights continued until January 1970 when the progressive “women’s liberation” movement suddenly became a force to be reckoned with. The newly formed National Organization for Women took legal action against United, filing a highly publicized lawsuit which officially brought the famed service to an end.

Effectively filling the void in aircraft size at the beginning of the commercial jet age, the Caravelle offered short to medium-range service on routes more suited to aging propliners remaining in operation while larger four-engine jets began to command trunk lines and turboprops reigned supreme at medium-size airports.

United’s Caravelles beat the competition on short and medium-range routes until the Boeing 727 and Douglas DC-9 appeared in the mid-1960s, but the airline’s “pure-jet” Caravelles were a familiar sight in the skies over the eastern United States. In tribute to their homeland these elegant-looking aircraft were named for famous cities in France.