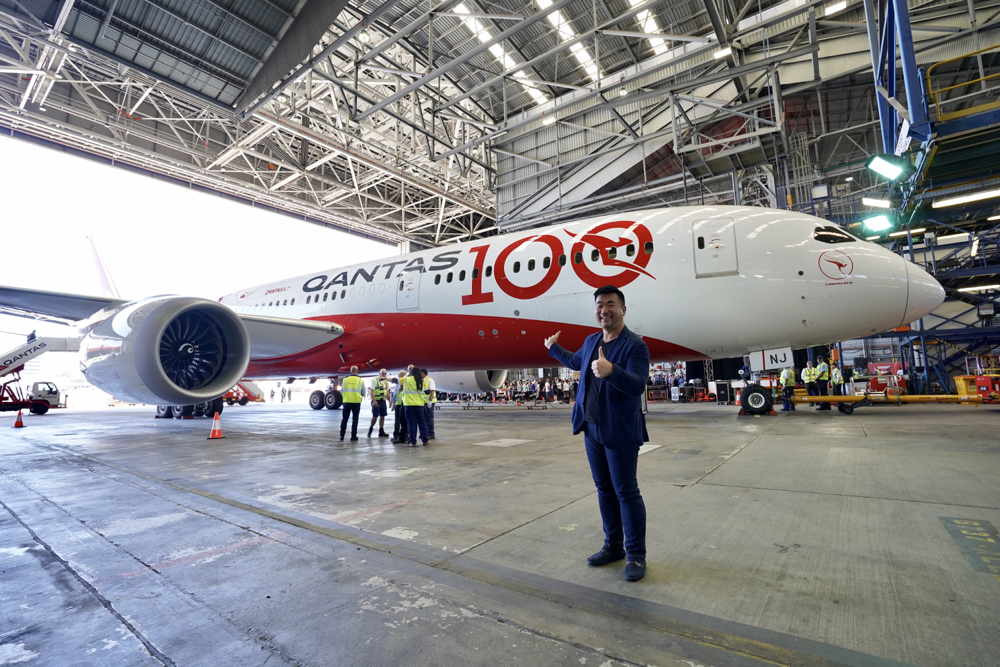 The flight is not a typical passenger flight, it is the Qantas research flight as well as a delivery flight.

The new Boeing 787-9, VH-ZNJ in Qantas special Centenary livery flew in from Boeing factory via Los Angeles to London the day before.

I started my trip leaving the hotel in London City at 3:30 am and arrived at Heathrow Terminal 3 at 4:15 am.

The flight, QF7879 non-stop from London to Sydney is scheduled to depart at 6 am and arrive in Sydney the next day at 12:30 pm.

There is an 11-hour time difference between London and Sydney ensuring passengers on the flight to witness a “double sunrise”.

None of the pilots is from management as the captain explained: “we want to have as close to the real flying experience by our regular pilots.”

Also joined in the cabin are Captain Lisa Norman and Alex Passerini who flew in the day before on the delivery flight from LA to London.

There were 38 passengers, including 6 passengers undertaking research.

Others are invited media, regulatory personnel, VIP and Qantas management.

All of us were seated in the front of the plane in Business Class while our luggage was stored in the rear to balance the plane.

When I asked why there are no passengers seated in the rear of the plane. Qantas explained:

The flight departed at 6:09 am from runway 27L at Heathrow.

About 40 minutes after takeoff, we witnessed the first sunrise on this flight.

The front cabin light was dimmed to allow passengers to acclimatize to Sydney’s evening time clock. I moved to the rear of the plane to record the sunrise.

Led by Professor Corinne Caillaud from Charles Perkins Centre at the University of Sydney, passengers were encouraged to perform a simple set of exercise in the aisle of the Economy.

These exercises include simple walking, stretching in different positions, squatting and lifting heels/tows.

Qantas is working in partnership with the Charles Perkins Centre and CRC for alertness, safety and productivity on board this flight to collect real-time data on passenger and crew inflight health and wellness.

This flight has been designed to test the effect of specially timed food, drink, movement, lightning and sleep on the wellness during the long journey.

“The flight will involve passengers eating supper at breakfast time, with the aim of encouraging them to sleep at 10 am in the morning London time to help avoid light and reset their body clock to Sydney time,” said Prof Caillaud.

And the menu was not your regular inflight menu.

After take-off, we were offered a range of high GI supper options such as chicken broth with macaroni or a steak sandwich, along with a glass of wine and a milk-based dessert.

There were no soft drinks nor spirits loaded on the flight.

Healthier drinks such as Kombucha and coconut water were provided instead.

Qantas also provided every passenger with a refillable water bottle which I think is a great initiative to avoid plastic bottles.

After the supper, passengers including myself went straight to sleep.

At this point, three hours had past into the 19 hours flight.

After a long un-disruptive rest and 13 hours into the flight, I witnessed the second sunrise over Ambon, Indonesia.

Breakfast was served during sunrise.

Passengers were offered a shot of piccolo latte or cold pressed juices.

On today’s flight, we were presented with a flight certificate “Secret Order of the Double Sunrise”

We reached Northern Territories of Australia with just 4 hours remaining. Our fuel load on this flight was 100,800 Kilograms and we consumed about 93,200 kilograms with an extra saving of 1,800 kilograms due to flight plan optimization.

A light lunch was served before landing. The paste with beef ragu was simply delicious.

Our landing was made at 12:28 pm local time in Sydney.

The total flying time was 19 hours and 19 minutes.

The flight landed on Runway 34L and headed straight into Qantas Jetbase hangar.

With the good jetlag strategies, my body clock acclimatized well into Sydney’s time zone at the beginning of the flight so I didn’t feel particularly jet-lagged after arriving.

I see advantages of less body fatigue on a 19 hours non-stop flight over one-stop which usually takes at least 22 -24 hours from London to Sydney.

It remains interesting to see how the “roomier” Economy Class will fare should Project Sunrise go ahead.

ABOUT SAM: Sam Chui is one of the world’s leading aviation and travel bloggers. Every year he travels over 300,000 miles to test and share the experience onboard some of the finest fleets in the sky. Sam has travelled to over 100 countries, flown over 1800 flights and log over 3 million miles around the globe to pursue his passion – aviation and travel.