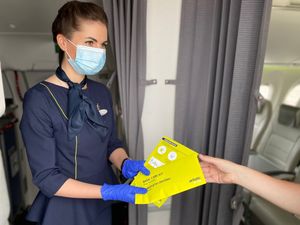 In a major breakthrough in COVID-19 testing the U.S. Food and Drug Administration (FDA) yesterday gave an emergency use authorization to Abbott Laboratories for a 15-minute test that should ease travel bottlenecks and eliminate quarantining.

According to the American Association for the Advancement of Science, the test detects viral proteins, or antigens, that are unique to SARS-CoV-2, the virus that causes COVID-19.

“Abbott says the new assay will cost US$5, and the company intends to produce tens of millions of the tests in September and 50 million in October.”

READ: The rise and rise of Kam Air

By providing near–real-time answers on whether someone is infected, the test could kick start global travel be eliminating the 14-day quarantine requirements.

It is likely that airports and airlines would work together to test passengers before entering the terminal and then test again on arrival.

“It will be administered first by physicians as a diagnostic, but this is a big step towards the development and approvals of similar assays that can eventually be used over the counter as public health tools. I am very excited about this milestone.”

Called BinaxNOW, Abbott’s test uses a credit card–size device that adds a solution to a nasal swab to create a color change to flag the presence of SARS-CoV-2 proteins.

AAAS says that Abbott’s device isn’t the first antigen test for SARS-CoV-2 but “others require specialized equipment to read out results, limiting widespread use.”

Analysts Seeking Alpha said “the good thing is that it’s cheap and it’s fast, allowing travelers to make travel plans with proof of a negative COVID-19 test on hand.

“Previously, there was a group of people that would want to fly but not willing to take the risk of booking a ticket only to not get the proof of a negative test in time. BinaxNOW solves that problem as you could basically book your ticket and get the test on the day you fly and possibly it also could ease quarantine regulations which would open up the travel market again.”

The news of the test sent Boeing shares 5 percent higher, while airlines such as United Airlines and Delta Air Lines jumped between were 5 and 10 percent.