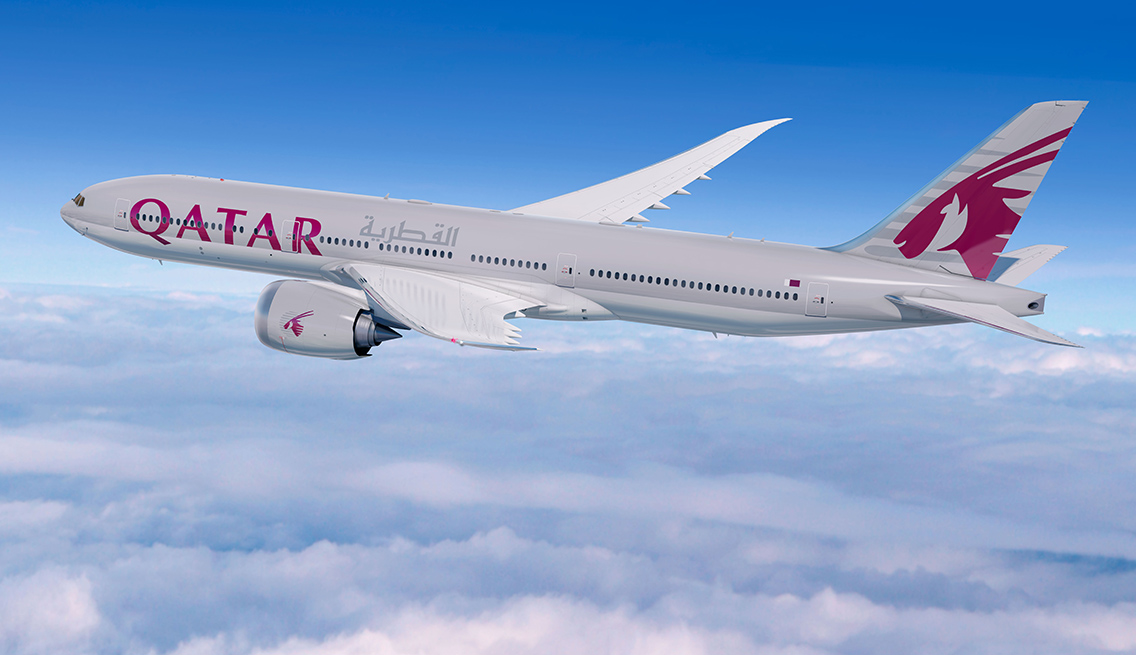 Qatar Airways latest superjet, revealed this month, is called by airline executives an absolute peach and passengers will just love it.

Boeing’s new 777X that has just been unveiled was launched by a group of the world’s leading airlines in 2013.

The reason airlines and passengers will love the 777X is that it combines all the cabin features of the 787, with a new super-efficient engine and wider fuselage than the standard 777.

The GE9X engine is the world’s most fuel-efficient commercial engine and is a key contributor to what makes the 777X the largest and most efficient twin-engine jet, according to Boeing.

Compared to the A380, the 777X will use an incredible 40 percent less fuel per passenger.

The engine’s front fan measures 3.4m in diameter, the largest ever produced for a commercial aircraft, according to GE.

The massive fan is the same width as a 737 fuselage, which can seat six passengers across its width.

To date, Boeing has 340 orders and commitments for the 777X from a range of airlines.

Boeing has taken the 777 fuselage, for which has over 20 years’ experience and has widened it by 4 inches by re-sculpturing the fuselage ribs.

This has been possible because the 777 was over-engineered when it was originally conceived and is arguably one of the strongest aircraft fuselages ever built by Boeing.

That strength has also enabled Boeing to increase the window size and it has moved the windows higher to enable passengers seated in the middle seats to see out.

Another benefit of the fuselage strength is Boeing is able to lower the cabin altitude to close to that of the 787 eliminating one if the contributors to “jet lag”. It has also been able to increase the humidity to reduce dehydration.

The 777X will be the flagship for Qatar Airways and will feature the airline’s award-winning Business Class Qsuites.

They are more a revolution than evolution because business class turns into first class and redefines expectations of business travelers.

On one hand, passengers get a private suite but at the same, there is the flexibility to turn the center suites into a family space with “paired rear and forward-facing suites” which take cabin innovation to an entirely new level.

The interior is designed with the airline’s signature colors of burgundy and grey, enhanced with elegant and warm rose gold detailing which drip opulence and class.

The main event is the sliding door, although there is plenty of privacy with it open.

Qatar Airways is understandably keeping its other 777X plans a closely guarded secret but observers suggest that it will be the showcase for the airline’s latest passenger innovations.

The 777X’s GE9X engine is not only more fuel efficient but much quieter than current engines of the same class which is great for passengers and airport neighbors alike.