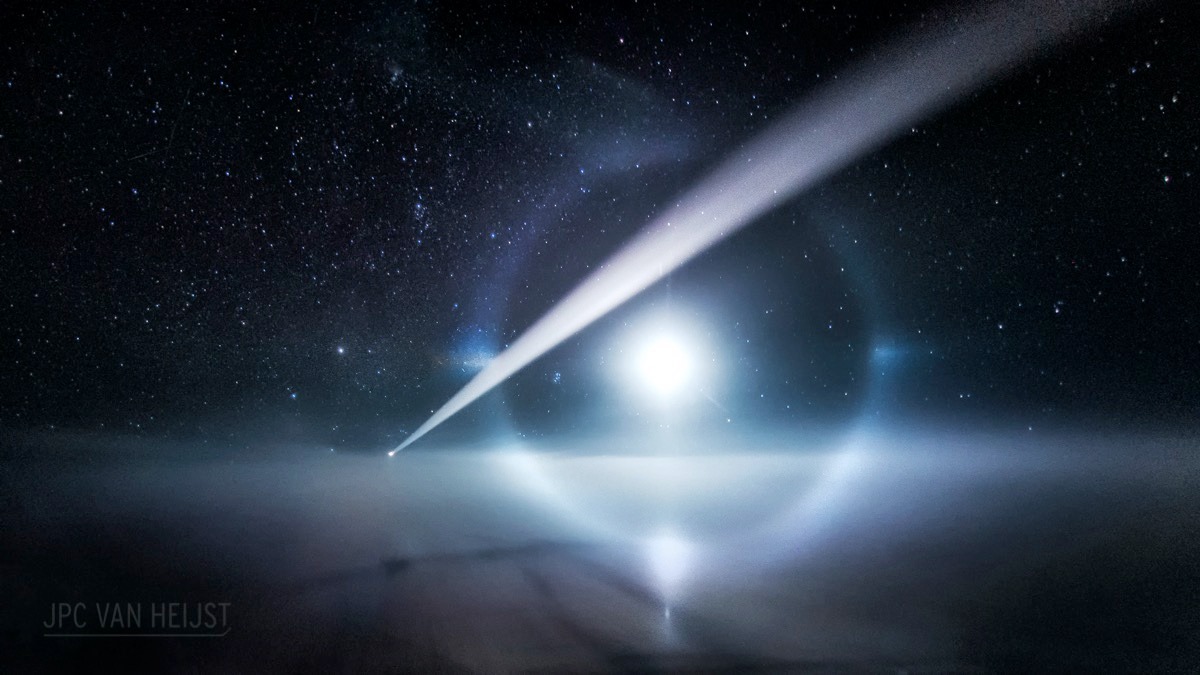 The Moon, a contrail and a 747 create an amazing photo taken by another 747 pilot Christiaan van Heijst.

Chasing the illuminated contrail of another 747 Freighter halfway between Japan and California. The surface of the Pacific is hidden from sight by a thick layer of clouds for now, but the radiant moon is able to cast some shadows and depth in the world outside my windows. This time she is accompanied by a bright halo with parhelia and a rare lower tangent arc, formed by a thin layer of ice crystals in the upper atmosphere. According to superstition and folklore a premonition of bad weather.

Covering nearly one-third of the planet, the Pacific Ocean is ridiculously vast, deep and devoid of human presence.

A few ships perhaps. A submarine or two hidden below the surface, some cargo planes drawing contrails. Lots of sharks as well, I guess.

I often look down and gaze at that dark blue surface. The same body of water without apparent change for over ten hours straight. Ten thousand kilometres of absolutely nothing but an alien abyss. I catch myself checking the engine instruments and re-running my fuel calculations more often than needed. This is not a region where I want to put my life vest to the test.

Far above, another type of boundless depth is laid out. A possibly infinite void, filled with trillions of ancient stars, galaxies, and worlds. Heaven knows what is happening out there, maybe we don’t even want to know. Blissfully unaware like a curious toddler oblivious of the perils and world beyond his comfortable crib.

And yet… it is so alluring. Seductive. Adventurous.

My longing for answers is stronger than the fear of failure or the regret of not having tried.
Let’s see where we are going in the next couple of decades.

Humanity has developed by overcoming the impossible and raising the bar even higher.
Cross the largest ocean, climb the highest mountain and reaching for the stars. Within one generation we’ve learned to master flight and walk on the moon, mankind’s proudest achievement. Nothing is impossible.

Or to quote Antoine de Saint Exupery: “If you want to build a ship, don’t drum up people to collect wood and don’t assign them tasks and work, but rather make them long for the endless immensity of the sea.

Christiaan is one of the world’s leading aviation photographers and more of his work and more close encounter (s) from his 747 can be found here.