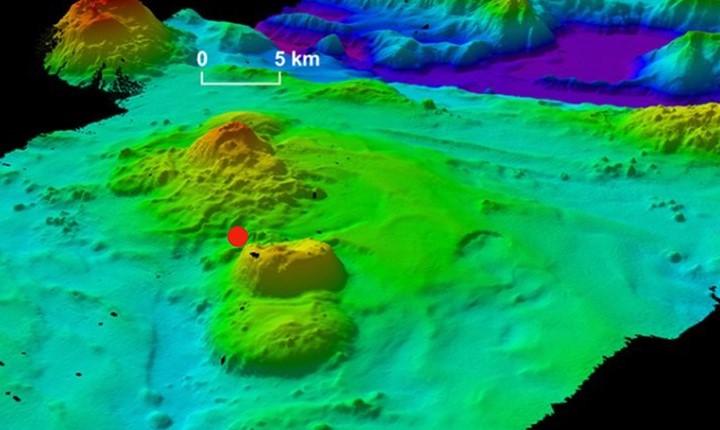 Mr. Godfrey (below) has spent the last nine months using his revolutionary technology on a series of “blind” flights that were not recorded on the usual tracking systems.

In each case, he was able to track the flight accurately in trials adjudicated by AirlineRatings.com/The West Australian and a former Qantas 747 captain.

Those interrogations built a model called the seven arcs, for the six times the satellite contacted MH370 and the seventh when the aircraft initiated the contact with the Boeing 777 to be located on a near the last satellite contact.

The crash point – about a minute later – says Mr. Godfrey is around 11km to the East of the “7th Arc”, which is at the foot of Broken Ridge.

Mr. Godfrey said this location was “not in the original Australian Transport Safety Bureau search area as defined in 2015.

“It is however at the northern end of the extended 120,000 km2 search area as defined in 2016. The area was searched by the survey ships Fugro Equator and Fugro Supporter.

Mr Godfrey notes critically that when the US Ocean Infinity searched in 2018 it was asked not to look in the area already searched by Fugro, and they went all around the area and missed MH370 by 28km.

The tracking done by Mr Godfrey appears to confirm that the aircraft was being controlled by the pilot 53-year-old Captain Zaharie Ahmad Shah.

“It is very clear to me this was very well planned but clearly there was lots going through the captain’s mind with a series of changes.

“There was a holding pattern south of Indonesia, then the aircraft headed for Geraldton in WA, then changed course to the end point from his flight simulator program.”

The tracking shows that Captain Zaharie was preparing for a water ditching but ran out of fuel forcing him to dive the 777 into the ocean, suggests Mr. Godfrey.

While the wind powered backup generator (Ram Air Turbine) deployed after the fuel ran out, it can power electric systems and give the pilot basic controls but it cannot power the flaps, which would be needed for a controlled ditching.

Mr. Godfrey praises the work of both wreck hunter Blaine Gibson and Professor Charitha Pattiaratchi in the search for MH370.

“Thanks to the efforts of Blaine Gibson (below) and many others, 33 debris items have been recovered and many have been proven to have originated from MH370 or a Boeing 777 of similar specification as 9M-MRO.

“Professor Pattiaratchi has conducted a drift analysis and concludes that around 32°S/33°S near the 7th Arc is the most likely crash location. The WSPRnet analysis aligns with his findings,” Mr. Godfrey said.

Commenting on the new location Mr Blaine Gibson said; “I’m a wreck hunter, not a rocket scientist so my judgement is limited to debris and drift analysis. Richard Godfrey’s suggested crash location and search recommendation fits within the southern edge of the drift analysis that led me to half the recovered pieces of the plane.”

The estimated location also aligns with the Inmarsat satellite data, the aircraft’s performance and engineering data, the en-route weather, and the 33 debris items found.

“Taken together all this data supports an overwhelming case for a renewed search in the prime crash location of 33.177°S 95.300°E.,” Mr. Godfrey said.

Mr. Godfrey is now preparing a detailed report for critical analysis for a potential new search for MH370.

It is also expected that the original underwater scanning data for MH370, conducted by Fugro, will be re-examined by the Australian Transport Safety Bureau, in the area of the new location.