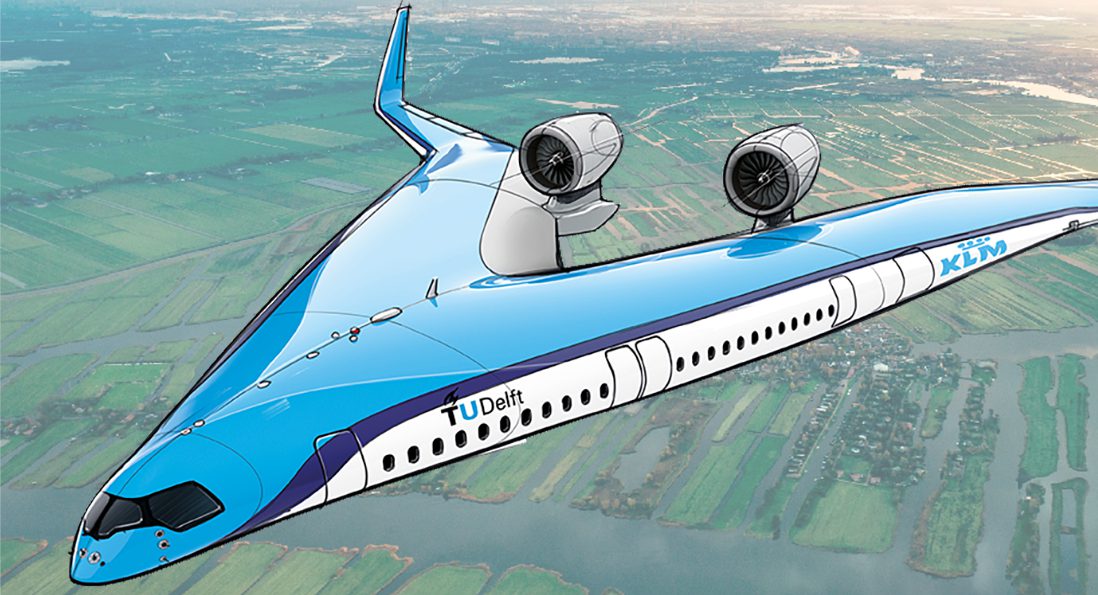 The possible future of travel, the Flying “V”, has taken flight in the form of a scale model.

First revealed in 2014 the Flying V is a co-operation between the Technical University of Delft, Airbus and KLM to help define the way we will fly in a few decades.

KLM presented its sponsorship during its 100th-anniversary celebration in 2019 and as part of its “Fly Responsibly” sustainability campaign which kicked off then.

While the airline was accused of green-washing and exploiting this aircraft project for PR purposes, CEO Pieter Elbers kept his course. “There is no change in our commitment to ‘Fly Responsibly’. Corona will pass, and we feel that we should come out of the crisis even stronger rather than weaker,” he said.

READ: Qatar Airways soars with half the network restored.

SUBSCRIBE to The Back Story to get the real story.

And one element of that is clearly pushing aviation to new boundaries. “We will not be building aircraft, we are operating aircraft, but every contribution we can make to make aviation more sustainable is of crucial importance to us, that’s why we do this,” Elbers said at the presentation of footage of the first successful take-off and landing of the Flying V model, which had been on display in Amsterdam last year.

The model aircraft, with a wingspan of about three meters and weighing 22 kilos, flew in July for five minutes during tests at a German military airfield.

The Flying V is a variation of earlier Blended Wing Body (BWB) concepts, on which research has also been done before by Boeing and several universities. The University of Applied Sciences in Hamburg, Germany, had a BWB scale model flying already back in 2001.

The current Flying V concept was the result of a student project within Airbus Hamburg in 2014, which has since been refined. On purpose, the researchers wanted to keep it as simple as possible, as the full-scale Flying V is supposed to be a bit smaller in dimensions than the current Airbus A350, offering the same passenger and cargo capacity, while burning 20 per cent less fuel.

“If this configuration becomes the next long-haul aircraft, it will be the most revolutionary change that we have seen since the introduction of the jet engine,” said project leader Roelof Vos from TU Delft.

“This efficiency improvement comes just from the airframe, maybe we can get additional gains from improved engine technology,” hopes Vos.

For the time being, the plan is to put two A350-type engines on the Flying V. But potentially being fed by a new energy source: “The Flying V provides us with interesting degrees of freedom beyond the classical tube and wing configuration. We will be required to think of disruptive changes of our energy infrastructure for the aircraft with sustainable non-drop-in energy sources like hydrogen”, said Daniel Reckzeh, Senior Manager R&T at Airbus. Using hydrogen in powering airliners has so far been hindered by the voluminous tanks needed to store it.

“The integration of new hydrogen tanks is easier in the Flying V as we have more freedom in design. Especially in the outer part of its wings putting in big tanks is far easier than in the slender wings where kerosene is stored today”, according to Reckzeh.

The first flight of the model was successful, although it showed some issues in maneuverability, both in the air and especially on landing, as it came down nose-gear first, which collapsed on touchdown.

“We wanted to convince the world that this is not just a paper aircraft, that it can take off and land, and measure the flight dynamics,” explained Roelof Vos. “We have to fly it as we can’t rely on existing data, that’s why flight testing is so important.”

The gathered data will ultimately enable researchers to feed a simulator. The next test flights are planned for 2021, after repair and adjustments. The researchers admit that a real Flying V aircraft will not quite look like today’s model.

To put a similar concept into reality, at least 25 more years of research will be needed – not least in terms of passenger acceptance, which will be paramount if a new-generation aircraft as revolutionary as this is going to become a success.

The interior cabin concept for the Flying V is a configuration to hold 314 passenger seats in a two-class configuration. Passengers are seated in both legs of the V as well as in the connecting center body. Galleys and lavatories are positioned to ensure sufficient floor space is available.

The main cabin is configured in a 10-abreast configuration with a total width of 6.1 meters, which is wider than the Boeing 777X, which is also configured with 10-abreast cabins. The height between the floor and the ceiling is 2.15m, comparable to the height of the lower deck of the Airbus A380.

Windows are only located on one side of the cabin, reducing the amount of natural light that is entering the cabin compared to current widebody aircraft. However, due to the low radius of curvature of the side arc, relatively large windows can be placed with only a limited structural weight penalty.