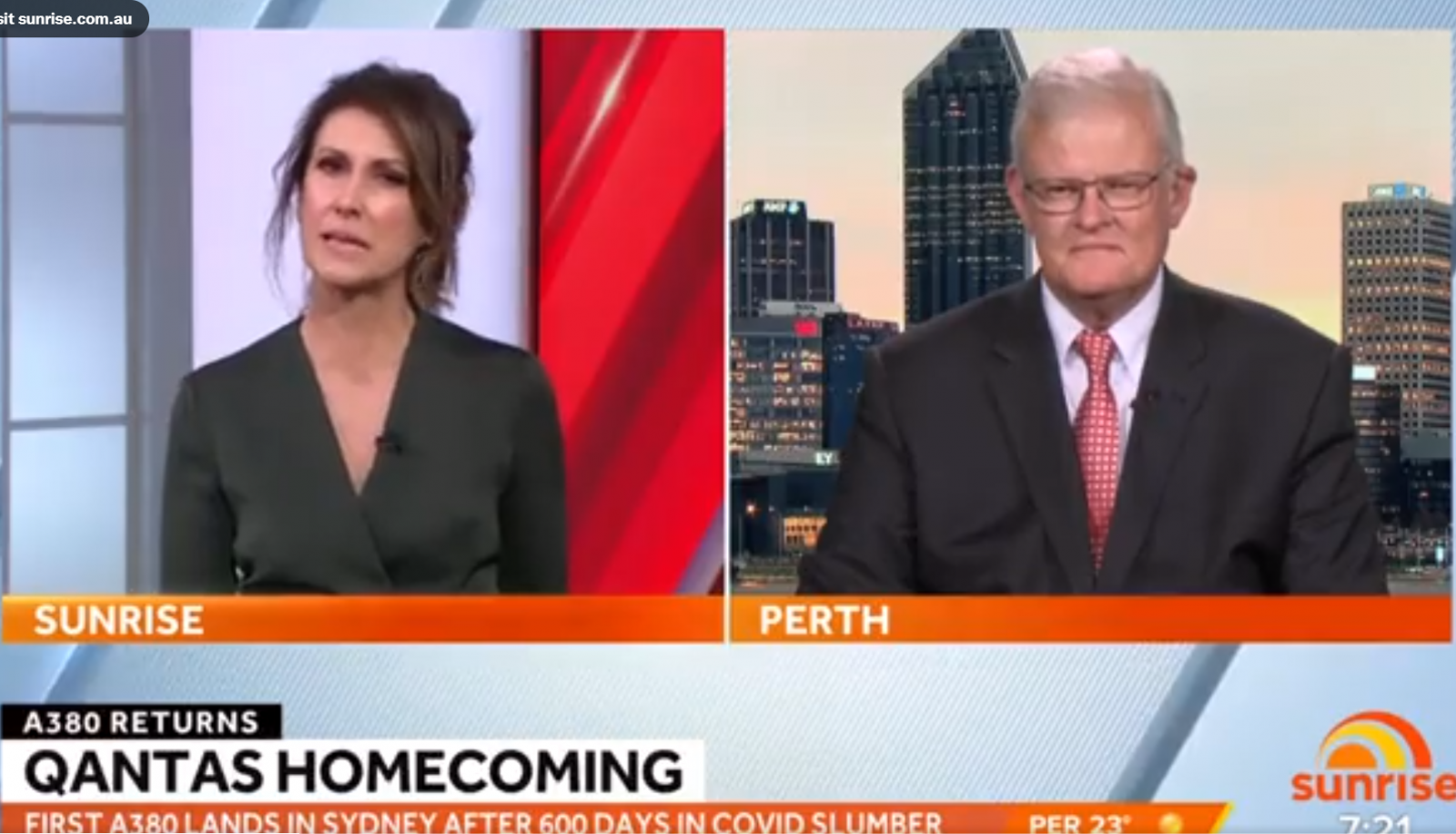 AirlineRatings.com Editor Geoffrey Thomas has appeared on Channel 7’s Sunrise on the occasion of the return of the first Qantas A380 after nearly 600 days in the Californian desert.

Mr. Thomas said the A380, named Hudson Fysh, was “a sign that we are moving out of the pandemic as booking for overseas travel surged” since the country was opened up to international destinations.

The first Qantas A380 superjumbo has returned to Australia after more than 600 days hibernating in the United States ✈️ pic.twitter.com/HC3dGwi4Hi

The early return of the A380 comes as the airline gears up for the first two of the superjumbos to return to service in April 2022, following strong demand for international travel, particularly on key routes to Los Angeles and London.

Qantas has taken close to half a million domestic bookings in the past two weeks, compared with around 20,000 in a two-week period in August.

Demand for seats on Qantas’ London to Sydney service has been extremely strong, with Aussies reuniting with family and friends in time for Christmas and more flights added as a result.

The airline is now working to further accelerate the return of the A380s, with superjumbo flights to London brought forward to July 2022. In addition, a sixth aircraft will arrive before the end of the calendar year 2022, with the remaining four A380s expected to return to service by early 2024.

Hudson Fysh will undergo additional maintenance checks in Australia before taking to the skies again in the coming weeks as part of crew training.

Qantas Chief Pilot Captain Richard Tobiano said it was a terrific day, not just for Qantas crew but also passengers who love flying onboard the national carrier’s flagship aircraft.

“The A380 is a fantastic aircraft and we are very excited to welcome it home today. The early return is symbolic of how quickly demand for international travel has bounced back and this aircraft will play a key role in preparing our crew to return to A380 flying operations in the new year.

“Many of our crew have found other jobs during the pandemic doing everything from working in vaccination hubs and hospital wards to driving buses and tractors, and painting houses.

“Over the next few months, pilots will undergo an extensive retraining period including simulator sessions, training flights and classroom courses to prepare for take-off.”

While it wasn’t flying during the pandemic, the aircraft was cared for by Qantas engineers who carried out regular inspections before it flew to Dresden earlier this year.

Six of Qantas’ A380s have had an interior redesign featuring a new premium upper deck with a new supper club-style lounge and brand-new seats across the Business Class and Premium Economy cabins, as well as a main deck refresh including new carpet and curtains. The remaining aircraft will be refitted before they return to service.