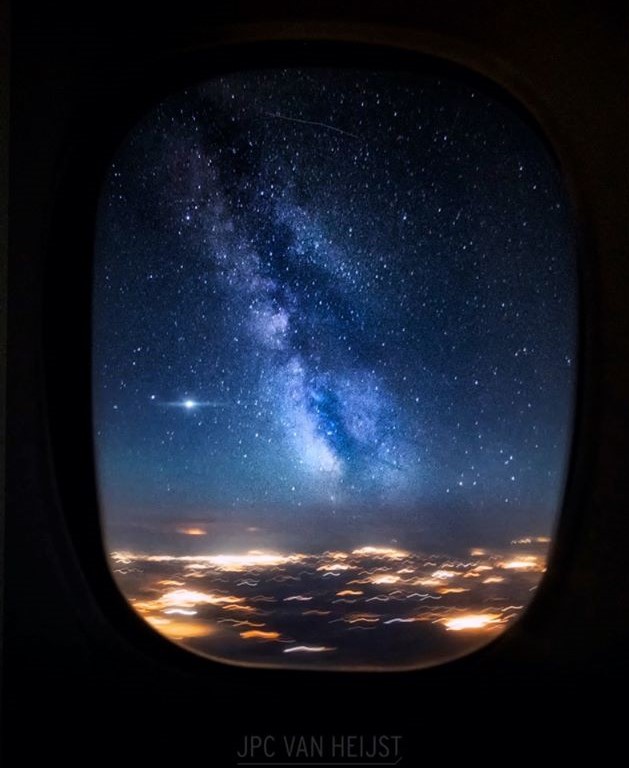 The universe in my window from 747 pilot Christian Van Heijst as he cruises across the city of London.

“Lights of England stream by.

“It’s three in the morning, I assume most people are sleeping. Their minds in a dream state where they wander to imaginary places, live fantastic adventures, and process the impressions and emotions of the day before.

“Far above, hundreds of billions of stars form a glowing band across the night sky: the Milky Way galaxy. Planet Jupiter, our local ‘big brother’ gas giant appears like a very bright star for those who don’t know any better.

“Immense distances unfold before my eyes, though it is impossible to actually comprehend those dimensions and scales.

“I always think about the correlation with the human brain. A jelly-like, mysterious organ we all have (well.. that’s debatable) and is considered the most complex structure in the universe. Consisting of 100 billion neurons, each connected to tens of thousands of other neurons, it not only controls an entire body and holds a seemingly endless amount of information. But more importantly, it produces something deeply enigmatic: the mind. Consciousness. Soul. Words describing something we all know and feel we have, but what has never been defined, explained, or proven. The brain as a bio-computer, self-aware, and contemplating its own existence.

“To add some more secrecy to it all, the relatively recent discovery of Quantum Mechanics has brought to light that consciousness could very well play a fundamental role in what we perceive as reality. The brain with a possibly crucial role in the fabric of existence.
The consequences are far-reaching and will keep scientists and philosophers busy for the foreseeable time, to say the least.

“While I’m gazing at the stars and let those thoughts and contemplations come and go, I realize my own brain is just as mysterious and complex as the depth of the cosmos I’m staring in.

Christiaan is one of the world’s leading aviation photographers and more of his work and more close encounter (s) from his 747 can be found here.
You can follow Christiaan on Instagram here: @jpcvanheijst