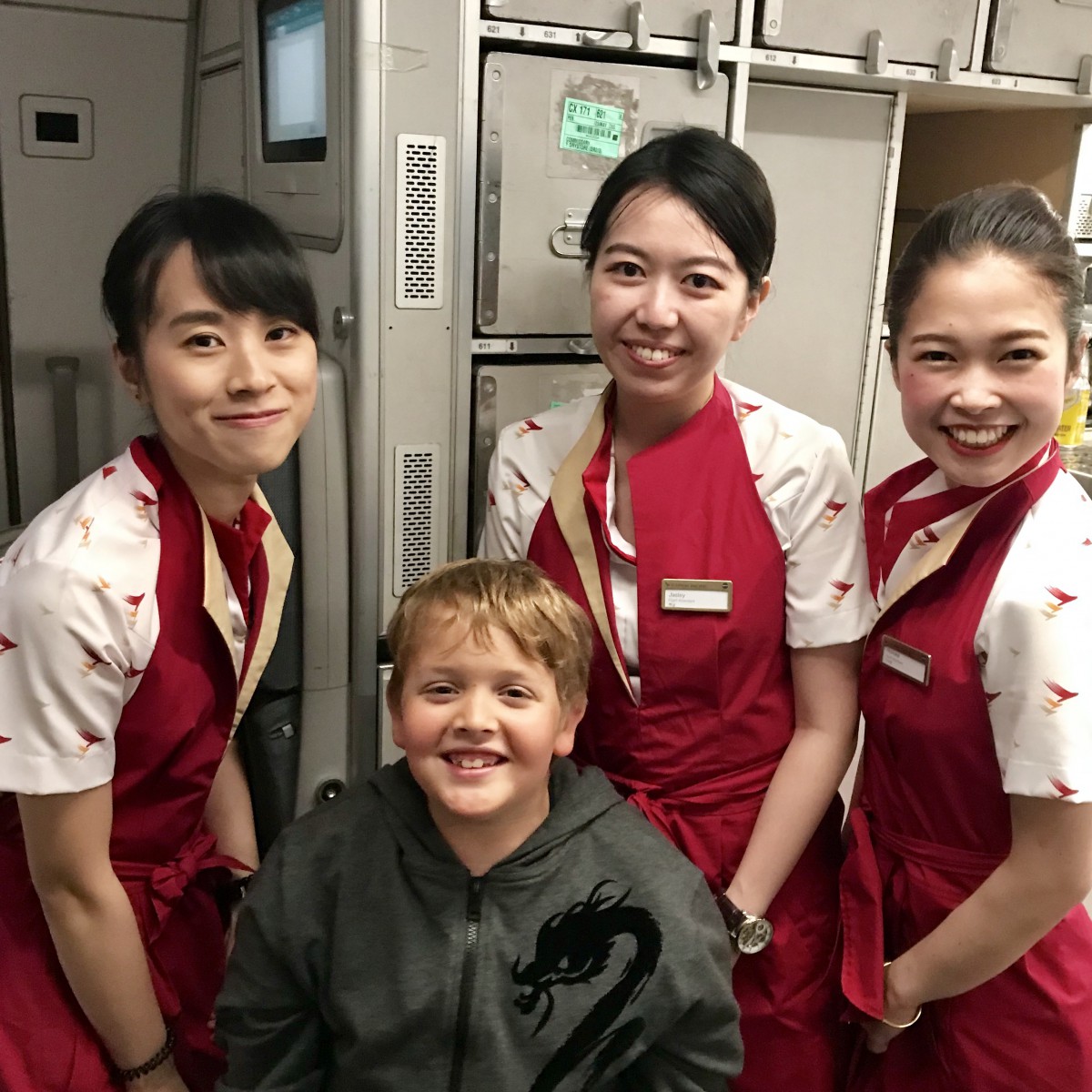 I remember as a child when my family used to travel to Perth Airport to see off or welcome back a family friend or relative because having the airport as a destination qualified as a travel experience.

Seeing planes from the viewing platform, flicking bread at the black swans as they glided over the blue tiled pond, trying to get Dad to slow down as we drove past the Lancaster bomber and the cafeteria where you pushed a tray and collected your plate of sandwiches and fruit cake was enough to regale my classmates on Monday morning for ‘Show & Tell’.

Hands would shoot up for questions.

“What planes did ya see?”

‘Well, there was a QANTAS jet and a British Airways one and another one with a green stripe.”

Make the great leap forward and children are boarding aircraft with a frequency and familiarity that beats the number of times I went to the drive-in before the age of ten.

Tom Parry (9) recently travelled on a Cathay Pacific flight to Hong Kong and the airline was very keen to get a better understanding of a child’s travelling experience.

Like Cathay Pacific, many airlines are learning that children have become regular travellers and often influence the airline that a family may choose to fly with based on the customer service relationship and inflight services available.

While adults may focus on the recent safety record or the on-time reputation of an airline, children focus on relationships and when a flight attendant engages a child in conversation then that can be the difference between a good flight and a bad flight.

Tom will be aghast to read this and see I’ve put it all down to relationships though.  Inflight entertainment is a priority for Tom and while adults were still trying to get cabin baggage into the space directly about their seat and trying to get around someone who has just realised they want the Wilbur Smith novel at the bottom of their bag, Tom has unfurled the cord on his headphones, plugged in and tuned out.  Before the aircraft has lifted off the ground he has mapped out his inflight entertainment itinerary beginning with a new release movie, then a favourite tv show before settling into some games.

As a traveller, Tom can place himself into that calm space of the mind that some adults struggle to find.  He calmly finds a way to open the bag for the headphones, successfully stacks his food containers and cutlery on the tray and doesn’t need a reset on his entertainment system because he’s selected to watch Aquaman in Mandarin.

So, let’s ask Tom about his travel experience with Cathay Pacific?

I begin by asking, “Tom, you’ve been travelling overseas since you were three and this is your second international mission this year, what do you like about big aircraft?”

“Well, big planes are exciting if you can look out a window and see the wings above the clouds because it’s amazing to be so high up in the sky.” he replies.

I ask Tom if he ever goes for a walk around the aircraft.

“I like walking around to meet the staff at the back of the aircraft.  Cathay Pacific had lots of people working on the plane and they all wanted to speak to me and they gave me a special bag and more ice cream than the adults.”

“What did they talk to you about Tom?”

“They taught me how to speak the Chinese language for Hong Kong so that I would show lots of respect.  They were lots of fun teaching me how to say ‘hello’, ‘goodbye’, ‘thank you’ and my Dad asked them to teach me how to say, “Where do I get a ticket for the Star Ferry please?” but that was too hard to remember.”

“Tom, I know you love talking to people.  Did the Cathay Pacific flight attendants listen to your stories about Disneyland?”

“I loved telling them my stories about Toy Story Land and how Dad tried to stop me scoring points on the new Antman and the Wasp ride. They laughed and asked if they could go to Disneyland with me to go on the rides with them.”

Tom also describes the food he was given.  He says there was penne pasta that he described as delicious and bread rolls, mini Toblerone bars and sweet pineapple. His favourite was the Movenpick chocolate ice-cream which he received an endless supply of.

It’s certainly a favourable review from Tom about his Cathay Pacific flight and it feels like a genuine engagement with Tom by the flight crew that allowed his father to enjoy his own flight experience. This is a particularly important consideration if you’re travelling with children.  It’s not about flight crews looking after your children but it is about your children being settled and happy.  While children can no longer visit the cockpit of an aircraft and inflight entertainment and food is expected from full-service airlines, it was the friendliness of Cathay Pacific staff that made Tom’s flight experience special and gave him some stories to tell at school that wasn’t just about Disneyland.

See Tom, you can have great movies and food but nothing is more awesome than great service and friendship.

Out of Australia, Cathay Pacific has more than 70 flights a week to Hong Kong from Perth, Sydney, Melbourne, Brisbane, Adelaide and Cairns.  All flights provide excellent connections from Hong Kong to many cities in China, served by Cathay Dragon.

Inflight dining offers a variety of dishes that are updated regularly.  Inflight entertainment provides the latest movies and television series and music and games to stream throughout your flight.

Cathay Pacific has created new systems to increase recycling and reduce wastage.  The airline has introduced cutlery packs and napkins made from 70% sugarcane and 30% wood pulp and uses biodegradable plastic for blankets, earphones and magazine wraps.

Chris Parry was a guest of Cathay Pacific Airways