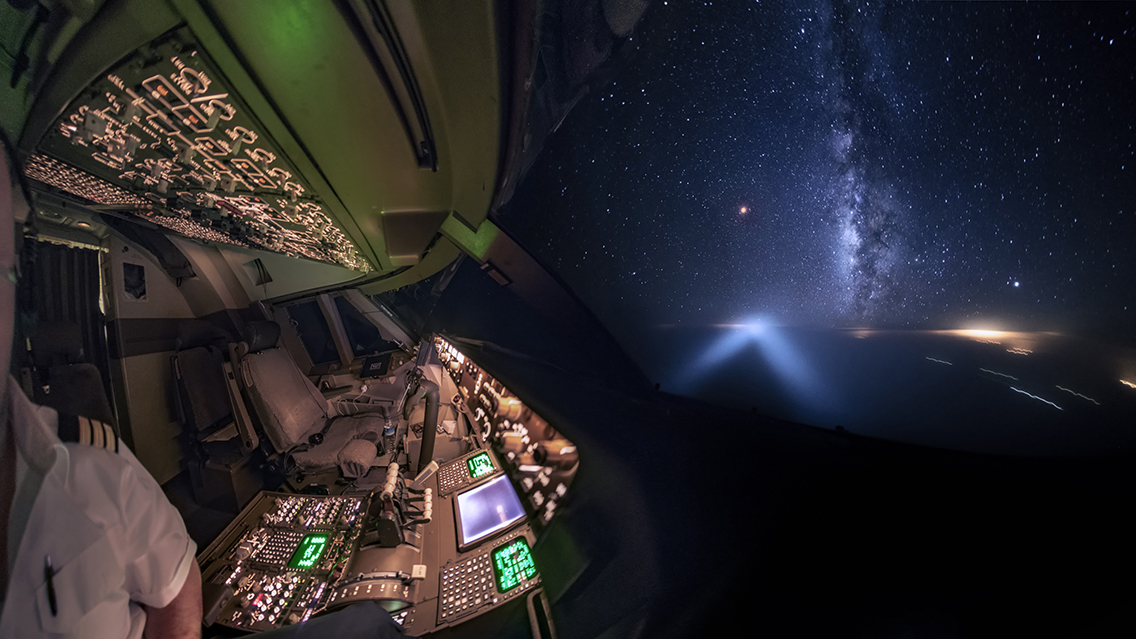 A pilot has captured a dramatic photo of a starry starry night and three planets over the Algerian desert from his Boeing 747.

Christiaan van Heijst, a Dutch pilot with freight airline flying Boeing 747s explains that he was about to start a night crossing of the African continent from north to south, flying over the Algerian desert.

Speaking with Airlineratings.com Christiaan said that “far ahead is the bright band of countless stars that form the milky way and if that was not enough, we’re treated to a rare view on three planets in the same view.”

“The unmistakably orange-glowing Mars straight ahead, Jupiter to the right and Saturn, hiding among the stars of the Milky Way.”

“To add some extra depth I’ve decided to switch on the landing lights that form two strong beams of light that probe the sky ahead,” Christiaan said.

“With flights like these, I’m once again reminded of the fact that I am very privileged to see the world (and beyond) from this perspective.”

In the photo above Christiaan asks: “Have you ever seen the world being illuminated only by the tender touch of starlight? No moon and no lights from the ground, but just the light from the billions of stars above.”

“It is not easy nowadays to get views like these since there is nearly always some sort of artificial light source nearby from a town, city, highway or anything else, that spoils the dim darkness of night.”

“This is a shot I wanted to take for such a long time; no moon, a full milky way core (only visible for roughly 5 months a year) at the right side of our plane, a night flight over a remote part of the planet and no ground-pollution. Even planet Mars is visible just to the left of the milky way.”

“To let our eyes adjust to the total darkness, we dimmed all the lights in the cockpit nearly completely, turned down the displays and enjoyed the nocturnal view that unfolded ahead and around us. Flying over a dark and remote corner of the Congo in the depths of Africa, there were no lights to spoil the illusion of being suspended in a dimensionless void.
On the left, my colleague is leaning forward with his nose pressed against the curved windshield, counting the meteorites and silently enjoying the same view I try to capture on camera.”

Christiaan is one of the world’s leading aviation photographers and his work as seen below can be found here;