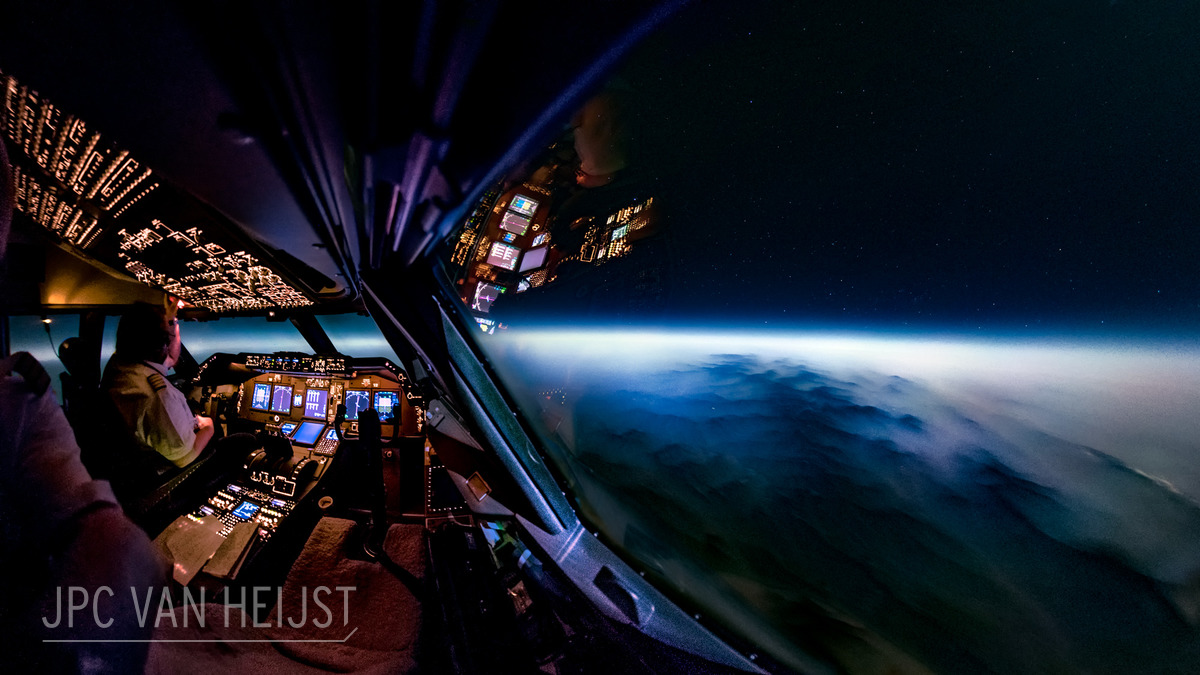 Christiaan van Heijst, the world-renowned 747 pilot with a major cargo airline has revealed his 10 favourite photos taken from his office in the sky.

Christiaan’s brilliant photos have captivated millions giving perspectives on our planet, its near neighbours rarely seen, and mother nature.

VIDEO: If you love flying you will love this DC-3 video.

So here are Christiaan’s favourites.

Sunrise and some small thunderstorms while flying over Arkansas, United States.

The Aurora and moon over Canada. “In the dark; a long veil of Aurora is stretching under the stars while the full moon ahead acts like, a bright beacon for our 747.”

“Whenever I’m lucky to see the northern lights I wonder about the impressions and thoughts of the first human beings to witness them on their trek north. Fear? Awe? Curiosity? Or perhaps a mixture of all of them. Having no knowledge to explain their presence or nature, I can imagine the aurora must have been of divine origin to them; a manifestation of their old Gods and the new.

The moon over a cloudy Pacific. “Endless patches of stratus clouds cover the north Pacific Ocean, while the moon shows her face in the far distance. An island in the sky.”

Milkyway over Brazil. “A long exposure over Brazil shows the brilliance of the galaxy core while countless villages drift by below our wings.”

St Elmo’s fire on 747 windows. “Flying through a storm is causing a mesmerizing show of colourful static discharges on the 747 windows.”

Caspian Sea. “Where land and water meet. The north-eastern coast of the Caspian Sea shows how dramatic the play of colours can turn out.”

Mist and factory clouds. “A thick layer of mist over Germany, protruded by distinct chimney clouds. These puffs are caused by warm convecting air from factories below.”

Aurora and stars over Russia. “Sunrise, a veil of Aurora and a sky full of stars as seen from the 747-8 cockpit.”

Thunderstorms at night. “My colleague enjoying an impressive thunderstorm over the city of Toronto, Canada.”

Contrail under a moon over the Pacific. “Illuminated by a bright moon, the contrail of another 747 ahead of us is glowing like the tail of a comet. Taken somewhere over the cloudy Pacific Ocean.”

Milkyway over Africa. “The bright milky way is glowing in the night sky over Chad, Africa. The flashes of a major thunderstorm and the city lights of N’Djamena are glowing in far distance.”

“Since my first flights as a passenger at a young age, I have been captivated by seeing the world from above. Flying gliders at the age of 14, I quickly shifted my attention to motorized flying and obtained my flying license at the age of 18, weeks before my drivers license.”

“After having studied aeronautical engineering, I decided to pursue my dreams of becoming a pilot and was hired on the Fokker 50 Turboprop by a company called Denimair aged 20.”

“Under leasing contracts, I flew the Fokker 50 for numerous airlines and private/military contractors, including local operations in Africa and Afghanistan between 2004 and 2006.”

“Having appreciated incredible adventures in those years, I was hired on the 737NG to fly across Europe for a Dutch charter company in 2006, but the taste of adventure was still in my veins. At the age of 27, I was lucky to be hired by a major European cargo company on as a First Officer on the 747-400 and -8, being the youngest Dutch pilot to fly the 747 ‘Dash-Eight’ around the world in 2011.”

“Today, with over half of my flying hours on the 747, I still feel extremely privileged to fly for a living and see the entire world from my cockpit.”

“Ever since my first flights I have felt the urge to capture the views I’m presented with. Perspectives that are unique and change constantly, never to be seen again. I sensed it was simply my duty to capture the world from above.”

“With the emergence of social media, my name and photography began to grow into what it is today.”

“In 2015 my first book ‘Cargopilot’ has been published and this triggered a whole new endeavour that leads to a rewarding creative career next to flying.

“I have found that writing and photography is a powerful combination to convey emotions and I look forward to developing both of these creative expressions further in the years to come.”

Christiaan, a 747 pilot,  is one of the world’s leading aviation photographers and more of his work and more close encounter (s) can be found here.