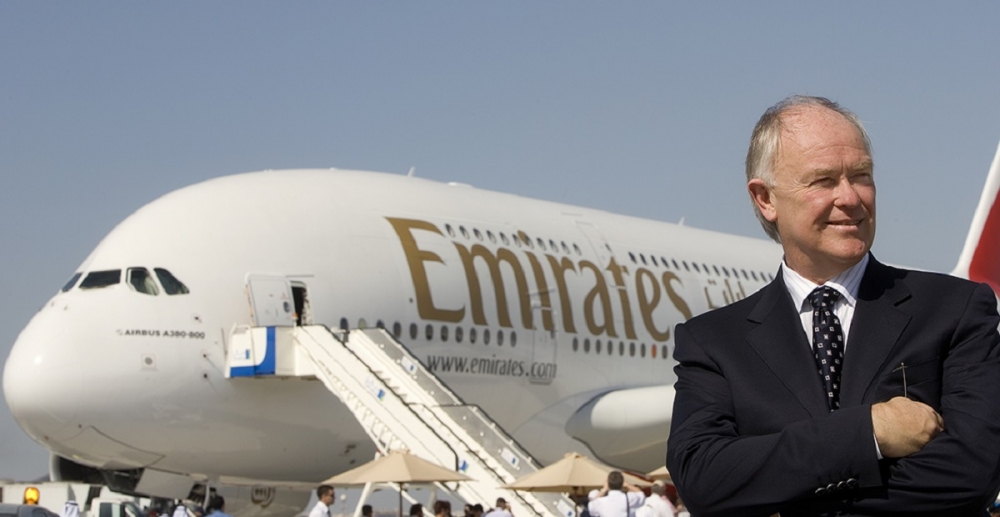 The clock is ticking on the latest order for the Airbus A380 but the man at the center of the crucial deal, Emirates president Tim Clark, sees the superjumbo remaining an important part of the airline’s fleet into the 2030s.

The Dubai- based carrier’s decision in January to buy a further 20 A380s and take 16 options saved the program from being axed and gave it breathing space.

But media reports this week speculated about an impasse or stall of the deal, even a possibility of failure of the whole A380 program survival.

Negotiations between Emirates and Rolls-Royce have reportedly stalled on the manufacturer’s inability to meet fuel-improvement guarantees previously given, according to Bloomberg

The additional aircraft are due to be delivered from 2020, bringing the total A380 orders of the Dubai-based carrier to 178 — it currently flies 106 — and timing is tight.

“Propulsion remains an issue, we still haven’t resolved propulsion on the new order yet and haven’t chosen a supplier so far. We are still looking at all of this,” Sir Tim tells  AirlineRatings in an exclusive interview in Dubai. “We have to decide by the end of October.”

Sir Tim is having none of the media speculation and is looking further ahead.

“I can never say never about ordering more A380s in the next decade. Much will depend on propulsion and on Airbus itself. With the orders we have we can see these aircraft fly to the late 2030s,” he says.

“The A380 is probably the biggest USP we have,” says Clark, with product upgrades coming in the pipeline: “We are trying to get our new First Class suites onto the A380 by 2021, while Premium Economy is coming already in 2020.”

Before that, he will have to ground almost half of his fleet during a 45-day renovation of the southern runway 12R-30L at Dubai International Airport which is due to take place from late April to early June 2019.

Normally the airport handles over 1,100 movements a day, the runway closure cuts that down by 43 percent.

READ: Emirates deal allows Dubai arrivals to get Uber and out.

“I have to put 50 aircraft on the ground during runway renovation, all over the place,’’ he notes.

“We might operate one or two A380s out of Dubai World Central in point-to-point traffic to deal with Easter demand, but otherwise it’s not ready, we can’t do that.”

He expects a full move of Emirates’ operations to the yet-to-be fully built up new airport “by the late years of the next decade, in ten years plus from now.”

In the meantime, the focus is on increasing efficiencies of the current terminals at Dubai International, which can’t be further extended.

“That is where FlyDubai comes in,’’ he says. “When we start to integrate with them we will put some flights of FlyDubai in the southern terminals from November.”

READ our ratings for Emirates

Emirates also has 250 people currently at using artificial intelligence to re-invent  IT processes and standards that Clark refers to as “Jurassic”.

“AI allows us for example to become a lot better in aircraft stand planning for more efficiency and to bring unit costs down,” enthuses Clark.

Müller tells AirlineRatings that with his new tools it is possible to predict the exact minute an aircraft will appear at a gate twelve hours in advance, enabling better utilization.

“This is about knocking everything down and rebuild it again, AI is going to make everything a better place,” Clark adds.

The Emirates president, the last executive who has worked at Emirates since its foundation in 1985 besides chairman Sheikh Ahmed, vigorously denies on-going speculation about an imminent merger between his company with Abu Dhabi-based rival Etihad.

“I don’t know where it came from,’’ he says. “I talk to Etihad CEO Tony Douglas a lot more than to his predecessor James Hogan about things that we could do together, which align and work together to deliver value together.

“He is much more open and recognized they are in a bit of a hole and they have to do the things he is doing. And also (he) works with us, and not against us, in areas that we could.

“We have been talking about sharing bits and pieces, but that’s as far as it got.

“But then headlines like ‘Emirates is buying Etihad’ came out. I asked the Sheikh: ‘Is there something I should know?’. He said ‘No, I don’t know.’ This isn’t gonna happen, there is just nothing like that.”

One of the reasons for that is regional politics.

“You have to understand the politics of the region, the interactions, all the forces at play,’’ he says, noting a merger could be something that happened on paper but would not come about in practice.

“Both Emirates respect competition and value brands. If you consolidate as one there is no competition.”

He says the issue is ultimately one for the governments of Dubai and Abu Dhabi.

“I’m just handling the business of the airline,’’ he says. “But I have no knowledge of this.”

Another issue seldom discussed by Sir Tim, a highly respected and powerful industry leader who turns 70 at the end of 2019, is his succession and when he might retire.

In talking to AirlineRatings, he is fairly firm.

“You’ve got to be able to mentally and physically lead a business,’’ he says. “Time will knock on the door and this is a younger man’s business.

“And I say that even more now as change in the business is moving at such a pace. People say ‘that’s nuts that you are so involved’ and I say but that’s what I do.

“My succession will be determined by the shareholder. When I choose to go that will be it.”

He adds:  “It is very big shoes for anyone in this seat. It may be better that people are more transitory than I have been.”

Sheikh Ahmed, the chairman, has stated publicly that he would like to see an Emirati take over the President’s job, rather than another expat.