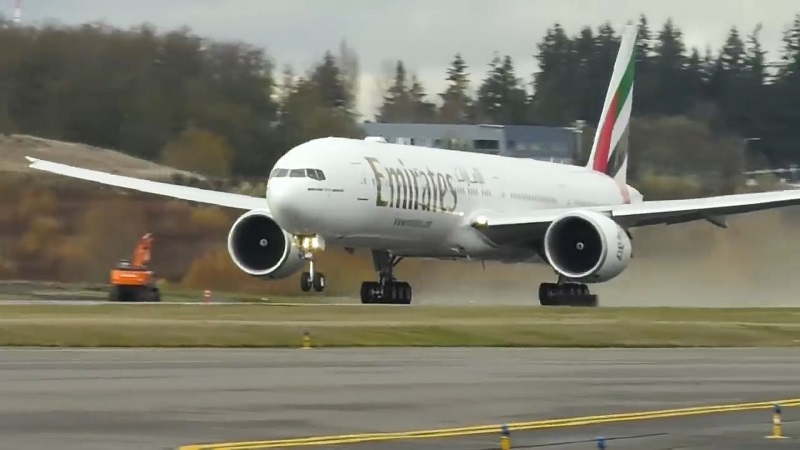 After 146 deliveries, Emirates is closing the doors on the Boeing 777-300ER aircraft that has been synonymous with its extraordinary expansion.

The Dubai-based carrier this week took delivery of its last Boeing 777-300ER, A6-EQPO, as it switches to the latest variants of massively popular twin-engine widebody.

Now the world’s biggest operator of Boeing 777 aircraft, Emirates received its 777-300ER in March 2005. The arrival of the final plane will bring its overall 777 fleet to 190 aircraft.

The figures associated with the fleet are impressive: the airline’s 777s have carried close to 350 million passengers on more than 1.28 million flights and covered over 6.6 billion kilometres — or more than 8600 return trips to the moon — since 1996.

It is the only airline to have operated all six 777 variants, including the Boeing 777-F dedicated freighter, and has taken one out of every eight of the planes manufactured by Boeing. That figure drops to one in five when it comes to the -300ER.

“The Boeing 777-300ER has been a cornerstone of Emirates’ success story as the world’s largest international airline,’’ Emirates president Tim Clark said.

“The aircraft’s efficiency, range and payload capabilities have enabled us to connect our customers across six continents to and through Dubai, and offer them a flight experience that is second to none.

“With 140 of these aircraft in our fleet, the Boeing 777-300ER will continue to play an integral role in our operations and facilitating global tourism and trade opportunities in the years to come.”

Sir Tim said Emirates had worked closely with Boeing on the 777 program over the last three decades and it would build on the partnership as it started taking the latest 777-8 and 77-9 program from 2020.

Even before the new planes arrive, however, The Dubai carrier boasts one of the world’s youngest aircraft fleets with an average of 5.87 years as it pursues a strategy of maximizing efficiency.

It also continues to invest in product and services, recently unveiling new cabins for its Boeing 777-300ER aircraft that include fully-enclosed First Class private suites as well as newly-designed seats and improved inflight entertainment.

It has also started a program to reconfigure its 10 Boeing 777-200LR aircraft with wider business class seats as well as a refreshed economy class.

The aircraft will be leased and operated by China Southern and sports a special livery commemorating the production milestone.

“Since its first delivery in September, 2011, the 787 family has flown nearly 300 million passengers on more than 1.5 million flights around the world, including more than 210 new nonstop routes made possible by the airplane’s superior fuel efficiency and range,’’ Boeing said.