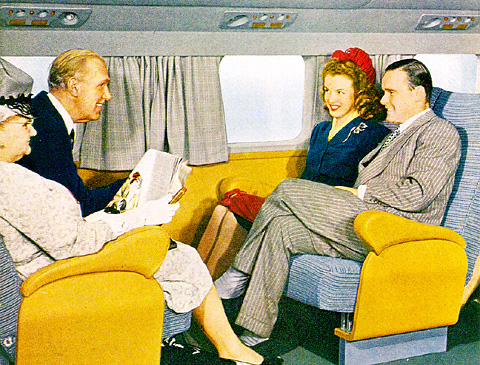 In an extraordinary twist the film star who started her career in 1946 modelling for the Douglas Aircraft Company in its then brand new 70-seat DC-6B passenger aircraft has been voted today as the most glamorous flight attendant.

In a survey of 1000 people conducted by American Airlines in the UK, Marilyn Monroe was selected as the first-choice fantasy flight attendant from the golden era of film with 22% of the overall vote. Audrey Hepburn was second choice with 20%.

George Clooney (22.5%) led Prince Harry (21.4%) as the favourite fantasy pilot of all time, with Angelina Jolie rated as the highest scoring female with 10.8% of the vote. US President Obama (11%) lay in fifth place behind the star of The Great Gatsby and Aviator – Leonardo DiCaprio (11.6%). The brand new Superman, Henry Cavill scored just 1.9%.

Jennifer Aniston (18.1%) topped the pole for favourite flight attendant from modern day stars with Kate Middleton (17.1%) in second place and Angelina Jolie (14.7%) in third. Pippa Middleton matched Beyonce’s popularity, each with just under 11% of the vote. They were both beaten by the highest scoring man – Prince Harry – with 11.9%.

The survey was conducted to launch American Airline’s brand new B777-300ER aircraft on the route from London (Heathrow) to Hollywood (LAX).

In 1946 Norma Jean Baker, later Marilyn Monroe, answered an advert to model for Douglas Aircraft. The images taken are now copyright and cannot be shown but the cover of the in-house Douglas Airview Magazine is shown here.