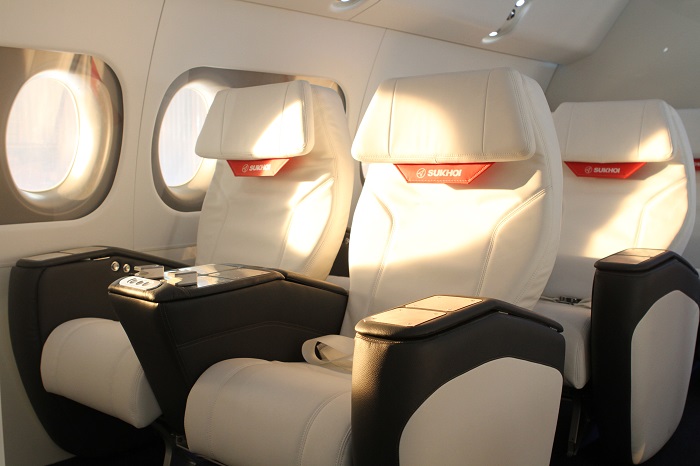 Russian aircraft maker Sukhoi Civil Aircraft will be adapting the Sukhoi Superjet 100 (SSJ100) interior specifically for professional sports teams and will showcase the concept at Rio2016, the Summer Olympic Games which are starting in Rio de Janeiro, Brazil on August 5.

The concept was unveiled at the Farnborough International Airshow, near London, in July and now a 12-meter full-scale cross section of the ‘SportJet by Sukhoi’ cabin will be displayed at the Russian Olympic Team Fan House in Copacabana, Rio de Janeiro, where Sukhoi hopes to sign up its first orders.  The mock-up cabin will be presented from 5 to 21 August.

The SportJet will be the third product in the range of Sukhoi Civil Aircraft alongside the SSJ100 and Sukhoi Business Jet concepts. The SSJ100 is being used by several airlines, mainly Russian airlines but also by Mexican low-cost airline Interjet and the Ireland-based regional carrier CityJet. The fly-by-wire twin-engine regional airliner is certified to carry up to 108 passengers in an all economy configuration in a dense seat pitch of 30″ configuration. The SSJ100 aircraft of CityJet has a 98-seat configuration, five abreast seating in a 32” seat pitch while Interjet’s SSJ100s feature 93 seats with a generous 34” (86 centimeters) space between each row. Interjet uses the aircraft on domestic routes in Mexico but also on services to the USA.

The SSJ100 entered into commercial operations in 2011. The aircraft was developed in a cooperation between Russia’s Sukhoi and Italy’s Leonardo-Finmeccanica. Several Western aerospace companies were involved in the project such as Honeywell and France’s Thales, who provides the SSJ100’s fly-by-wire avionics. All models of the SSJ100 are equipped with two PowerJet SaM146 turbofans. PowerJet is a 50-50 joint-venture of France’s Snecma and Russia’s NPO Saturn.

The underlying idea for launching the SportJet is quite simple according to Evgeny Andrachnikov, senior vice president of commerce at Sukhoi Civil Aircraft. The sports industry has grown massively over the past decades and thus amount of air travel for athletes. And athletes themselves are taller. Sukhoi estimates the value of the sports air transport market to be USD600 million per year.

"We do believe a market niche does exist in terms of an aircraft designed to carry a professional sports team," Mr. Andrachnikov said during a briefing at Farnborough.

Athletes spend half of their time in the air, going to and returning from a game.  Teams and sport clubs mostly do not travel on normal, scheduled flights; they charter aircraft – mostly narrowbodies. The National Basketball Association (NBA), the pre-eminent men's professional basketball league in North America, for instance has a deal with Delta Air Lines to charter 11 Boeing 757-200s.

But are teams rich enough to buy their own, specially fitted aircraft? Of course, Mr Andrachnikov said. “There are plenty of people that invest hundreds of millions of dollars in professional sports team.”

What does the SportJet by Sukhoi offer? It promises a lot and it looks fab.

The company developed its new SSJ100 variant in cooperation with sports physicians, experts and managers. It uses innovative medical and IT solutions aimed at limiting the impact of flights, jet lag, hypoxia, dehydration, stress on the body and aerophobia that affect professional athletes from various sports. “In elite sports, where fractions of seconds and inches are of decisive importance, every detail matters in affecting the shape of the athlete. Today, to achieve the best results you need new technology and approaches, including those that increase the flight quality and, hence, the physique and morale of athletes,” Mr Andrachnikov noted.

The layout of SportJet by Sukhoi will feature four “zones” each with different equipment and catering to a different functionality:

The luxury, leather business class seats fold down to an almost horizontal position. Each seat has integrated biomedical gadgets, variable lighting and individual multimedia display units with special content. The devices are integrated in the armrests, backrest and under seat.

The biomedical gadgets monitor the athlete’s dehydration, hypoxia, stress, heart rate etc. before, after and during the flight.

The “airband” is part of the SportJet’s seat equipment. Sukhoi touts this as “the world’s first mobile diagnostic device that should be worn during the flight.”  The wearable can detect an athlete's condition and sends data to their own mobile device or to the team specialist.  Data include recommendations on how to get the highest comfort during the flight, eg hydration levels.

The AeroScan diagnostic capsule is part of the recovery zone and provides a comprehensive assessment on all the athlete's physiological indicators.  The multi-functional seat integrates specific diagnostic equipment including a bio-impedance sensor with cable and electrode plates, a ECG recorder, a spirometer, a hypoxic generator, a blood pressure monitor, a pulse oximeter, a dynamometer, and a data reading and processing unit. An ergometer is optional.

A comfortable area for the coaching staff furnished with all necessary equipment for matches review and analysis of a player's performance.

Other gadgets include aircraft cabin lighting that imitate the color scheme of the club. As a general rule, Sukhoi will provide customized SportJet versions for professional teams in all sports across the world, varying from football and hockey to basketball and rugby.

The SportJet by Sukhoi will go into production in 2017 once it receives sufficient orders and then will be delivered to customers in 2018. Asked how many SportJet aircraft the company hopes to have flying in two years’ time, Mr Andrachnikov said: “I can only fantasize, but I think we can start with 10.”