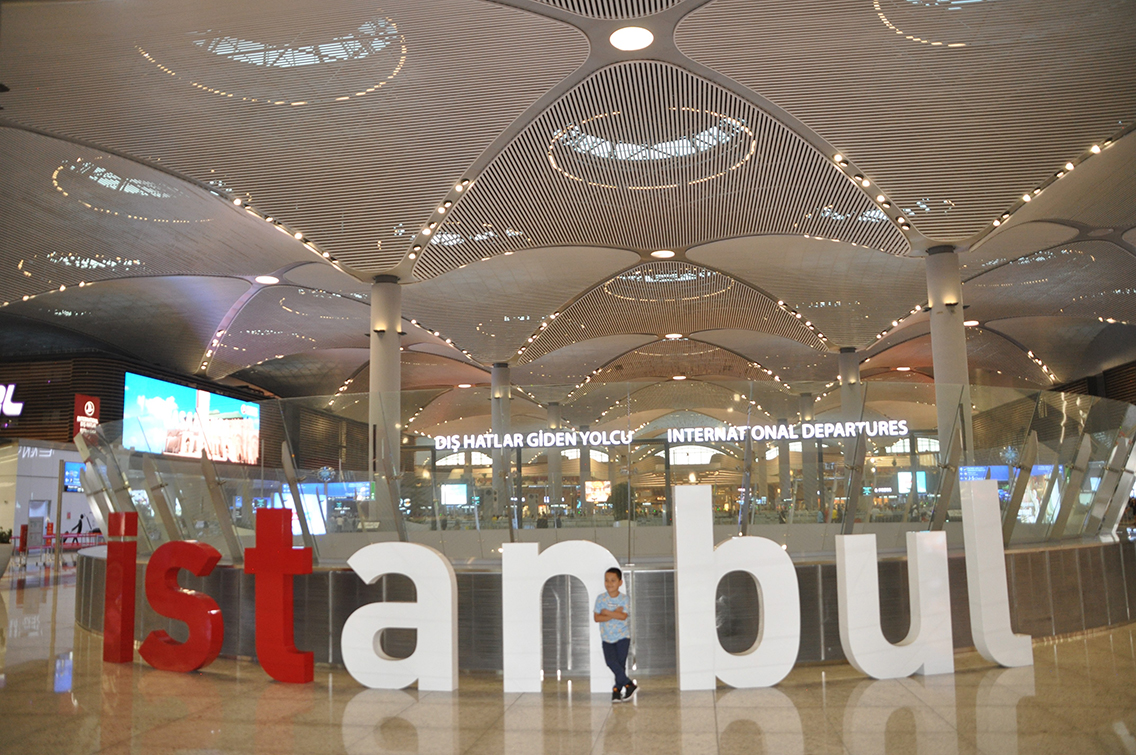 Record-breaking Istanbul Airport, which was built in just five years, faces challenges ahead before it reaches its full potential as one of the great hubs of the world.

The foundation stone was laid in June 2014, the new Istanbul Airport started soft operations on October 29, 2018, with all flights moving 40 kilometres north from the old Atatürk airport on April 7, 2019.

The airport perimeter is the largest in Europe, measuring 7,640 hectares. Globally, only the airports Denver/Colorado and Dammam in Saudi Arabia have an even larger footprint.

READ: Boeing to offer Qantas a special version of 777X-9 for ultra-long-range routes

The start has been surprisingly smooth for such a large operation, being the hub of state carrier Turkish Airlines’ fleet of 333 aircraft, serving 307 destinations in 124 countries from Istanbul, plus currently, 70 airlines flying here, upping the number of total cities accessible to about 350.

Surprisingly, no carrier from North America serves the Turkish 15-million-people metropolis on the crossroads between Europe and Asia, and neither from Japan. While Turkish Airlines operates to the US, Canada and Japan, the COO of the private airport operator consortium iGA, Mehmet Büyükkaytan, tells Airlineratings.com in an interview that “we look for services to Australia, which is the only real white spot on our destination map.”

With its preferable geographical location Istanbul hopes to ultimately surpass the big Persian Gulf airports in traffic. While the old Atatürk airport despite utter congestion handled 68 million passengers in 2018, the terminal capacity of the new airport is already 90 million.

In the final stage, by 2028 at the earliest, up to 200 million passengers a year are supposed to be handled at what might become the world’s biggest airport. Once 80 million passengers are reached the next expansion phase is due to be started, with a second satellite terminal and a fourth crosswind runway. Currently the airport uses two main independent runways in parallel operations while boasting a narrower one besides as a “reserve runway”, as the COO explains.

By mid 2020, a third main runway is due to be operational, which will be the first on the eastern side of the terminal. The building itself is the second biggest in the world under one roof, occupying a space of 1.4 million square meters, only Dubai’s Terminal 3 is more spacious with its 1.71 million square meter footprint.

In the first four months of operations, passenger numbers have somewhat surprisingly decreased by 2.4% compared to the same months the previous year at Atatürk airport. While international traffic has increased by four to five per cent, domestic passenger numbers in Turkey, a large country of about 80 million inhabitants, are down by 15 to 16%.

While this trend had started even before the move, the airport COO blames it mostly on the Boeing 737MAX crisis, of which Turkish Airlines had a dozen delivered yet, all grounded at the new airport for now.

In Turkey, criticism of the airport is growing, directed at a prestige project of President Recep Tayyip Erdogan officially costing the equivalent of AU$16.8 billion, while including all infrastructure the sum might be three times as high. Many experts always asserted it has been built in the wrong location, a formerly hilly wooded marshland on the shores of the Black Sea.

And they have many arguments – potentially dangerous wind shear is a problem which has led to a considerable number of go-arounds at the new airport, as even the Turkish transport minister has acknowledged. The main potential challenges to airport operations might only come in the northern autumn season shortly. Besides wind, the coastal area is fog-prone, and also lies in the midst of one of the world’s most important bird migration corridors. In October alone, about a million storks on their way south appear annually over the Bosporus – increasing the danger of bird strikes around the airport. Another major criticism are the extremely long distances on the ground, both for taxying aircraft and also for passengers inside the giant terminal.

The airport operator has given airlineratings current numbers to counter these criticisms. According to these official figures, the number of both go-arounds and bird strikes have been less at the new airport in its first four months compared to the same months at Atatürk airport in the same months a year earlier.

What is not taken into account, though, is the fact that the airport hasn’t operated yet in the season which is most prone to wind, fog and bird migration. The airport also tries to deflect criticism of long aircraft taxi times. Currently, the average taxi time after landing is 13.5 minutes, before take-off 25.5, while the overall average at Atatürk was 20.5 minutes. At New York JFK, Istanbul airport points out, the average taxi time is over 28 minutes. Once the third runway is operating, taxi times should be visibly reduced for many flights, “and also we never need to put aircraft into holding patterns as we used to before”, says Mehmet Büyükkaytan.

There is no remedy to be expected for passengers complaining about long walking times, however. The terminal layout with a huge central building and five finger concourses is such that it would be difficult to install any people mover or passenger train to expedite the user’s journey. It remains a mystery, however, why there couldn’t be more moving sidewalks installed.

Even the Turkish Airlines lounge has posted advice that some remote gates require up to 25 minutes walking time – and that is for passengers who are already airside, beyond security checkpoints. One other major bottleneck will ease by mid or late next year at least – the swift connection to the city. Currently, the only links are by road, with a total of 22 shuttle bus lines providing access to the huge metropolis.

The website of the bus operator claims a trip to central Taksim square will take 80 minutes for 40 kilometres, which the airport disputes. When airlineratings checked at mid-day on a weekday, each journey took about 45 minutes. From next year a metro line to the new airport will be opening, promising a swift journey of just 25 minutes to central Gayrettepe station, half the time it took to reach the old airport by rapid transit.