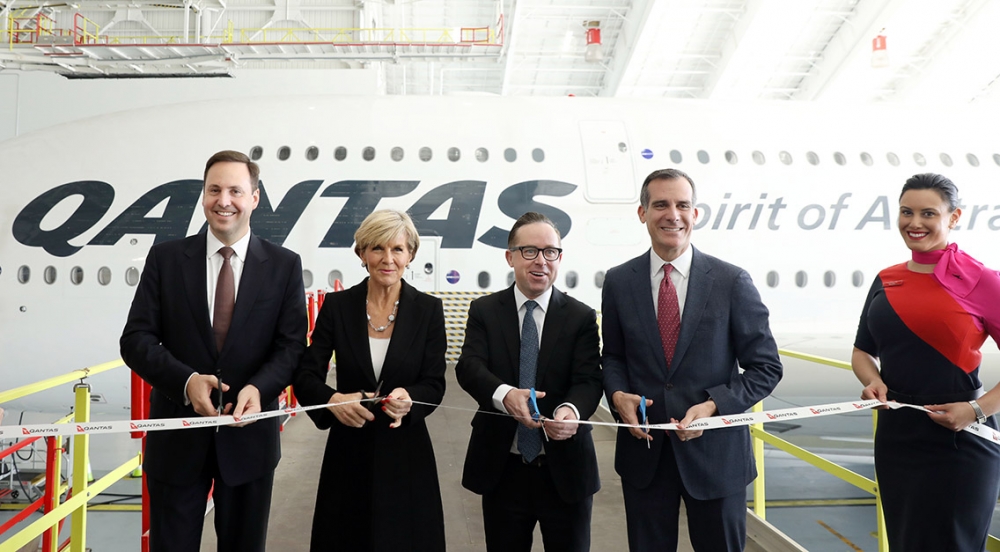 Qantas has unveiled the first A380 engineering facility in North America at Los Angeles International Airport, at investment of more than US$30 million.

It is one of the largest commercial hangars in North America and the first specifically designed to accommodate the Airbus A380.

Because of passenger’s desires for overnight flights and time zone constraints Qantas aircraft spend up to 12 hours a day in Los Angeles, whereas in Australia cities they turn around in under three hours for the return Pacific crossing. Thus, the airline has been using that time for decades for maintenance work.

The new 5.7 hectare site will also be used to carry out maintenance checks on Qantas’ Boeing 747s and later787-9 Dreamliners when it enters service in late 2017.

Also, the larger size will enable Qantas to bid for work on other carriers’ aircraft.

Qantas Group chief executive Alan Joyce said “Australia will always be where we do the majority of our maintenance, and we’ve invested heavily in our onshore facilities in recent years, but LAX is our next biggest transit point so we’re pleased to now have a facility that reflects that.”

“We can have up to four aircraft on the ground at LAX at once and some are here for around 14 hours, so it makes sense to have a facility where we can make good use of that time by doing scheduled maintenance.

“Ultimately, this helps us increase the amount of time our aircraft can spend serving our customers,” Mr Joyce said.

With 50 per cent more space than the airline’s previous LAX hangar, the facility has the capacity for four aircraft to be worked on simultaneously.

Its higher capacity is expected to cut the time it takes to carry out maintenance tasks by about 20 per cent.

Qantas operates more than 40 return flights per week from Sydney, Melbourne and Brisbane to LA using A380s and 747s. Boeing 787-9 Dreamliner services on the Melbourne-LA route begin in December 2017.