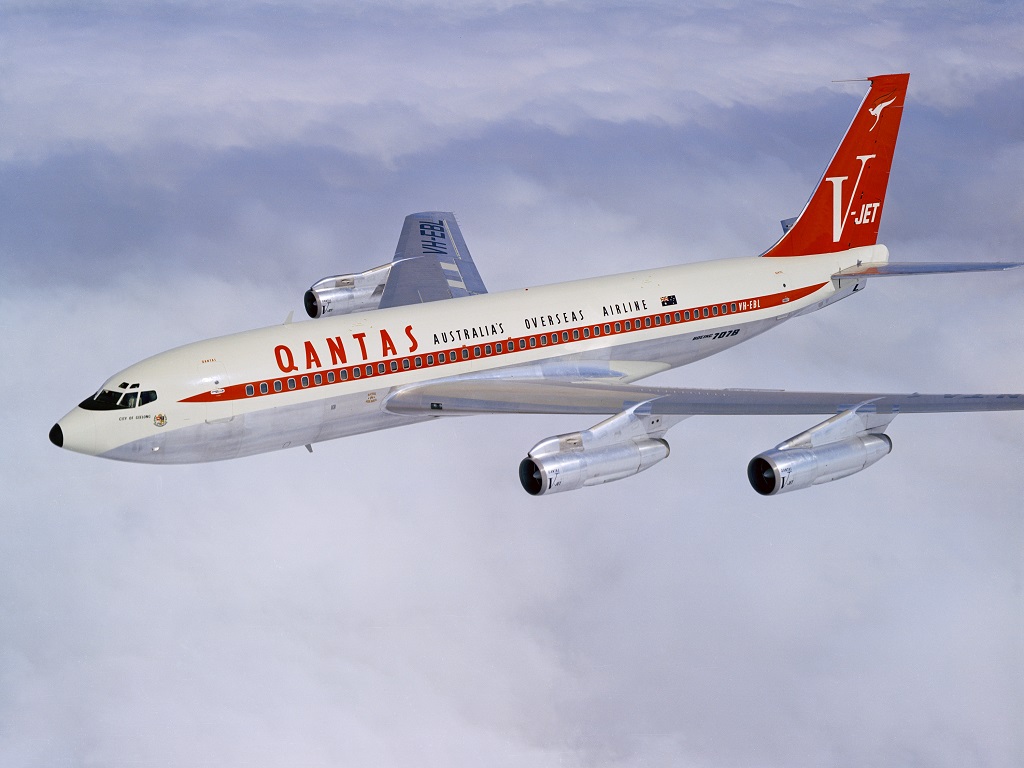 Sixty years ago on July 29, 1959, Qantas became the first airline outside the US to launch the Boeing 707 with service from Sydney to San Francisco, and overnight the tyranny of distance disappeared.

With its speed came productivity, while its size and jet power brought lower costs and thus lower airfares, moving air travel from the exclusive realm of the rich and famous into the reach of the everyday traveller.

Below is a video produced by Qantas to celebrate 50 years of jet travel.

Mr Allen had taken a ride in one of the company’s jet B-47 bombers in 1950 and had a “transformational experience” and was convinced that the future was jet travel.

But instead of a sedate fly-past, to everyone’s amazement, Mr. Johnston put the Dash 80 into a barrel roll which, while not overstressing the aircraft, gave Mr. Allen severe heart palpitations.

Below is Mike Machat’s famous painting of the prototype 707 – the 367-80, performing the Barrell roll over Lake Washington in front of hundreds of airline executives

Not content with one roll, Mr. Johnston brought the Dash 80 around again and repeated the stunt — in case any of the airline executives thought they were seeing things.

The next day, legend has it that Mr. Johnston quipped to Mr. Allen, when asked about the barrel roll: “I was just selling airplanes.”

The 707 had a price tag double that of the piston engine aircraft it would replace but it would produce three times the revenue.

Qantas ordered a special longer-range version of the 707 that could operate out of Nadi in Fiji, and it started operations on July 29, 1959, to San Francisco.

London followed on September 5 and the first-class return fare to London at the time was $1755, with an economy return ticket of $1170.

The graphic below shows the dramatic decrease in the cost of travel when jets were introduced in late 50s as expressesd in number of average weekly earnings.

The 707 and the DC-8 blitzed the great ocean liners and even as early as 1960, more travelers went by air across the North Atlantic than by ship.

Below are some Boeing adverts extolling the virtues of jet travel.