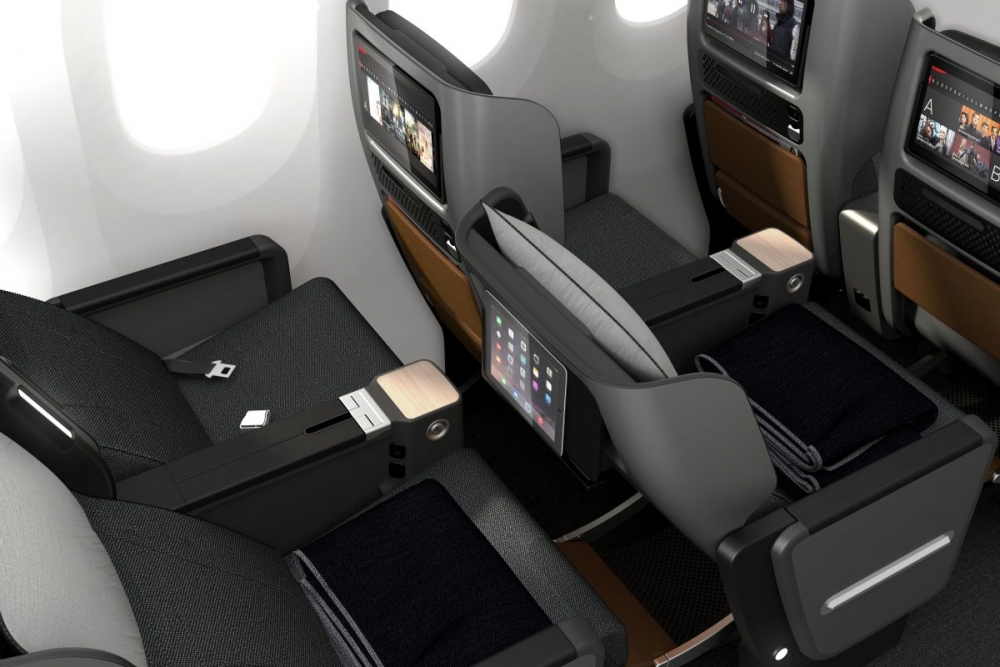 Qantas has touted its Premium Economy seat on its Boeing 787s as the world’s best.

Bold claim? Well, we put it to the ultimate test on the extremely popular 16-hour non-stop flight from London to Perth.

Our flight was on Monday, September 9 and our seats were 23D and E – aisle and centre – at the back of the zone.

There is no question that this class is all about the seat and legroom and at 194cm (about 6ft 4inches) I am probably an unfair critic.

Certainly, the last row of Premium economy on the Qantas 787 is not the place to be if you are my height as there is barely enough legroom and not enough if the passenger in front reclines, which is extremely likely on an ultra-long-haul flight.

Luckily for me, the delightful old lady in front did not recline!

I suspect that the last row of Premium Economy doesn’t quite offer the advertised 38-inch legroom which is 6 inches (15cm) more than economy.

It should be noted that Air New Zealand’s premium economy seats are set at 41 inches apart, Virgin Australia’s 41 inches and Cathay Pacific has them at 40 inches.

Another area of concern is the heavy padding in the right-side seat belt. I am not sure why it is there but it is annoying particularly when you have the table out.

But let’s get positive. The seat is wider by 10 per cent than the existing Qantas premium economy seats and the headrest can be fitted with a specially designed pillow to support and wrap around your head. Great idea!

There is also a re-engineered footrest that makes reclining more comfortable although of no use to me because of my lanky legs.

The hi-def Panasonic inflight seatback screen is about 25 per cent larger than previous and there are five individual storage compartments, plus two USB charging points per seat.

However, the charger in the seatback in front cannot charge most devices I am told by AirlineRatings.com seating expert John Walton and certainly wouldn’t raise a spark in my iPad.

Our crew on QF10 on September 9th were superb.

We were looked after by Tim who was very attentive and couldn’t do enough to help make us comfortable.

Onboarding my coat was taken away and replaced with a glass of champagne as we settled ourselves in.

A quick glance of the menu reassured us that our culinary desires would be well looked after.

Departure was scheduled for 12.10pm and we got away at 12.36pm but no stress the captain said we should arrive on time at 11.55am the following day.

After an effortless take-off from Heathrow, the cabin crew quickly appeared with drinks and nibbles as we settled into a movie feast.

One excellent aspect of the Qantas premium economy service was the fact that the crew, food and wines were from the business class section, not the economy.

It has been my experience that when the service comes from the economy cabin crew it is substandard and almost an after-thought.

Back to our flight. Lunch was served over Romania and I chose the braised beef with potato mash, beans and carrots. The tray also had a light salad as well as cheese and cherry cake.

The wine selection was very good and we had a West Cape Howe Porongurup 2018 Riesling. Very nice drop.

During the flight, quite an array of food options was on offer such as mozzarella and caramelized red onion calzone or a bacon sarnie with Stokes Brown Sauce.

Our flight was now over the Black Sea and we tracked over Turkey, Iraq, Persian Gulf, UAE, Oman, Arabian Sea before crossing into the Indian Ocean.

I found sleep difficult because of my height so caught up on some great British crime series like Line of Duty, that saw the time flash by.

Breakfast was served about 2.5 hours out from Perth with a good selection of options on offer.

True to his word the captain and his crew had us in Perth a fraction ahead of schedule with a touch down at 11.49am. Elapsed time was 16 hours 18 minutes.

All in all, a great flight, despite the lack of sleep.

But is it worth it? Now that is the question.

For a return flight on November 14 ex Perth and returning on November 28 the fare in premium economy on Qantas is $6,311. (Fare online Sept 15).

On Singapore Airlines in a mixed class of economy ex Perth on an A350 or 787 and premium economy ex Singapore on an A380 the return fare is $3,313. But you can treat yourself and upgrade to business class on the way home for just an extra $1,500 making a total fare of $4,813.

Mind you these are November fares, which are typically lower than normal.

Elapsed time for the outbound legs is around 22 hours.

You be the judge!