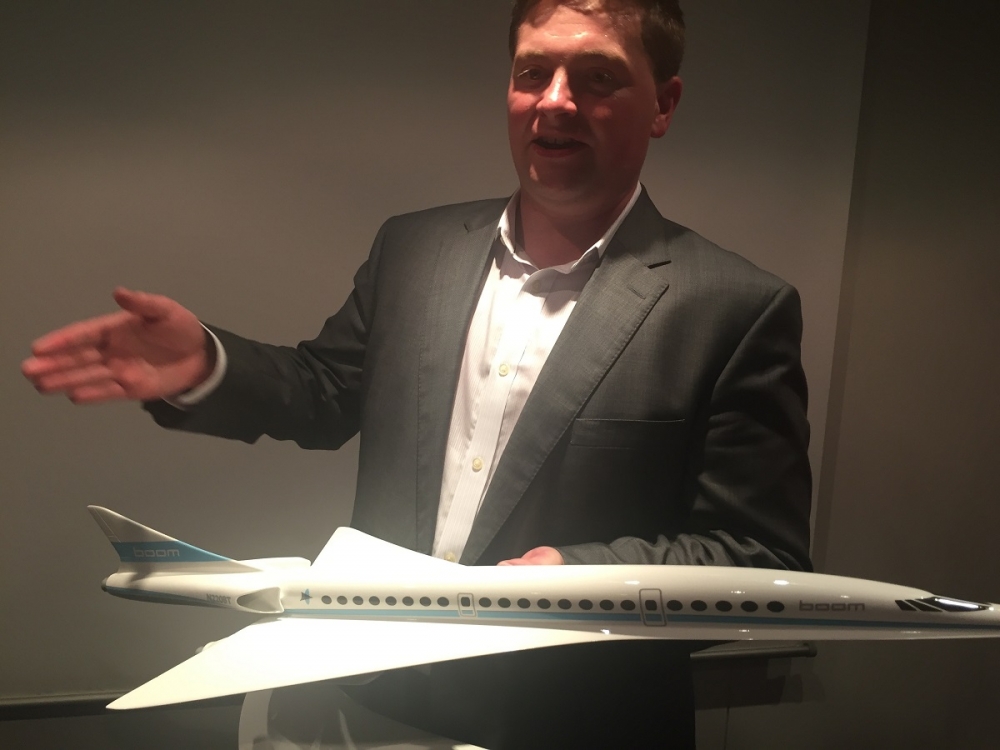 The airport of Le Bourget in Paris is something like holy ground for supersonic air travel.

In 1969, during the aerospace fair then called Aerosalon, Concorde was presented on a world stage for the first time, shortly after its first flight.

In 1973, the supersonic race between West and East culminated in tragedy when the Soviet Union’s supersonic airliner, the Tupolev Tu-144, crashed after a demonstration flight from Le Bourget near the suburb of Goussainville, killing all six on board and eight on the ground.

Decades later, in 2003, an Air France Concorde landed during the air show one last time.

Today, it is exhibited alongside a prototype in the Concorde hangar at the Air and Space Museum at Le Bourget airport and this past week was the venue for an aerospace career exhibit with a flying car project displayed rather fittingly underneath its delta wings.

And then there was the appearance of a young man from Denver, Colorado, in a cramped conference room in the basement below the exhibition halls.

It was here that Blake Scholl declared: “There is a supersonic revival, the speed of travel changes the way we live”.

Scholl is the founder and chief executive of start-up Boom and he promises to expedite passengers at Mach 2.2 over the Atlantic again — and probably across the Pacific —from 2023.

Although there has been much discussion among scientists and the aerospace community about a successor to Concorde since it stopped flying in 2023, nothing concrete had emerged. The challenges to mitigate the sonic boom, make the engine noise bearable and get the economics to add up seemed insurmountable.

But then Scholl, 36, formerly working for Amazon and a pilot himself, gets on stage to announce: “We now have reservations for 76 aircraft by five major world airlines, they are not just letters of intent, but backed by tens of millions of dollars in non-refundable down payments.”

Scholl says the launch partner is Virgin Atlantic, something that is no surprise given Sir Richard Branson’s longstanding interest in supersonic travel.

Branson provides synergies for Boom to utilize some facilities and expertise from  Virgin Galactic and Virgin Atlantic. He has also signed up for the first ten aircraft of the Boom Passenger Airliner, as it is currently called.

With a length of 51.8m (170ft) and a wingspan of 18.2m, the new aircraft is significantly smaller than Concorde (length 62m, span 25.5m). It will seat 55 passengers in a standard business class cabin in a 1+1 seat layout per row versus  2+2 in Concorde. Alternatively, it can seat 45 in a mixed cabin with 15 seats with a 75-inch seat pitch in a first class section.

The catalogue price for the aircraft is $US200m with entry into service planned for 2023.

But even Scholl admits that is not an easy project, adding that “scepticism is totally OK”.

And while acknowledging Concorde, Scholl is keen to distance Boom from it.

““We will be dramatically more mainstream than Concorde,’’ he says. “Being a smaller aircraft it will be more viable. We are starting at business class fares for transatlantic returns from $US5,000, and prices will go down as more aircraft get deployed.”

Nor is this some far-fetched project but one that is concrete with $US41m in acquired funding.

The end of 2018 will see the first flight of the smaller two-seater XB-1 demonstrator aircraft, dubbed “Baby Boom”, which will be the world’s fastest civil aircraft at Mach 2.2 or 2,235 km/h.

“We now have everything required to build the first independently developed supersonic aircraft – the funding, technical design and manufacturing partners,” Scholl assures AirlineRatings.

Even though Boom assumes that the ban on supersonic flights over land will remain in place for the foreseeable future and the aircraft will be able to fly faster than sound over water only, he sees 500 viable oceanic routes for supersonic travel.

This will see the trip from London to New York take 3:15 hours (instead of seven), the flight from San Francisco to Tokyo completed in 5:24 hours (versus 11 hours subsonic) and Los Angeles – Sydney flown in 6:45 hours instead of 15.

The long transpacific routes will include a refuelling stop, as the unrefuelled range of the aircraft is 4,500nm (8,334 km), just short of the 5,100nm from California to Japan.

Advancements in materials and testing will make the new supersonic aircraft much easier and quicker to develop than Concorde.

“Carbon fibre is a huge enabler for supersonic aircraft,’’ explains Scholl, “It means we can have much bigger windows and despite the friction heat at supersonic speeds the aircraft only grows about 2.5cm in flight, not 30cm as Concorde, made of aluminium (did).

“We employ the same technology as subsonic aircraft, with the engines being the same kind of established turbojets used in cruise missiles.’’

While the Boom airliner will be 10 per cent faster than Concorde, it will carry passengers at fares 75 per cent lower and be 30 per cent quieter.

Asked if “Boom” is really a good name for a project having to deal with a sonic boom and noise, Blake insists: “I love the name, ‘boom and you are there’. And the sonic boom issue is really overblown.”

Surprisingly, even Boeing’s VP product development, Mike Sinnett, referred to the Seattle manufacturer’s research on the next SST (supersonic transport) during a presentation about future projects in Le Bourget.

“We are working on an SST with lower boom technology, it’s exciting work but still very challenging, as it is difficult environmentally and as a business case,” acknowledged Sinnett.

“We will see it sooner than in 20 years’ time, but it might not be us doing it in this time period,’’ he said.

One thing Boom and Boeing have in common is that they both clearly have signalled  “a revival of interest in an SST.”