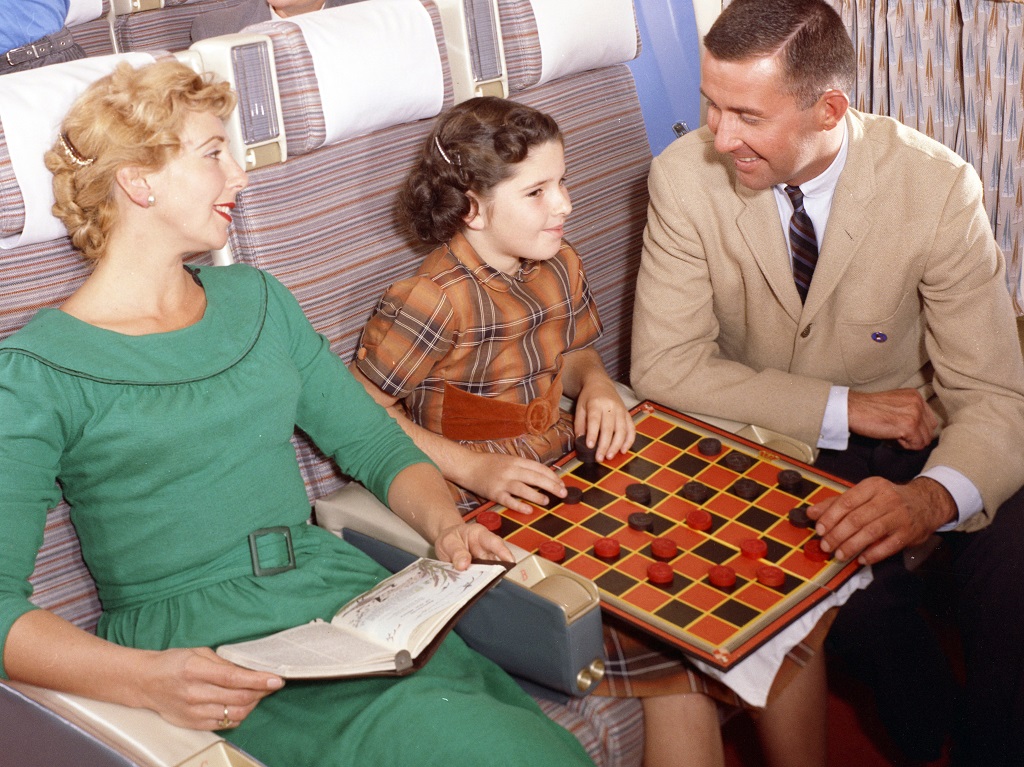 How we used to pass the time on long flights in the “golden age of flying” before seatback videos is very different to today.

During the 1950s and 60s in-flight entertainment or “IFE” as we know it today was in its infancy and rudimentary.

And flying in the 1950s was much slower and far more turbulent, while the initial jet services were mostly multi-stop affairs because of their shorter range and to pick up passengers.

So, let’s take a peek back through the archives to reveal what travelers did to amuse themselves on those long flights in the 1950s and 60s.

The most popular form of entertainment was, of course, reading – a good thriller, a romance or just catching up with the news in a newspaper, because don’t forget there was no internet, FB or twitter via WiFi.

When you weren’t reading, mealtime was a grand affair even in economy.

For those in First Class, the meal was preceded by drinks in the downstairs lounge if you were on the Boeing Stratocrusier.

Dinner was a multi-course affair served more often by stewards in a white coat and back tie no less – and at your table.

After dinner or lunch, you might retire again to the lounge and meet the captain who would do the rounds. It was great PR to calm nervous flyers for passengers to chat with a multi-striped veteran who had experience etched in his rugged good looks.

For those in economy perhaps a game of drafts with mum and dad.

Playing cards was also popular and airlines would issue them with logos, or pictures of planes or destinations that they flew.

When you weren’t playing cards you could use them to build a house. This was a popular PR shot to illustrate how smooth jet travel was compared to the piston-engine aircraft they replaced.

Flight crew were always on the lookout for junior flyers and would explain the route the aircraft was taking.

Millions of young flyers signed up for the various Junior Flyers clubs which came with logbooks of their travels and pilots would oblige and fill in the details of the flight.

Another way to illustrate how smooth jet travel was compared to the piston-engine era was to balance matches.

Afternoon tea was a grand affair with full silver service with a collection of sweets and pastries that would tempt even the most resilient weight watcher.

Many business people traveled with staff to take notes and type letters on the journey.

Ladies would take their knitting on flights but today knitting needles are banned.

While other mothers would read to their children.