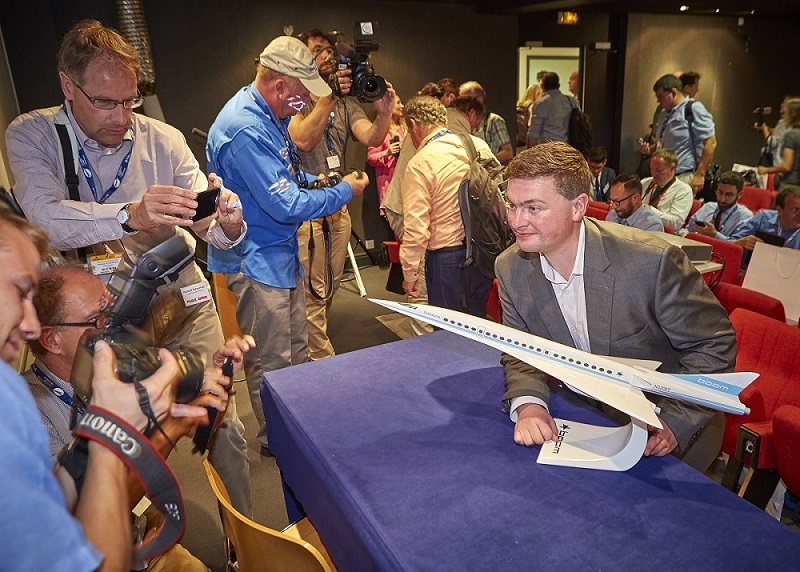 Blake Scholl, 36, former Amazon manager and internet entrepreneur, is the founder and CEO of Boom Supersonic, a start-up from Denver/Colorado.

Boom is aiming at bringing to market the first supersonic passenger airliner since Concorde, with entry into service planned from 2023. In  2018, a two-seater demonstrator aircraft dubbed “Baby Boom” is supposed to fly.

At the Paris Air Show,  Boom revealed that currently 76 of the 55-seat production-type jets have been reserved by five undisclosed major airlines with substantial, non-refundable down payments. Andreas Spaeth exclusively talked to Scholl recently.

AirlineRatings: How did you get hooked on supersonic travel, without ever having flown on Concorde?

Blake Scholl: It started in 2007 when I was working at an internet start-up in Seattle.  One day my girlfriend was stuck on one of these slow, hopelessly delayed flights, and when I was waiting for her I thought: ‘What happened to Concorde and supersonic flight?’.  But there was no credible effort to build a supersonic aircraft I could see myself flying on. There was just some Science Fiction stuff. Or maybe a private jet for billionaires – I said well, that’s not for me. I thought: Could I start a company to build a supersonic jet? I thought the answer would be ‘No’. I started to look at it more seriously three years ago, I thought I would do two weeks of research and get the whole idea out of my system.

Q: But you obviously didn’t, why not?

Scholl: The more I learned the more I realized that we actually can do it. It’s hard but it’s possible, as in fact we already have all the key technology we need. Relative to Concorde, we have had 50 years of progress in how we build aircraft. We’ve got better ways of optimized aerodynamics, we have new materials like carbon-fibre composites, we have significantly quieter and more efficient engines. If you take all these things together you can build a new-generation supersonic airplane that costs 75% less to fly than Concorde. And once we realized that we said: Either we have no courage, or we want to start this company and do it.

Q: Boom is deliberately clinging on to existing technology rather than going into the unknown. So how do you actually exploit the progress made since Concorde?

Scholl: We use state of the art technology, the same that is on the latest subsonic airplanes. Aerodynamics, materials and propulsion are the three big categories. From an aerodynamics perspective, it used to be you had to design an airplane in a wind tunnel. It takes about six months, meaning you can’t do very many tests and can’t touch many designs. Today’s computer simulations, in contrast, are really good, you can do all your optimization in the computer, meaning you can do six months of work in half an hour. And you can test thousands of more design ideas than you could before, which means you can find better ones and you end up with a refined aerodynamic shape of the airplane, with more lift and less drag. New materials mean you can come up with a very complex shape of the airplane, it turns out the way you want it to, it’s hard to find a straight line on our aircraft. With composites, you mould the parts into any shape you want them.

Q: For the engines you stick with fairly known technology, at least with your demonstrator ‘Baby Boom’, why?

Scholl: Yes, the production aircraft will use the same turbofan technology that’s in an Airbus or Boeing aircraft. ‘Baby Boom’ will use a small old engine, because that’s what fits the airplane. We know it’s going to work with the turbofans for supersonic, the engine manufacturers have done the work on their side, and they know it’s working, too. Basically, you take three existing wide-body engines to power a much smaller airplane, so you’ve got a lot more thrust. The way you adapt the engines themselves is: For subsonic, you want these great big fans at the front. It turns out for supersonic, however, you want a medium size, a much smaller fan. You need a compromise about being quiet at the airport and being fuel efficient at high speed. But it’s the same technology as on other aircraft, you just adapt it. Basically, you just change the fan size, which is a straightforward thing to do, the same technology that’s flying today, you are adapting it for high speed. We haven’t chosen an engine supplier yet, as we are talking with everybody.

Q: What about engine noise and also about the sonic boom a supersonic aircraft inevitably produce?

Scholl: The engine noise at the airport will be 30 times quieter than Concorde, which was really loud. And we don’t use afterburners on take-off, which is a big factor. And on the sonic boom side, it is also quieter by a factor of 30 versus Concorde, so the Boom passenger airliner will be 30 times quieter both at the airport and with the sonic boom it causes.

Q: Serious scientists argue that the speed of Mach 2.2 you are aiming at, 10% faster than Concorde, is unrealistic. Is it?

Scholl: The opposite, I think the lower speeds aimed for by other projects are actually the problem. The point of supersonic is not to save you an hour here and there. That would be great, but it wouldn’t be transformative. The power of supersonic is when you change where you can go, when you can save entire days off of a trip. The most important travel route around the world for business today is New York to London. If you catch the first flight of the day from New York, going to London, and you travel at Mach 1.5, you’ll get to London after everyone has already closed up shop. Then you still lose the day. With Mach 2.2, you make it there in time for an afternoon meeting, even including ground transportation. That’s really important. If you look at an airline schedule about what trips passengers can take, Mach 1.5 isn’t good enough in most cases. You have to go at least Mach 2. And my belief is that 50 years after Concorde, we need to be faster, not slower. There is a huge need to fly this fast, the other proposed lower-speed concepts will run into some real challenges when you look what you can actually do with them.

Q: Critics say your aircraft will be too big to be viable. True?

Scholl: I rather think it’ll be too small. This works on hundreds of routes that have enough premium traffic for it. We’ve already announced 76 aircraft reserved by five airlines, and this is just scratching the surface, this is going to be a huge market. We are on track to hit this 1,300 sales forecast just for our Boom aircraft alone over ten years. This is supported by a third-party analysis made by the Boyd Group. And I think there is a good chance we’ll beat that. History shows that when flights get faster, people travel more often. It happened when jets replaced propeller aircraft, traffic grew like six-fold. When you can get from London to New York in 3:15 hours instead of seven hours, a lot more people will go. Which means you will see a big increase in demand. So in light of that, this aircraft might be way too small.

Q: What do you expect to be your first supersonic flight as a passenger to be like?

Scholl: It’s gonna be awesome, I can’t wait to see the curvature of the earth for myself from 60,000 feet through our big windows. It’s going to open the eyes of the world to a faster future.