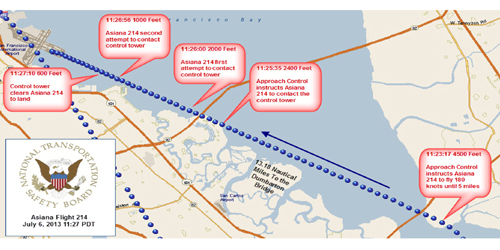 The US crash investigator the National Transportation Safety Board has given the Asiana Boeing 777-200ER that crashed on Saturday July 6th at San Francisco International Airport, killing three and injuring over 100, a clean bill of health noting all systems including auto pilot, auto throttle and flight director were working perfectly.

The NTSB also noted that the pilots were having trouble lining up for the landing on runway 28L. The airport’s Instrument Landing System, which gives an electronic guide to pilots, was not available but the visual Precision Approach Path Indicator was.

The pilots were instructor check captain, Lee Jung Min (49) who was assisting captain Lee Kang Kook, (46) who was being endorsed on the 777. Both captains were experienced. A third pilot – a co-pilot – was sitting in the observer seat.

According to the NTSB the 777’s speed decayed from a target speed of 137knots (253km/hour) to 103 knots (191km/hr) which went unnoticed till nine seconds before impact.

“There is no mention of speed until about nine seconds before impact,” said Mrs Hersman.

Captain Lee Jung Min earlier told the NTSB that he assumed that the auto throttle –similar to cruise control in a car – was maintaining the required speed of 137knots.

However Mrs Hersman told media that “they [the pilots] are required to monitor their instruments during landing – particularly the speed.”

Pilots work as team with one flying the plane the other supporting with read backs on critical data, setting flaps, lowering undercarriage and reading checklists.

Mrs Hersman said that two different members of the cockpit crew – the instructor captain and the observer co-pilot – made separate calls to abort the landing, three seconds and 1.5 seconds before the crash. Power was applied but it was too late.

The pilot flying also reported being blinded by a flash of light on approach however the source of the light and its role in the crash are not known the NTSB said.

Mrs Hersman also clarified the evacuation and noted that the cabin crew had sought guidance from the pilots but they initially, unaware of the fire, told flight attendants not to initiate evacuation procedures.

Only when the flight attendants told them of the fire was the order given to evacuate.

“We don’t know what the pilots were thinking, though I can tell you in previous accidents there have been crews that don’t evacuate, they wait for other vehicles to come to be able to get the passengers out safely,” said Mrs Hersman.

However once the call was made the passengers were out within 90 seconds.