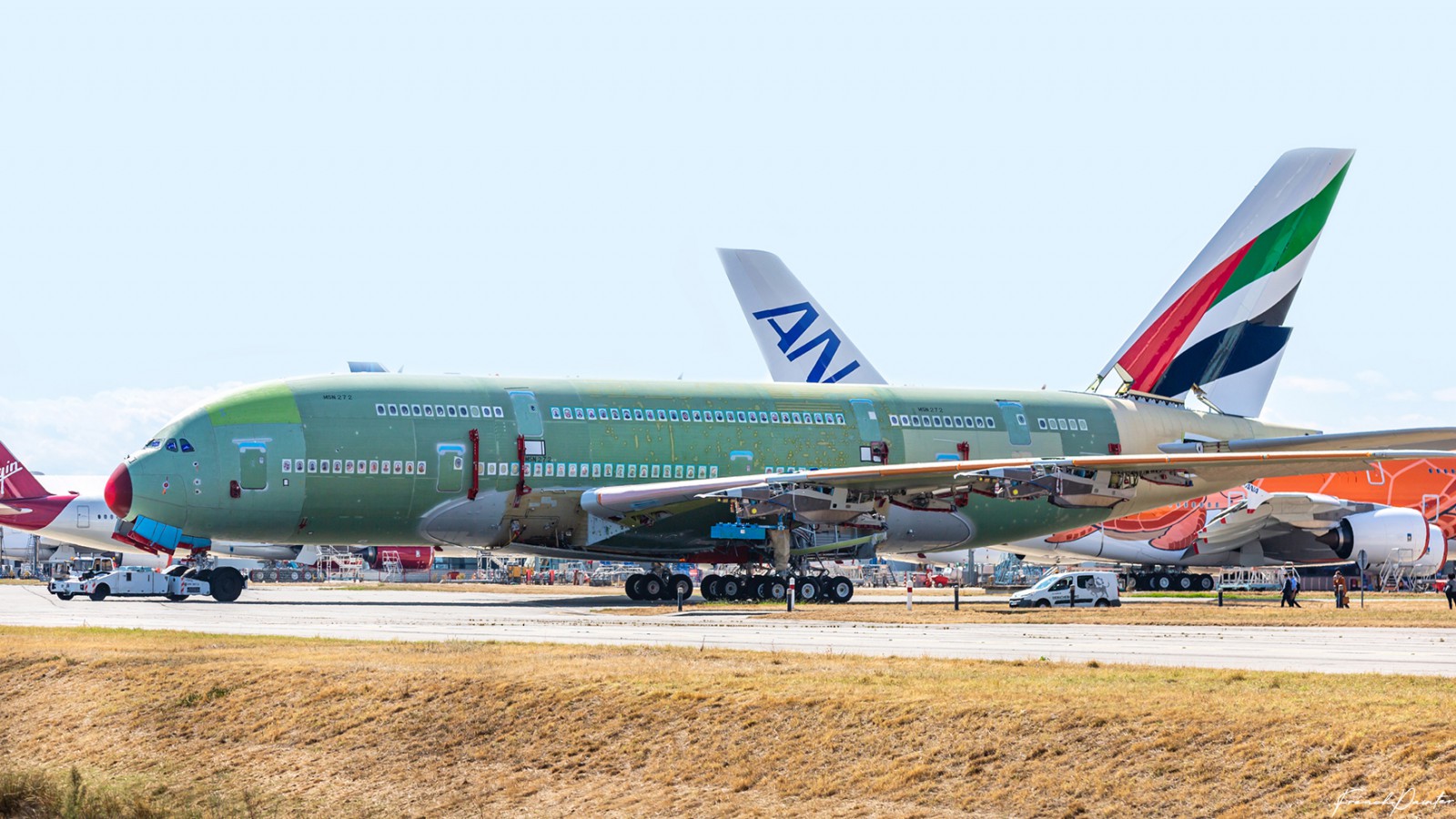 The very last Airbus A380 superjumbo has left the production hall in Toulouse to have its engines fitted.

Ship 272 is destined for Emirates, the largest user of the giant jet.

The superjumbo was photographed by freelance photographer Aviation Toulouse at the Jean-Luc Lagardere plant, a purpose-built Airbus facility at Toulouse-Blagnac Airport in southern France.

Airbus announced the end of production in February last year with Emirates taking just 14 more and swapping its remaining commitments for 40 A330-900 aircraft, and 30 A350-900 aircraft in a deal worth US$ 21.4 billion at list prices.

Airbus and Emirates reached an agreement on outstanding A380 deliveries taking the airline’s total A380s to 123 units.

At the time His Highness Sheikh Ahmed bin Saeed Al Maktoum, Chairman and Chief Executive, Emirates Airline and Group, said: “After many months of discussions, we have come to an agreement with Airbus and Rolls-Royce.

“Emirates has been a staunch supporter of the A380 since its very inception. While we are disappointed to have to give up our order, and sad that the programme could not be sustained, we accept that this is the reality of the situation. For us, the A380 is a wonderful aircraft loved by our customers and our crew. It is a differentiator for Emirates. We have shown how people can truly fly better on the A380, and Emirates has set the standards for that by introducing customer experiences that are unique to the A380 like our Shower Spas and Onboard Lounge.’

Airbus said at the time:

Following a review of its operations, and in light of developments in aircraft and engine technologies, Emirates is reducing its order book from 162 to 123 aircraft. Emirates will take delivery of 14 over the next two years. As a consequence and given the lack of order backlog with other airlines, Airbus will cease deliveries of the A380  in 2021.

Emirates has also decided to continue growing with Airbus’ newest generation, flexible widebody aircraft, ordering 40 A330-900 and 30 A350-900 aircraft.

“As a result of this decision, we have no substantial backlog and hence no basis to sustain production, despite all our sales efforts with other airlines in recent years. This leads to the end of A380 deliveries in 2021,” said then Airbus Chief Executive Officer Tom Enders.

Since that decision, many airlines have grounded their superjumbos due to COVID-19 and also declared that the giant jet beloved by passengers will not fly again.