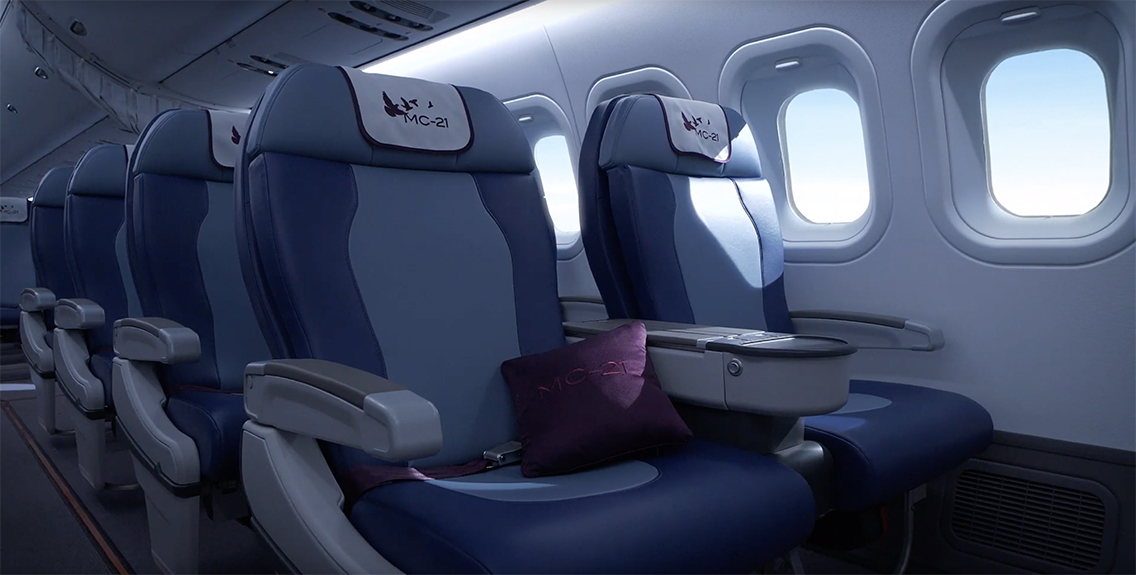 Delving inside the “A320ski”, Russia’s Irkut MC-21 takes one back to the Tupolev Tu-204 from thirty years ago in the late 1980s. It was nicknamed the 757ski, and you may be getting your Shirley Bassey on with some history repeating with the Irkut MC-21, the Tu-204’s successor aircraft.

The MC-21 in Russian, stands for magistralniy samalyot, or “mainline airliner”, which the linguistically oriented will note means that it is actually the “MS-21” in its Russian equivalent since the S sound in the Latin alphabet is represented by the Cyrillic letter that looks like the Latin C.

In the great history of the 757ski and the Tu-144 “Concordski”, the MC-21 received its own nickname from wags: the A320ski. This small twinjet is aimed at exactly the larger end of the small airliner market that the A320 family and its A320neo successor is targetting, and is indeed offering one of the same engine option in the Pratt & Whitney geared turbofan PW1000G family, alongside homegrown Aviadvigatel powerplant options.

Indeed, the MC-21 comes in a bit bigger than the Airbus narrowbody’s fuselage. A cabin width of 3.81m within a fuselage of 4.06m compares with the A320 family’s 3.70m cabin width and 3.95m fuselage width. It’s interesting to note that both airframers therefore specify 25cm of sidewall space, or 12.5cm on either side of the cabin.

What that means for the passenger experience is an opportunity for pleasantly wide seats: that 11cm difference means almost two centimetres per person additional room compared with an Airbus A320.

Translating into the imperial measurements that are frustratingly still standard within the industry, across the six economy seats that means the MC-21’s seats could be approaching 19” wide, which is almost an inch wider than the A320 and almost two more than a 737.

In business, that means the two seats on either side of the aisle each get a couple of inches more width.

That’s comfort you can take to the proverbial bank — but only if you have a supply chain willing to create a new wider generation of seats for these aircraft. Seats, too, are a very complex enterprise, as all the many delays to new aircraft and production of existing aircraft with new seats have shown. Without that, all you have is a really wide aisle and possibly some extra space on the window side of the seat rows, depending on how the MC-21’s seat track supports are located.

All in all, though, finding a seat maker to add width to a product that’s already certified shouldn’t be too hard given the number of smaller seat makers out there. It may not be the most elegant or most space-efficient in terms of pitch, but it should do the job.

But what’s on the outside matters too. Remember what Virgin Blue’s CEO Brett Godfrey said back in 2003 about the 737-800 vs the A320, one of which had sweeping, modern-looking winglets versus the less elegant wingtip fences? And don’t forget rule 17 from Clarence “Kelly” Johnson of Lockheed’s famous Skunk Works: “If it looks ugly, it will fly the same”.

The front end feels a little snubby, and not in the way that the A320’s nose is cute-snubby. Part of that may be from the flight deck windows, which give it the look of someone peering through ill-fitting glasses perched on the end of a nose too small for the frame design.

The tail looks too big for the airframe like an A330 vertical stabiliser was put through the washing machine on too high a heat. The wing is skimpy, feels a little too far forward, and is reminiscent of an A310 — but, crucially, without any kind of modern aerodynamic device on the end of it, whether winglet or raked wingtip.

It all just looks and feels a bit 1980s, and this stuff matters.

As is often true in aviation — and equally important in Russia — the context is important to understand. The MC-21 is manufactured by Irkut and was designed by Irkut subsidiary Yakovlev. All are part of the overarching Russian public-private airframer United Aircraft Corporation, and UAC has not been shy about reorganising its various component parts.

Designing, building, manufacturing and industrialising a modern airliner is one of the most complex and difficult enterprises humanity has yet achieved. In the same way that a substantial aim of the Mitsubishi SpaceJet, né Regional Jet, is to develop homegrown modern jet airliner production in Japan, and the Comac C919 and ARJ21 in China, the MC-21 is intended to do the same in Russia.

Indeed, it also aims stubbily towards the future of the Sino-Russian CRAIC consortium to create the C919 widebody — the A350ski, anyone?