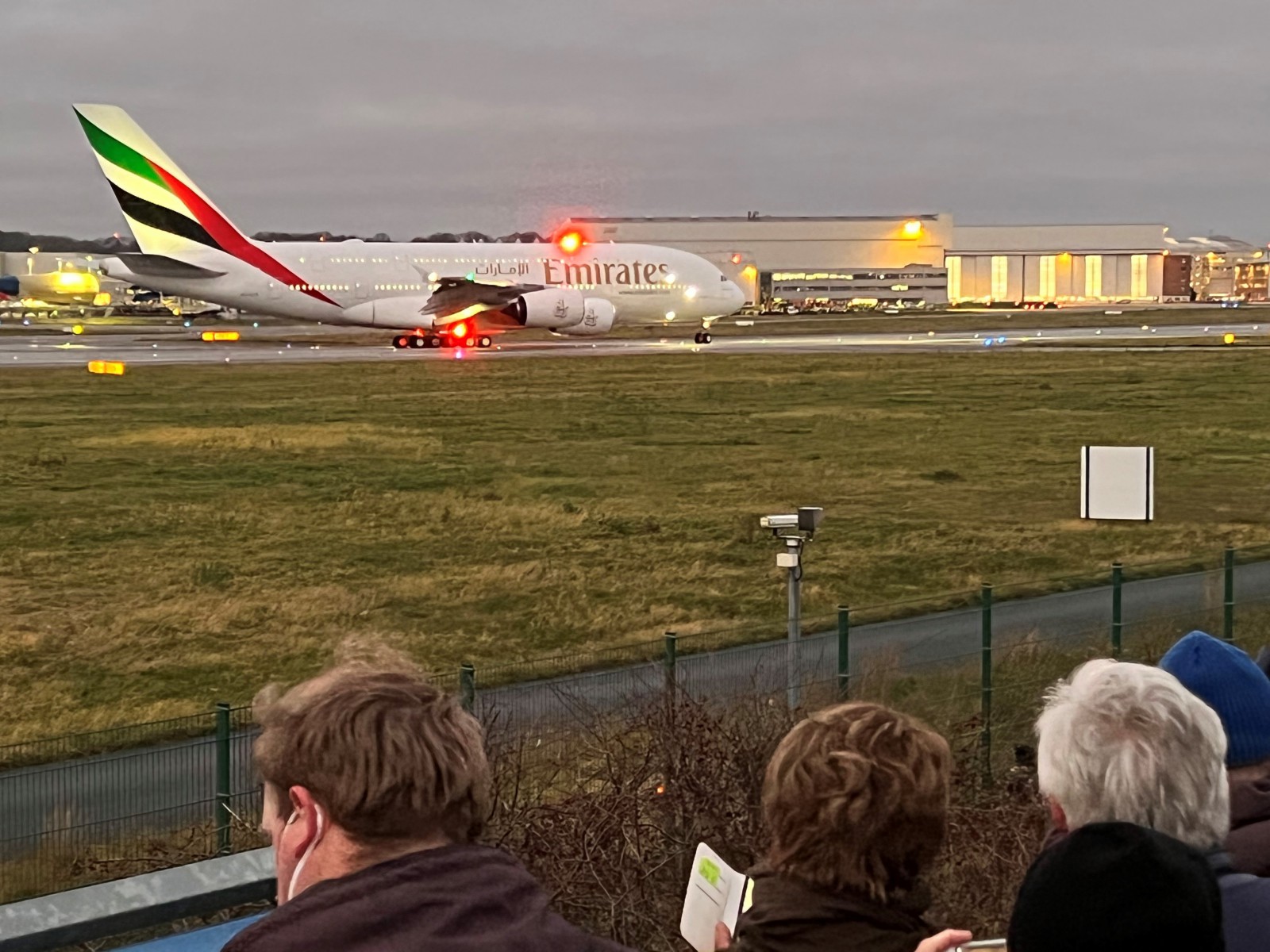 The last delivery of the A380 was to have been a big event – at least Emirates wanted it that way.

“This thing has got real life and legs for us, this is not a funeral, just the last of these great airplanes,” Emirates’ President Sir Tim Clark had recently told Airlineratings.com.

Sir Tim was referring to the end of the A380 production and its last delivery, still hoping for an honorable way for the aircraft to bow out of production.

On Thursday afternoon at 16.41 CET, the last aircraft MSN272, the 251st delivered to an airline, and the 123rd transferred to core customer Emirates rotated on the runway of the Airbus factory at Hamburg-Finkenwerder, Germany, on its way to its new home Dubai.

The aircraft was empty besides the crew, no speeches, guests of honor, champagne, ribbons cut, just the picture below.

Airbus was not keen to celebrate this milestone of a program that turned out to be a huge economical flop.

The high Covid-19 incidences in Germany came in handy to prevent any event or even take media to Dubai as Sir Tim had planned.

“So honored to bring her home,” Captain Dwayne Walker, Chief Pilot for the A380 fleet at Emirates, had told the author the same morning via LinkedIn before piloting the last delivery.

After take-off he brought the last A380 back over Finkenwerder to a cheering crowd, many of them active or retired Airbus workers, to perform an almost-touch-and-go and low pass to honor the aircraft and its maker in the very last evening light on an unusually mellow winter day with the moon rising above the factory.

The ultimate aircraft closing production and joining Emirates, registered A6-EVS, will probably have an unusually short life, sharing the fate of many other A380s, some of them already being scrapped after less than ten years of operations.

Still, the A380 has a big pulling power for both passengers and enthusiasts alike. Arun Rajagopal, who used to work in the Emirates’ social media team for eight years and since left the company, came privately all the way from Dubai to Hamburg for one night as an enthusiast just to witness the last A380 delivery take off.

“I just had to see this, the A380 is absolutely unique,” he told Airlineratings.com

Sonja Schweicker, a young Airbus engineer, said that many people at the manufacturer are sad the A380 era is ending. “It’s a very special moment today when the last A380, for all of us our favorite aircraft, leaves the factory,” she said.

On a day when he’d rather have been present in Hamburg and onboard the flight himself but had to stay back home as everybody else, Sir Tim told Airlineratings.com in an exclusive statement on Thursday:

“The A380 is one of the most popular aircraft ever built and its legacy will live on in the folklore of aviation history. Having said that, I remain convinced that in the fullness of time and with the benefit of rapidly advancing technologies in aerospace, there will be a place for a new, environmentally friendly aircraft of this size. How else will the predicted future demand for air travel be dealt with, given the already maxed out hubs in the world today?”.

“The A380 is a truly special aircraft in so many ways. For Emirates, it gave us the opportunity to redefine the travel experience, efficiently serve demand at slot-constrained airports, and bolster our network growth. The A380 will remain Emirates’ flagship product for the coming years, and a vital pillar of our network plans.

“The aircraft we are receiving today features our latest cabin products including Premium Economy. Compare it to our very first A380 delivered back in 2008 and you’ll see the myriad of enhancements and upgrades invested in ensuring that the Emirates A380 experience is unparalleled. We’d like to thank Airbus and all of our program partners for enabling us to push the envelope to introduce many innovative ‘industry firsts’, and importantly, deliver the best product for Emirates’ customers.”

“The A380 has touched the lives of so many passengers by setting new standards in terms of flying and travel experience. I’m confident that it will continue to do so for decades to come with Emirates, which has continuously introduced new services and products allowing passengers around the world to experience the unique features of their A380s.

“On behalf of all Airbus teams, I would like to use this delivery milestone to warmly thank Emirates Airline – the biggest A380 operator in the world – for their unwavering trust and partnership. Here’s to many more happy landings!”

At the 2021 Dubai Airshow in November, Emirates also announced a major retrofit program which will see 52 of its existing A380 aircraft fitted with Premium Economy cabins and other enhancements, highlighting the airline’s ongoing commitment to ensuring its A380 experience remains best-in-sky.