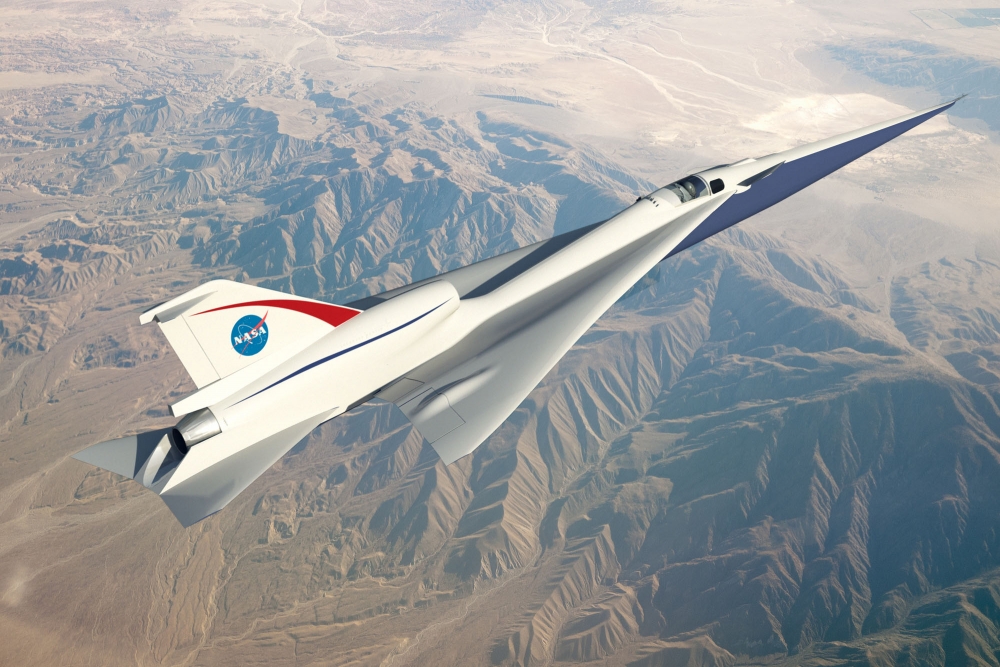 Following Concorde’s entry into service in 1976, the supersonic jet’s top speed of Mach 2.04  (1,354 mph), enabled passengers to cross the Atlantic Ocean in half the time it had once taken.

This was until 2003, however, when economic and safety pressures forced the supersonic jet into retirement.

A true beauty of the skies, Concorde’s retirement not only signalled the end of commercial supersonic flight but also the first time in aviation history that the progress towards ever faster speeds had gone into reverse.

After over a decade of subsonic commercial flight, there is hope once again for jetsetters across the globe as NASA, in conjunction with Lockheed Martin and General Electric, is in the process of developing quiet supersonic technology.

Known as QueSST, the technology is designed to reduce the deafening impact of a sonic boom to a muted thump, clearing the way for environmentally acceptable supersonic transport aircraft and, potentially, the birth of a new golden age of high speed travel.

To realize this goal, NASA has contracted Lockheed Martin and General Electric to develop a preliminary design of a supersonic aircraft capable of proving to regulatory agencies that low level sonic booms are acceptable to people on the ground.

The shaping of the 94 foot long, delta-winged aircraft is designed to create a sonic boom which would be audible as a soft rumble as opposed to a sharp crack. As Peter Iosifidis, Lockheed Martin Program Manager, explains, the QueSST demonstrator design (pictured at top right) attempts to “separate the shocks so that they don’t ever coalesce”.

By distributing these waves across the length of the aircraft, the shock waves cannot become focused and instead, hit the ground intermittently, creating the soft rumble NASA is aiming for.

Powered by a single General Electric F404 fighter engine, the specially designed demonstrator is expected to fly in late 2019 and will begin sonic boom experiments in 2020.

The plan is for the aircraft to participate in a series of over-flight trials around 2022-2023 over four to six communities around the US. The results of these trails will be used to determine once and for all if the 1973 ban on supersonic overland travel can be overturned, potentially opening the door to follow-on commercial developments both domestically and internationally.

Then the NASA demonstrated the “thump” using an F/A-18 which only reached a level of 77 decibels, just 2 above their target of 75 at which they hope the International Civil Aviation Organisation will confirm to be acceptable to the public.

The simulated low boom was achieved through a dive manoeuvre in which the F/A-18 accelerates to Mach 1.1 at an arranged altitude and distance from the targeted epicenter of the sound shockwave.

Listen to the much quieter thump (sonic boom) here:

This monumental effort originates from a 1973 FAA and ICAO regulation prohibiting any flight that creates a sonic boom over land.  As overland flight is imperative to the economic feasibility of supersonic operations, the entire market hinges on ICAO mandating a sonic boom decibel level that they deem acceptable to the public. This, in turn, is contingent on the success of NASA’s QueSST effort and its attempt to prove the technical viability of a low boom design based on principles that can be applied to aircraft ranging in size from a Mach 1.4 business jet to a 120-seat supersonic airliner.

Should commercial supersonic flight overland become acceptable, NASA forecasts a demand for over 500 civil supersonic airliners in addition to between 350 and 500 business jets. The advent of long awaited high speed transport will almost certainly revolutionize international passenger travel as well as the flying experience. With airlines desperate to gain a competitive edge on their rivals, the availability of a supersonic commercial aircraft would set a new standard for the premium commercial flight experience.

While much of NASA’s effort stems from a desire to maintain American leadership in global civil aviation, NASA’s Dave Richwire, Commercial Supersonic Technologies Sub-Project Manager, admits, “We have got to engage the international community because if this aircraft is going to be successful it has to operate around the world.”

Amongst the international research community the Japanese Aerospace Exploration Agency (JAXA) continues to pursue ambitious plans for a high speed trans-Pacific airliner while in Europe the nearer term focus remains on development of a new generation of supersonic business jets.

It is also clear that supersonic transport will have to travel at high altitude for both operational and air traffic reasons. These aircraft will be travelling almost twice as fast as subsonic airliners and to avoid congestion in the lower levels of controlled airspace will be allocated to virtually traffic free zones at 50,000 feet or higher.  As Ed Haering, NASA’s Aerospace Engineer and Sonic Boom specialist said, “It’s the fast lane!”.