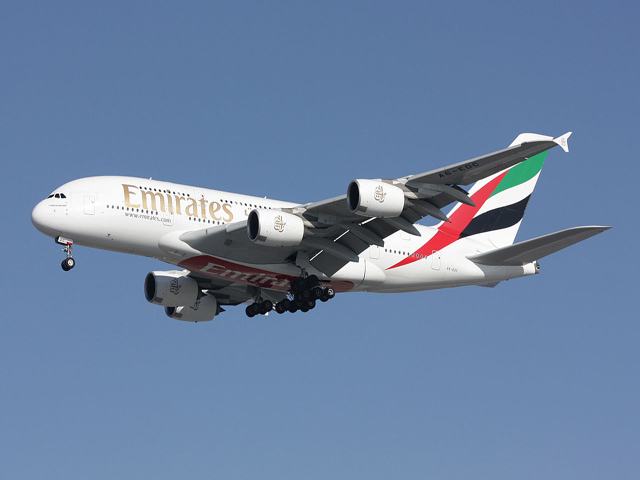 Emirates superjumbos and complimentary hygiene kits are on the travel checklist as the world’s airlines get back into the air.

Around the globe, airlines are dusting off aircraft, pilots are in simulators doing refresher courses while network planers are weaving flightpaths around restricted zones.

Emirates chief Sir Tim Clark, who as a five-year-old tied palm fronds to his arms to see if he could fly, promises that his massive fleet of A380 super jumbos will be back.

SEE Video of stunning vapor trails from Thai A380.

Discounting rumors that the A380 superjumbo is dead Mr. Clark told the FT.com this week “we’re not getting rid of any of them. The A380 has a place in the Emirates international network on the scale it has before.”

“Albeit not today or fully next year, but the year after I think there will be a place for it and I think it is going to be extremely popular.”

But what Emirates is rolling out this month are 16 more destinations to be flown by its 777s and all passengers get a health kit comprising of masks, gloves, antibacterial wipes, and hand sanitizer.

This is on top of a full sanitization of the aircraft each night.

With this latest announcement, Emirates is offering flights for passengers on the back of its scheduled cargo operations from Dubai to 29 cities, including existing flights to London Heathrow, Frankfurt, Paris, Milan, Madrid, Chicago, Toronto, Sydney, Melbourne and Manila.

Many of these flights are underpinned by mainly perishable cargo, being carried in the belly of the aircraft.

There is no question the world is opening up with Dubai, Singapore, Abu Dhabi and Hong Kong re-joining Doha as transit airports.

Qatar Airways’ home Doha has remained open as transit airport and the airline has carried almost 2 million – mainly repatriated – passengers over the past three months.

June is shaping up as the start of the airline network rebuild according to the world’s leading source of airline schedules OAG.

However, confusion around lockdowns and quarantine requirements continue to frustrate airline network planners around the globe as they try and make sense of bridges between countries, corridors, and too many dead ends OAG says.

The world’s leading schedule resource says that “the industry remains in a state of confusion much of it created by others but will work through the consistent lack of clarity.”

OAG says that airline capacity is about 30 percent of the levels offered this time last year.

It says that China remains by far the largest country market accounting for almost 40 percent of all global capacity.

Last week Qantas announced a gradual lift from the current 5 percent of the network operating to 40 percent by the end of July.

New Zealand is opening up as well with Air New Zealand moving to resume 40 percent of its domestic flying.

But the so-called Tasman Bubble between Australia and New Zealand remains elusive with New Zealand suggesting it will be September before that concept will work.

For those taking to the air, the experience will be very different, with spacing, temperature checks, masks, and even gloves the norm.

Requirements will vary from airline to airline and country to country while standards are agreed.

Airlines in the main are also making changes and re-booking simple to ease passenger concerns about changes.

However, seat spacing will not be possible as the fares would need to increase 40 percent to guarantee a free seat next to each passenger and nine times if the 2-meter rule was to be enforced.