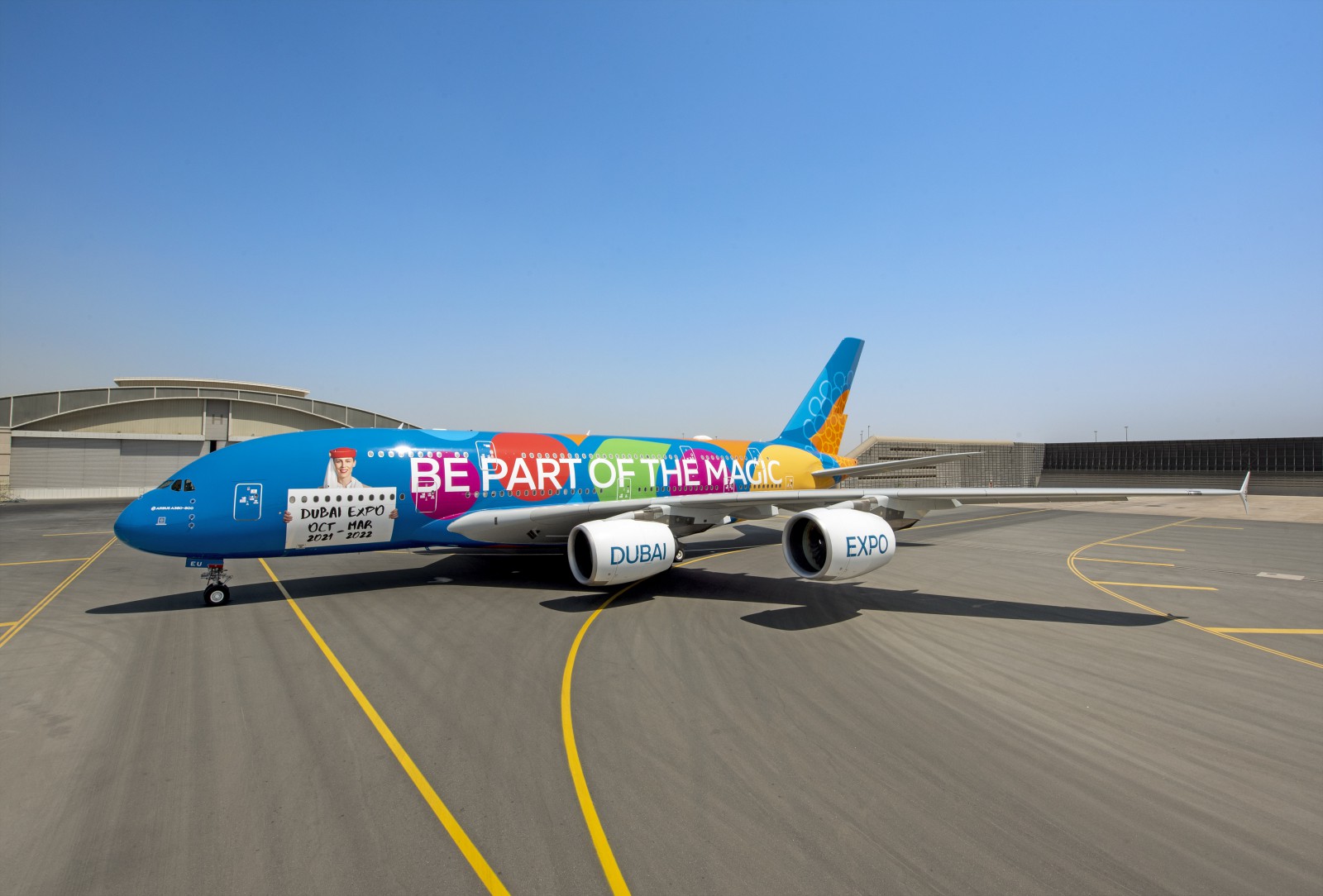 Emirates, the Premier Partner and Official Airline of Expo 2020 Dubai, has revealed a head-turning A380 livery dedicated to further carrying the global event’s messages worldwide.

A radical departure from the airline’s traditional white and gold paint scheme, this bright blue aircraft livery features large-scale graphics in vivid green, orange, pink, purple, and red, which run across the fuselage and all the way up to the tail and fin interlaced with the distinct ring-shaped Expo 2020 Dubai logo.

‘Dubai Expo’ and ‘Be Part of the Magic’ messages run across both sides of the A380 fuselage. The engine cowls also carry the Expo 2020 Dubai messages and dates of the event.

In addition, the amazing Burj Khalifa stuntwoman who appeared in the recent viral Emirates ad carries an invitation to visit the event on both sides of the aircraft, holding a message board that says: ‘See you there’ and ‘Dubai Expo Oct-Mar 2022’.

The new A380 livery was designed, painted, produced, and installed in-house and the livery was not just a decal, but a complete paint project, and is by far the largest one the airline has ever embarked on.

The paint on A6EEU, the aircraft chosen for the livery, was completely stripped. After that, eleven colors were applied to the aircraft. A ‘wild spray method’, electrostatic spray guns, and conventional cup guns were used to put on the different colors, using over 2,500 sqm of tracing and masking material. All of the stencils and tracing guides were produced in-house by the airline’s UV printer and graphics workshop and took numerous hours to fabricate and complete. T

Decals were then applied on the engine cowls and, as well as the image of the Emirates Cabin crew holding the message boards adjacent to the aircraft’s exits.

The process of painting the livery design and applying the decals took 16 days and 4,379 man-hours to complete.

The new Expo 2020 Dubai livery will appear on three Emirates A380 aircraft.

Expo 2020 Dubai is the first World Expo ever hosted in the Middle East, Africa, and South Asia (MEASA) region, and will run from October 2021 to March 2022.