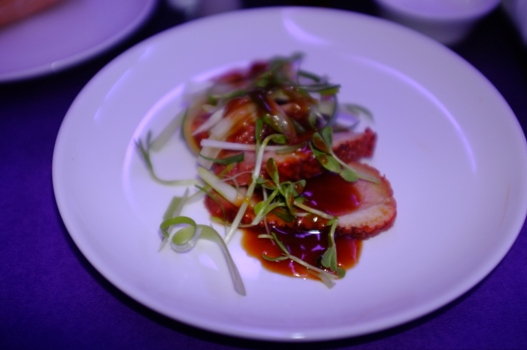 One probably doesn’t need the cheese course on a Virgin flight. The airline’s internationally renowned song and dance man, Richard Branson, is all the cheese you’d ever need. Unkind? Probably. But Branson is no stranger to the cheesy photo op or the cleverly pitched stunt. And, of course, it works. It has positioned Virgin as the freestyle outsider, the fun lovin’ alternative to the stuffy legacy carriers.

In Australia, this posture – pitched at the yoof – has been usurped somewhat by budget tyro JetStar with it’s perky TV ads and toothy models plucked from the ranks of its flight attendants.

And while Virgin hasn’t dumped its youthful tear-away image altogether, It is now a serious player in the business class market in Australia and it has had to, well, grow up. It’s doing a cracker job too. There’s still a bit of yoof culture about it, especially in the design of its major airport business loungers, but as Aussie business flyers discovered when they took advantage of the airline’s matching platinum-for-platinum, gold-for-gold frequent flyer promotion in 2012, this is one hell of an airline.

Culture in any organisation is important and it’s clear (as a first time Virgin business traveller) that the service culture at Virgin is superb. The staff are smiley and chatty and genuinely personable and yet they never cross the “too familiar – get out of my space” line. Nor do they have the vacant look and fixed smile of the ‘professional’ steward who delivers flawless service, but forgets the most important part – a genuine, welcoming attitude.

The Virgin business cabin is a nice place to be.

Its pod seating too is best in class and a real winner for Perth-Sydney/Melbourne/Brisbane travellers, particularly on red eye flights.

So, what about that cheese course. Well, it’s good too, although on a menu specifically designed for Perth flights you’d expect a West Australian cheese to be on the card – the stunning Ringwould Dairy goats cheeses would be an obvious choice. Instead we get a three cheese list with two from the same producer in Gippsland and the other a supermarket cheese from KingIsland in Tassie. There’s nothing wrong with any of them, but, where’s the imagination?

Irish Australia larrikin chef Luke Mangan is the face of the food and he seems a good fit for Virgin. He’s a TV personality, man about town, cookbook author and knockabout bloke with a gleam in the eye and a cute turn of phrase. His menu on A330 flights is an extensive book’ titled “Chef’s Selections” specifically designed for what Virgin calls its “Coast to Coast” services.

From the starters list a beautifully plated Peking duck dish with spring onion and hoi sin riffed off the classic Beijing duck in a pancake, capturing the big, bold hoi sin flavours while not swamping the glazed duck slices. The crew have obviously been to plating-up school: the dish was perfectly presented completed with snipped micro herbs. Big flavour.

From the mains list, blue eye trevalla with steamed potatoes was the kind of well cooked, but ultimately uncomplicated dish one just loves to eat on a plane. Again, plating-up skills were superb. A plinth of perfectly cubed steamed spuds had been laid with care on the plate on top of which the trevalla – moist, hot, well-seasoned – had been set. It was topped with a punchy roasted capsicum sauce, adding yet more bold flavour to the construction.

We’re talking airline here. Had this dish been plated up in a restaurant on the ground, would we be raving quite so much. Arguably not, but it is one of the best executed dishes, I’ve eaten in the sky for quite some time (The best by the way is Neil Perry’s eight course degustation in the first cabin on the A380 service Sydney to Los Angeles – which I’ll review in upcoming editions).

The chocolate lava cake was a fail. It was acidic from too much bi-carb and just, well, ordinary.

The drawcard in this cabin is the wine list. One isn’t just offered wines from a trolley. An entire wine list is proffered along with the menu at the beginning of food service and it is lavish in scope (for an airline cabin that is) and with its tasting notes and explanations. It may sound all a bit wine-buffy, but in fact the list is more useful to non-wine buffs than experts. It gives them time to think about what they want to drink, so when the steward comes round for orders, it’s a simple conversation rather than the entire explanation for each passenger. Good move. And classy too.

But for those who like an aperitif before lunch, the inclusion of Campari on the liqueurs and spirits list is about as perfect as it gets.

One of the best.