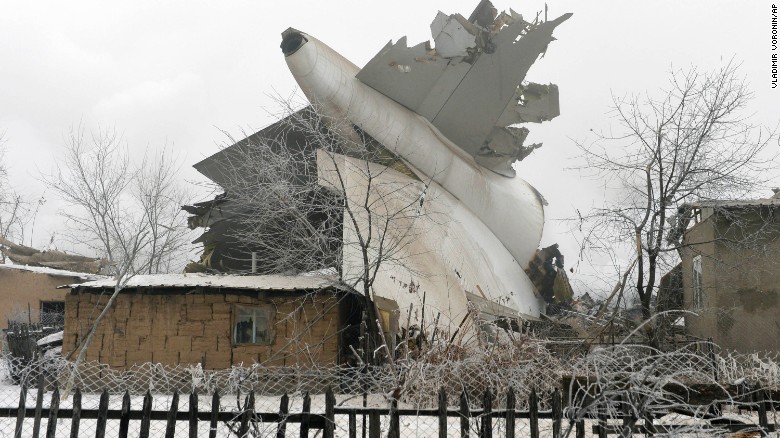 Officials in Kyrgyzstan are already pointing the finger at the crew of a Turkish Boeing 747-400  freighter that slammed into a village while trying to land in wintry conditions on Monday, killing 37  people and destroying at least 15 houses.

But the company which operated the flight, MyCargo Airlines,  cautioned there was still no clear or confirmed information about the crash.

The freighter was on a run from Hong Kong to the  Kyrgyz capital of Bishkek.

A state-run news agency said preliminary information had prompted Kyrgyz Deputy Prime Minister Muhammetkaly Abulgaziev to conclude that "crew error" had led to the crash at the village of Dacha-Suu,  near Bishkek's Manas Airport.

The Aviation Herald said the plane, being operated by MyCargo for Turkish Airlines as flight TK-6491, was on final approach to Bishkek's runway when it attempted a go-around but failed to climb to safety.

Initial reports said all four crew and 28 people on the ground had died but CNN later quoted Kyrgyzstan's emergency situations ministry as saying there were 37 fatalities and at least 15 houses destroyed.

Images of the scene showed wreckage towering above ruined buildings.

ACT Airlines, which operates as MyCargo,  confirmed the deaths of its four crew members and said there was no clear and confirmed information about the cause of the accident. It also cited 33 civilian deaths.

The company it said it had commissioned two pilots to investigate the tragedy and was sending technical staff to site to help in the investigation by Kyrgyz and Turkish authorities.

It said there had been no problems reported during the flight and the crew had rested for 69 hours in Hong Kong before the six-hour flight carrying 85,618kg of general cargo.

There were no faults in the technical log of the freighter, which was manufactured in 2003 and joined the company in late 2015, and maintenance had been carried out “in a timely manner and according to the aviation standards”.

“According to the first findings, it is understood that the reason of the related accident is not caused by technical reasons or loading related factors,’’ the company said. “The actual reason of the accident will be shared with the public after the inspection of aircraft and the place where the accident happened.’’