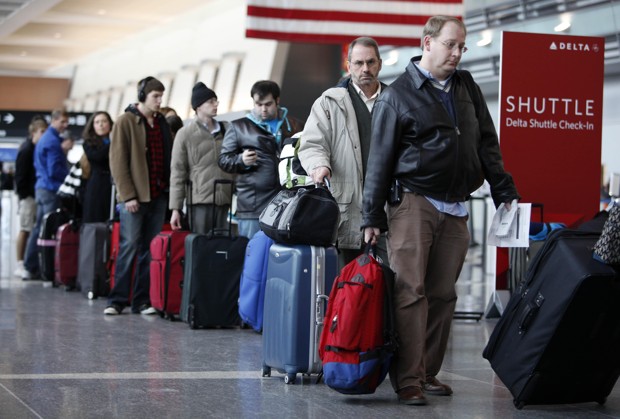 One of the world’s top authorities on airline pricing has predicted that paying for carry-on baggage will become standard practice in the next three years as airlines cash in on the popularity of optional fees.

Jay Sorensen, chief executive of US-based consultancy IdeaWorksCompany that tracks the growth of airline ancillary revenue, says there will be an international escalation in baggage fees following the decision of all three big US full-service airlines to introduce Basic Economy – effectively a new class of travel designed to compete with ultra-low-cost carriers.

American Airlines last week fell into line with Delta and United in offering a Basic Economy product which, for American and United at least, excludes the use of overhead lockers without a baggage fee and limits fee-free carry-on items to those that will fit under the passenger’s seat.
Delta, which pioneered Basic Economy in 2012, still allows one full-size carry-on bag fee-free. America’s biggest domestic airline, Southwest, is now alone in offering two free checked bags and two free carry-on bags to differentiate itself from its competitors – even though it is a low-cost carrier.

IdeaWorksCompany.com reported in November 2016 that global airline ancillary fees for items like baggage were estimated to have grown 13.8 per cent last year to $US67.4 billion – more than nine per cent of the world airline industry’s total revenue.
The company sees no pause in the growth of optional fees because they’re popular with consumers in return for cheap headline air fares.
“I’ve said for years that the revenue generated by baggage fees is just too attractive for airlines to ignore and gradually that it will become the law of the land or the standard procedure for airlines to charge bag fees – where they’re legally permitted,” Sorensen told AirlineRatings.com this week.
“There are some countries where they are not – Brazil and Turkey are countries where bag fees are not permitted for domestic travel. But I think elsewhere in the world we’re going to see them become very popular because of the revenue potential.”

Sorensen says airline fare pricing adopted in America quickly becomes the global standard.
“When you have three major players – United, Delta and American – introduce seat-only fares, it can create havoc with the global alliances to have policies which are outside of the norm,” Sorensen says. “And so what I have found is that the practice by the US majors quickly becomes the standard practice across the  (global) alliances over the course of time.”

Basic Economy customers at American and United are now required to pay $US25 for a full-size carry-on bag stored in the overhead locker, plus a further $25 gate handling fee if the bag is checked in on the way to the plane.
It’s unlikely there will be any reduction in current best fares for passengers buying Basic Economy – just the introduction of new fees for bulky carry-on items.
At the same time, concessions that allow fee-free cabin baggage are now being made for frequent flyers using Basic Economy at all three US full-service carriers.

Opinion was divided among airline industry analysts about whether fees for hand luggage would take off when they were introduced by so-called ultra-low-cost carriers, like American’s Spirit and Frontier airlines, over the past five years.
But, Sorensen says, the adoption of hand baggage fees worldwide – even among full-service carriers — will be rapid because they have been so successful. He says the popular press regularly has articles railing against baggage fees, but calls by US politicians to ban them are “laughable and insulting”.
“This method of pricing has been pioneered by airlines such as Frontier, Spirit, easyJet, Ryanair and Norwegian – airlines that have grown by leaps and bounds ahead of airlines that use traditional methods of pricing,” he says.
“You need only to look at the load factors (seats filled per flight) on these airlines to realise it’s a commercial success. If people truly hated this, these airlines would not be posting the giant traffic numbers they have been posting for many years.
“The fact of the matter is these fares are popular with consumers. Lots of consumers buy them because they are cheap. What we have here is a pricing method that reflects mass-market appeal.”

The dividend for airlines and travellers alike is that charging for hand luggage speeds up loading and unloading of aircraft and benefits on-time performance.
“I have flown on Spirit and on the flight that I took there were only 13 people who paid for large carry-on bags. In my 30-plus years in the airline industry, I’ve never seen a plane load so quickly,” Sorensen says.
“And it did so with a minimum of fuss. In terms of an uncongested airplane environment, it was wonderful.”