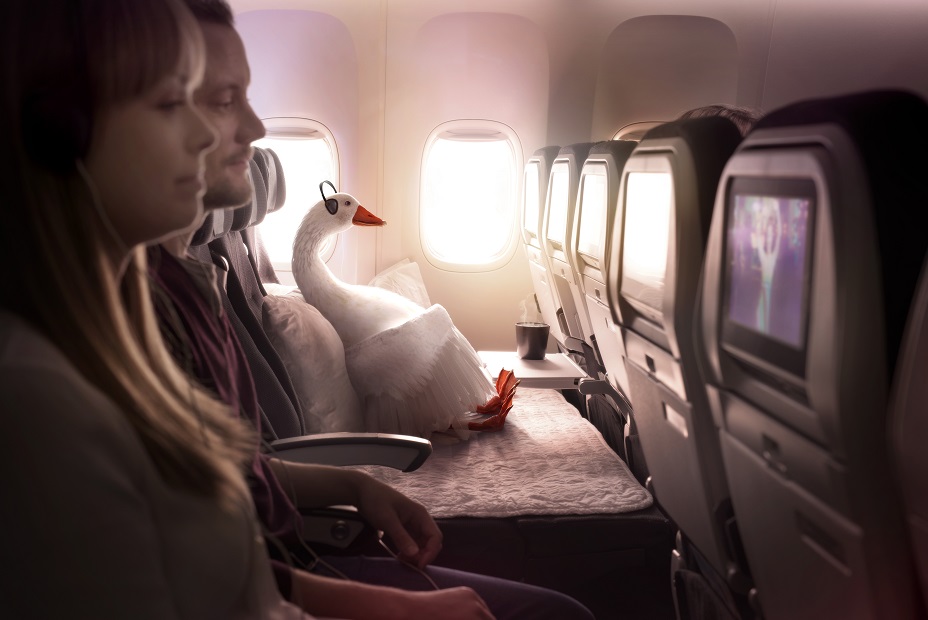 A  goose called Dave will spearhead a renewed push by Air New Zealand to capture a bigger slice of Australia’s long-haul market.

The computer-generated migratory bird, voiced by Hollywood star Byran Brown, is part of multi-million-dollar campaign  which has seen the Kiwi carrier employ 21 salespeople in Australia and set up marketing offices in Australian states to sell its Auckland hub as gateway to North and South America.

The airline has tailored television advertisements featuring Dave to each of the Australian states as part of a marketing blitz aimed at getting its message across.

It has backed its Better Way To Fly  campaign with limited time return economy sale fares from Sydney to Los Angeles and San Francisco from $A999, Houston from $A1099 and Buenos Aires from $A1199. It is also offering a 50 percent discount on its economy class Skycouch,

In the ads, Dave gives  up migrating under his own power for the comfort of flying AirNZ to one of its overseas destinations. The ad is designed to emphasise the airline’s award-winning service while driving a better understanding in Australia of its range of destinations.

“What’s the one person that doesn’t need to fly?’’ Brown said at the launch of the campaign in Sydney on Thursday. “A bird. So if a bird’s flying Air New Zealand it’s got to be good.’’

AirNZ chief executive Christopher Luxon said that even before the launch of a  TV and online campaign on Sunday, Australians made up 40 per cent of passengers to the Argentinian capital of Buenos Aries and 20 per cent of those travelling to Houston in the US.

The airline has already been targeting markets such as Perth and Adelaide but faces a tougher sell on Australia's east coast where Australian and US carrier offer non-stop flights to the US.

However, Luxon was confident the airline would be able to compete with the non-stop services, noting it was was easier to make a connection in Auckland to go to a city such as Houston than to fly to the US and change to a domestic carrier.

“I think when you add it all up, Australians are going to realise it’s pretty good value for money – what they get and what they spend,’’ he said.

The AirNZ boss said more than a quarter of all international long haul departures from Australia were  bound for the US, South America or Canada.

“Capturing just a little bit more of that market would see hundreds of thousands more Aussies flying with us to North and South America,’’ he said. “We’re well established as the preferred airline for Australians travelling to New Zealand and one of Australia’s most respected brands1, however, many Australian travellers still think of us as a trans-Tasman carrier and that’s a perception we’re determined to change.’’

AirNZ also wanted to capitalise on a “tidal wave of demand’’ that was heading to Australasia from regions such as Asia and the Americas, he said.

Air New Zealand has been a pioneer in innovative marketing and has gained global recognition for its themed safety messages such as those featuring Lord of the Rings and Men in Black characters.

“Through CGI technology and the familiar voice of Bryan Brown, Dave bursts into life as Air New Zealand’s number one fan when it comes to flying to North or South America,’’ he said.