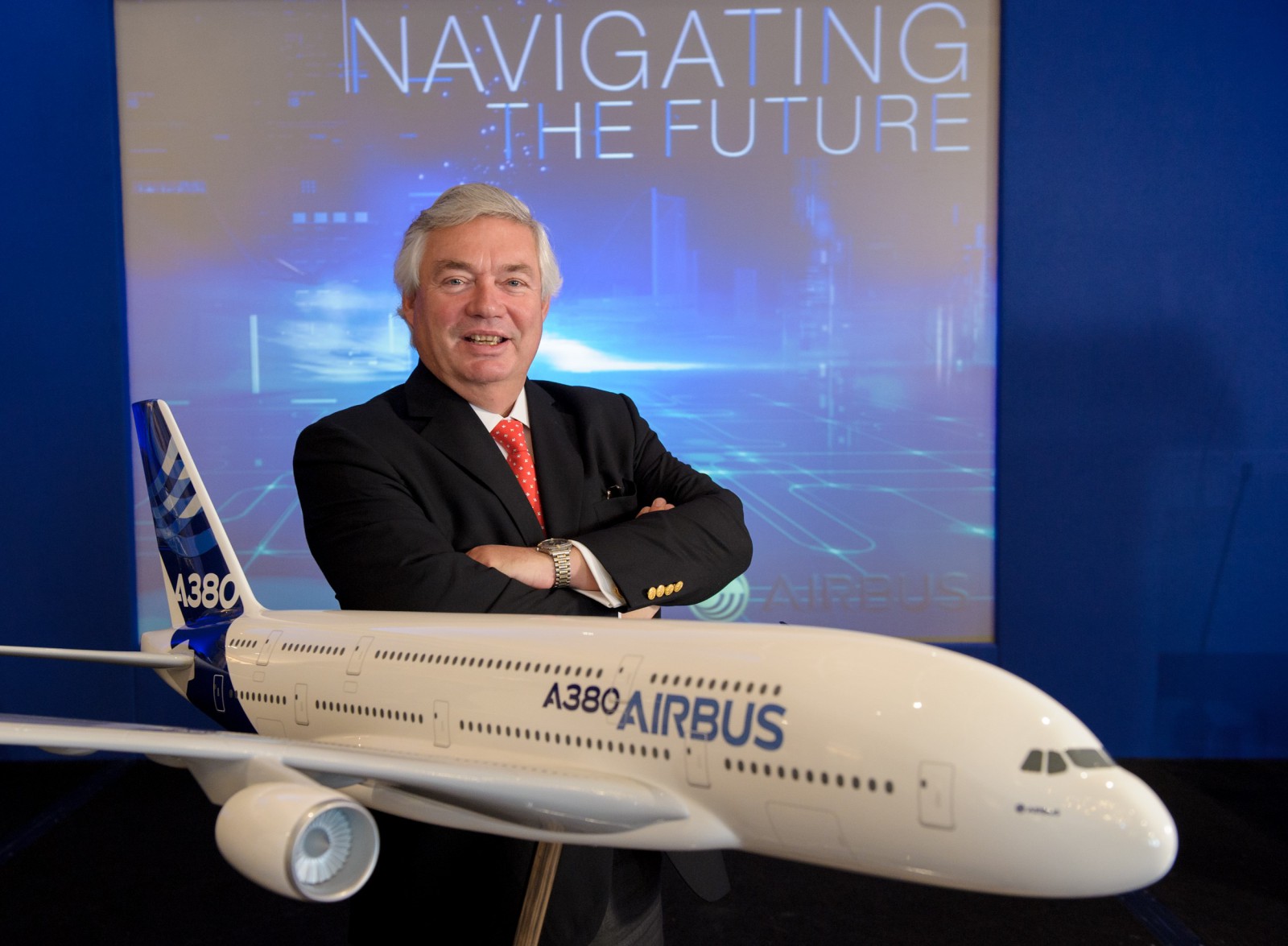 Airbus supersalesman John Leahy has broken his silence to speak out about the failure of the A380 superjumbo that passengers love. In a two-part series, Mr. Leahy speaks exclusively to Airlineratings.com

John Leahy, in retirement since early 2018, is an aviation legend and seen as the ultimate aircraft salesman.

Leahy, now 70, led a sales team that sold over 15,000 aircraft in his career, “after cancellations”, as he recently revealed in an exclusive interview with Airlineratings.com.

Hailing from New York, a former flight instructor with almost 4,000 hours under his belt, Leahy launched his sales career with the European planemaker in 1985 at Airbus North America.

He was tasked with prying open the US market for Airbus, which was entirely locked out of it at the time, and Leahy delivered. In 1994, he moved to Airbus’ Toulouse headquarters and became the charismatic head of the Airbus sales force.

READ: In the COVID-19 world there is more danger en route to the airport.

He remained in this role until the end of 2017 and saw five different Airbus CEOs during his time and seven counterparts of his at Boeing. It was his ambition that won Airbus over 50 per cent market share regularly from 1999.

The A380, the world’s biggest passenger aircraft, was a model particularly close to Leahy’s heart. He even postponed his retirement, planned for the end of 2017, to personally secure a crucial follow-up order with Emirates and thus the ongoing production of the A380.

It came to fruition only in early 2018, before it unraveled after he went into retirement, with the A380 seeing its last new ones delivered to Emirates at some time in 2021.

John Leahy today lives in Miami, Florida. In this exclusive interview with Airlineratings.com, Leahy talks for the first time about the failure of the A380 program.

Are you bored now, not having any constant suspense anymore?

John Leahy: I am keeping myself busy over here in retirement, but Airbus is going through a quieter period right now with all the airlines hunkering down, not doing much.

Are you feeling you left Airbus at the right time before the pandemic disaster hit the industry?

A lot of people say that, but I think it’s just the opposite. I like a challenge, I enjoy sorting things out. After 9/11 it was fun to get through 2008 to 2010, helping the airlines when they were in distress due to SARS out of China and the financial crisis. For me, a challenge is more interesting than just a day-to-day normal activity.

How big a challenge was the A380 in your entire career?

The A380 was certainly a big challenge from a commercial point of view. Airlines interfered with the design. Singapore Airlines said they wouldn’t sign on if the A380 wouldn’t be meeting London’s QC2 noise standard. That meant extra weight with the re-designs that were necessary. Too much weight was built into the airplane, which was a design-philosophic mistake that is, thinking we would do a stretched A380-900. We should have put in a structure that was needed now. They also put in extra weight because they wanted a freighter. But the optimal freighters are the ones that don’t have any extra weight. That was clearly a design-mistake that we have made. I was talking to Qantas in 1999, and they finally said they needed guarantees the A380 would get from Sydney to Los Angeles, while, for example, Emirates didn’t need as much performance from the aircraft initially. It was only later they discovered they also needed more range and payload. We were getting pushed back and forth by different airlines. At least the airlines know how to compromise back and forth. In 2000, we ultimately started listening to the customers.

When did the problems with the A380 start to emerge?

Where I believe we got into serious trouble was when we were blindsided by the engine manufacturers. They were assuring us that the specific fuel consumption was that of new generation engines, and it would be ten years before there was the next leap to a substantial improvement. We launched in 2000, but three years later we got the 787 being launched with GENx engines and Rolls-Royce matching that, having a ten to 12 per cent better specific fuel consumption than the A380’s engines. Can you imagine the success of the A380 if it had 12 per cent better fuel burn than it actually had?

Would that have made the A380 a success then?

That would have solved all sorts of problems. With the long lead times new engines take, they had to know they were developing a new generation of engines for Boeing that was going to come out. All our engineers were blindsided. That’s why we stumbled around on the A350 in the very beginning when we had no idea they could do a 787 with a ten, twelve or even 15 per cent better fuel economy and a new series of engines being available. And that was all announced before we started flight-testing the A380.

Did you ever raise this point with the engine manufacturers later?

Yes, but they were all shuffling around about it. People said: “Well I wasn’t involved, we thought Boeing would do the Sonic Cruiser and that there’ll be a different engine, and then they decided to go subsonic with the 787 and we had this new series of engines.” They indeed had this new series of engines, and it wasn’t just GE, it was Rolls-Royce, too. So both competitors, on both sides of the Atlantic, had something in their back pocket that was ten, twelve or maybe 15 per cent better in fuel economy than the A380. That would have been game-changing, had we just waited two or three years and put that on the A380. If should have done a better job of prying out from the engine manufacturers what they had in their back pockets in terms of technology that would become available. We were saying at first that the airplane would be delivered in 2005, maybe that was also unrealistic.

When did you as the salesman believe a commercially successful A380 was possible?

I believed it was possible at the beginning, in 1999/2000. That’s why I was working with the airlines to launch it and I was getting good feedback. They liked the airplane. They knew the 747 was old and a new generation was coming, and they wanted to be on board with it. So yes, at the very beginning I thought we had it. When the 787 came out and their engines delivered the specific fuel consumption that they had, I was beginning to worry. And I was worried when they brought out the 747-8. Had we had those engines at that point in time, I knew that would have protected us from the big twins. As it was, the A380, even with the disadvantage of the engine technology, if you could fill it up to 85 or 95 per cent load factor, the big twins couldn’t compete with you. But that’s a pretty tight margin in a big airplane that’s getting harder to fill up. Had we had that better fuel burn, on a 65 or 70 per cent load factor you could have done very well with the A380.

This shortfall, together with the delayed entry into service right at the start of the world financial crisis in 2008, was the worst possible timing, no?

It was the perfect storm. Had we had it out in 2005 like we said we were going to or even had it been delivered with better fuel economy in 2007 with new generation engines, it would have been before the financial crisis. It would have had the momentum of building fleets up and getting things going. But as it was, airlines were building up fleets right during a financial crisis, when business travel was way down, hurting them financially. When financing was difficult, the brand new largest aircraft in the world made financing even more difficult. Yes, that extra two to three years delay in the program became deadly in itself. The lack of competitiveness with the engine fuel burn was also part of the perfect storm. And then of course the next thing it got hit with was the fuel prices that became very, very deadly. It all started lining up at the same time.

And then passengers didn’t want to fly via big hubs anymore, opposite to what you had always predicted…

People say more point-to-point was the way of the future. It became the way of the future as you could do it economically against the big airplanes like the A380 and Boeing 747 because now you had better fuel consumption. All in all, fuel prices hurt us, the engines manufacturers hurt us by giving us the wrong generation engine, and we committed suicide with not being able to technologically build the airplane we then had to redesign it and bring it out a couple of years later, right in the middle of the financial crisis.

Which role did the internal struggles at Airbus play in dooming the A380, which became apparent in a key phase of the project?

That played a key part in how screwed up it became. How can you manage a company as big and as sophisticated as Airbus, when you build wire harnesses that are just a few centimeters too short? You just don’t expect that from Boeing or Airbus. How could the Germans be sitting there in their own little world in Hamburg, the French in their walled city in Toulouse, and having clearly not talking to each other? How could you have gone right to the end of your design phase, having already manufactured these wiring harnesses, you’ve built the airplane, and now for the first time you are trying to connect them, and the workmen say: Hey, they don’t fit, guys? How could that happen? It was just dysfunctional.

Andreas Spaeth will be publishing a book looking back on the program titled “A380 – the last giant” (initially in German) in March 2021.