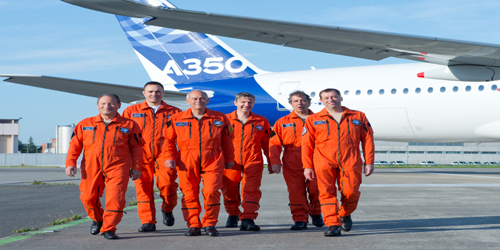 Like the 787 the twin-engine A350 is of all composite construction which enables the manufacturer to make significant improvements to passenger comfort.

Typically aircraft are pressurized to an altitude of 2800m which gives some passengers mild altitude sickness with impacts such as mild headaches.

However, because the 787 and A350 are made of composite structure which is stronger than aluminium the pressurization can be increased to the equivalent of a 2000m altitude removing the impact of altitude sickness.

And composite structure does not corrode so the humidity can be increased thus reducing the impact of dehydration.

There are three models with capacity between 270 in a three-class international configuration for the A350-800 to 550 in the largest model the -1000 with an all economy layout.

First deliveries will be to Qatar Airways in 2014.

An international crew of six was on board, comprising two Flight Test Pilots, one Test Flight Engineer and three Flight Test Engineers.

At the controls of the A350 XWB’s first flight are Peter Chandler, Airbus’ Chief Test Pilot, and Guy Magrin, Project Pilot for the A350 XWB.

Accompanying them in the cockpit is Pascal Verneau, the A350 XWB Project Test Flight Engineer.

At their flight test stations in the main aircraft cabin and monitoring the progress of the flight via an extensive array of flight test instrumentation are the three flight test engineers: Fernando Alonso, Head of Airbus Flight & Integration Test Centre; Patrick du Ché, Head of Development Flight Tests; and Emanuele Costanzo, lead Flight Test Engineer for the Trent XWB engine.

This first flight marks the beginning of a test campaign totaling around 2,500 flight hours with a fleet of five development aircraft.

The rigorous flight testing will lead to the certification of the A350-900 variant by the European EASA and US FAA airworthiness authorities, prior to entry into service in the second half of 2014 with first operator Qatar Airways.