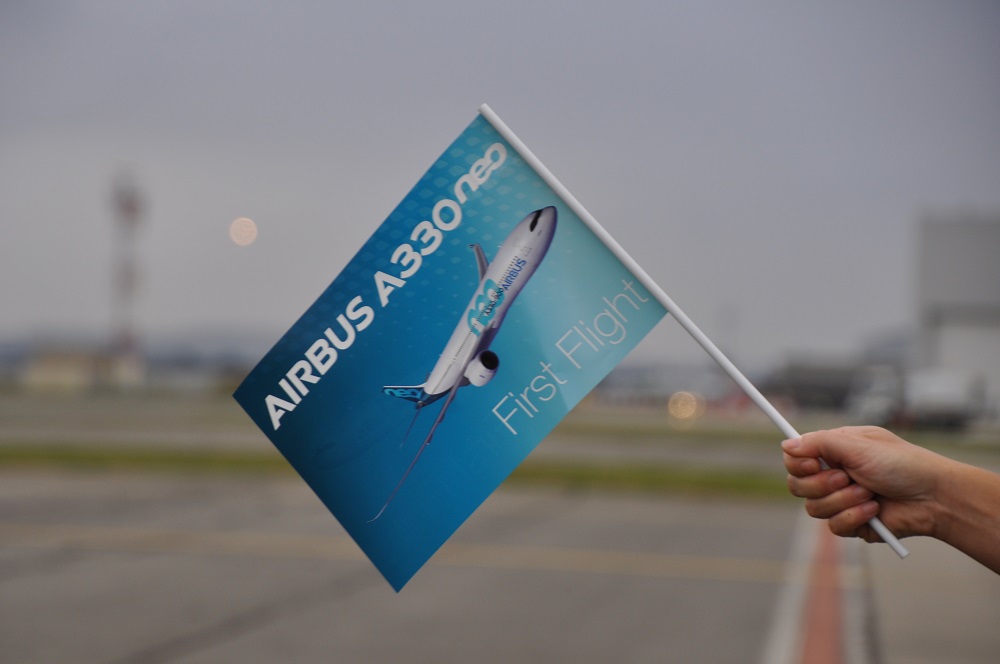 It was on 9.57am Thursday local time, three minutes early, that the first prototype of the Airbus A330neo took to the dark grey skies of Toulouse, France.

“The weather was closing in and we wanted to take off before that, we need a minimal ceiling height of 2000 feet for first flights,” said Patrick du Ché, Head of Development Flight Tests.

Many famous aircraft from the Caravelle to Concorde and A380 have first taken to the skies from these runways.

But in a week when Airbus produced so many other headlines, this almost shrannk to a marginal event compared to Tuesday’s surprise news of Airbus taking a majority stake in Bombardier’s CSeries program and reports about various corruption cases surfacing again on the morning of the first flight.

But then the A330neo is not a completely new aircraft, it’s a refinement of the A330 in service since 1994.

The take-off for the first flight, which took a total of four hours and 13 minutes, demonstrated an important advantage: the aircraft is extremely quiet thanks to Rolls-Royce Trent 7000 engines.

“Their noise amounts to 6dB less versus the Trent 700 used on the A330ceo, because the bypass ratio has been doubled from 5:1 to 10:1, meaning it only emits half the sound energy,” explained Chris Davie, project director at Rolls-Royce.

The fan diameter is now 2.84m (versus 2.47m), meaning it is wider than the fuselage diameter of Concorde – and making the Trent 7000 11 per cent more efficient.

And, of course, there are other improvements.

The wing span has been extended by 3.70m to a total of 64m, now with integrated sharklets.

The upper belly fairing and new slats result in aerodynamic enhancements that add another 4 per cent efficiency improvement.

The distinctive cockpit windscreen has been transferred from the A350 to the A330neo.

Inside the cabin, Airbus offers the newly branded “Airspace” interior, also taken from the A350. Thanks to a new lavatory design, a modular Space-Flex galley and optimized lower deck crew rest, up to ten additional seats can be installed while the airframe itself remains untouched.

Airbus boasts its 8 abreast Economy cabin with seats 18 inches wide, while competitor Boeing installs 9 abreast at just 17 inches in its 787.

While two flight test aircraft will accumulate 1,100 flight hours in the coming seven months or so to gain certification in mid-2018, the new cabin will be tested on the first production aircraft MSN1819. This aircraft will ultimately be delivered to launch operator TAP Air Portugal next year.

Compared with the base models, range has been increased by 280km  and 460 km, respectively.

In Toulouse for the flight, Airbus chief executive Fabrice Brégier said the maximum take-off weight of the A330neo would be increased from 242 tons today to 251 tons by mid-2020. This would enable to increase the range versus the A330neo base model by up to 1,300 km, and even 2,700 km versus the A330ceo.

The reason for this is to become more competitive with the popular Boeing 787-9.

The A330-800 has only been ordered by Hawaiian Airlines with six.

Almost coinciding with the first flight, Hawaiian chief executive Mark Dunkerly has expressed doubts about the A330-800 order and apparently is now more fond of the Boeing 787.

This raises doubts if the smaller A330-800 will find takers at all and whether it will suffer the same fate as the A350-800, which Hawaiian Airlines had ordered originally. Hawaiian transferred its orders to the A330-800 when it was told the smallest version of the A350 would not be built.

Airbus will continue to produce the A330ceo and A330neo models, up to a rate of six per month maximum, until well into the next decade.

The hope is to earn more than the development costs of US$2bn, as Airbus aims to sell about a thousand A330neos.

The restart of the program is an impressive confirmation of the A330 concept, almost a quarter of a century after its first flight.

It is a late-bloomer, because in its first years the twin stood very much in the shadow of the almost identical four-engine A340.

That, however, was abandoned in late 2011 after delivering only 375 aircraft.